On Friday I made mention of little neck scarves so I thought I’d elaborate on that today. 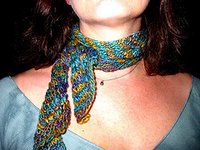 I HATE things to touch my neck. So there are certain necklaces I can’t wear…certain tops. And you’ll never catch me wearing a turtleneck.

Every time I go to a new hairdresser, I have to explain this problem. (Yikes. Going to a new place today.) They put those capes on me and they hit in the worst spot on my neck. So I either have to put my hand there the whole time or tell the hairdresser to loosen it for me. I went to a really cheap place once (like Fantastic Sam’s or something) and they made me wear toilet paper around my neck. It was like torture!

And speaking of torture, one hairdresser told me I was probably decapitated in a past life.
Okay, that didn’t freak me out.

But back to the scarves: Everyone in the sorority house was wearing them and I always refused. One night we were all going out and I borrowed this lime green shirt from my roommate. We started to leave and Court Report said, “You know what would go great with that? This lime green scarf I have!”

For some reason I agreed. (I guess because she was right; It did look pretty cute.) But I was miserable. All night I tugged on the scarf, tried to loosen it or just kept one finger stuck between the scarf and my neck. Then when we got back to the sorority house and everybody went to bed, I started to remove the scarf. What a relief it would be to get out of this thing, I thought.

But it wouldn’t come off.

I couldn’t untie it! I needed help but everyone was asleep. I ran around the house, looking for lights under doors. I finally found one in the room of these two younger girls. I knocked on the door and when they answered I exclaimed, “Free me from my scarf!”

They began trying to untie it and they couldn’t do it either. “We may have to cut it off,” one girl said. “But Courtney will kill me!” I answered. (The Court Report nickname came later.) So they kept working on it. And since I don’t walk around with a lime green scarf on everyday, you know that I was eventually freed. And they did not have to get out the scissors.

But I never wore a tiny, silk neck scarf again. And that’s one trend I hope doesn’t come back in style. They’re impractical, really. They serve no purpose. It’s not like I need something to hold my neck up.

Now banana clips, on the other hand, those things deserve a comeback. 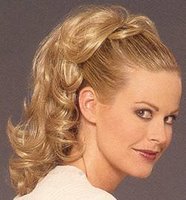 Posted by Writinggal at 8:13 AM

I kind of felt silly wearing one but I did. There was a lady in Mexico last June that we called "the scarf lady" because she wore one all the time: to the beach, to dinner, to town...we thought it is a little warm for that scarf!!

I'm all about neckerchiefs making a comeback. I love those things! To me they are more comfortable than big, clunky necklaces.

Thea, you looked cute in the scarf!

Just say no to the banana clips though, those things looked awful on straight hair!

CC: Maybe that lady had a rash on her neck?

TfT: You're a trendsetter so if you wear one, they'll come back.

SisK: You're right. If banana clips come back then perms will have to too. I never had one so I'd still like to try it (the b-clip).

Oh, and I did good at the salon today. I almost suffered through the too-tight-cape but then she asked me if it was too tight and I said "Yes!" and she loosened it. Schwoo.