Pickin' up some apps

When our college graduation was upon us some eight years ago, most of us were sending out resumes (we faxed them back then, sometimes even mailed) and going on interviews (we wore skirt suits with panty hose, shameful).

But one of Frank's friends announced, "Well, I'm about to graduate. I gotta go pick up some applications."

Applications? You don't "pick up applications" after spending four years in college. You don't randomly walk into Taco Cabana and ask, "Y'all hirin'?" When you fill out applications you have to list your high school, even your elementary school. And there's like a whole page for listing your felonies. They ask that you write down how much money you want to make per hour and what shifts you're available to work.

No, the rest of us were above that. We even printed our resumes on speckled-sturdy-stock paper. Mine was a shade of blue. I thought it gave me an extra edge.

Well, today, I lost my edge.

I wanted to see about teaching spin at a gym here. As most of you know, up until two days ago, I taught spin in Dallas. They don't have 24 Hour Fitness here so I had to venture into L.A. Fitness. I felt like a 16-year-old. It was just like when I used to drive around at the beginning of the summer, wandering into restaurants, retail stores and the mall, asking, "Are y'all takin' applications?" That's how I ended up at Sonic.

So I walked in and I'm like, "Hi! I was an instructor in Dallas and I wanted to see about teaching here. Is there someone I can talk to about that?"

The girl behind the front desk made me fill out an application. I did it: the elementary school, high school, random references, the pay per hour, the felony charges, the works.

I did feel somewhat proud when I wrote down my college degree: Bachelor of Science from the University of Texas. Pretty impressive. Surely I'm qualified to teach spin. I confidently handed the girl my application.

She said, "Um...I think you messed up on your address. You wrote that you live in Roswell, Texas."

Oops. I wonder if Sonic is hiring.
Posted by Writinggal at 9:02 PM 4 comments:

I'll miss you, yellow kitchen. Thanks for the food, friends and fun. Let's try this as a slideshow!

You know I love my HGTV. When I called to set up cable in our new house and the cable gal was rattling off packages, I told her, “I just have one question. Does that package include HGTV?”

She said, “It includes ESPN, MSNBC, the Discovery Channel…” and I said, “I don’t care about that, dammit! Tell me if it has the HGTV!!”

I gotta have my House Hunters. You see, I not only watch it, I Tivo it. I watch as many episodes as I can—even the international version. And when I’m not Tivo-ing HH, I act like I’m living it. When we went house hunting in Atlanta (and yes, I did research being on the show but apparently they’ve got plenty of hunters right now), I kept doing commentary like we were on House Hunters:

“The next day Jackie took them to see a smaller but updated townhome in the city…” I would say as our realtor opened the lock box. She’d ask, “Who are you talking to?”

“Oh, I’m Suzanne Whang, host of House Hunters.” Then I would make Frank list the pros and cons of each house with me. We really did have it narrowed down to three. We would have been perfect for the show! Plus, our natural good looks wouldn’t hurt either.

The other day I knew I had hit a House Hunters high (or low). Not only was this particular episode I was watching a re-run, it was one I had already seen and I still watched it. It was this cute couple with this little girl named Nellie. They lived in Virginia and were looking for a new house in a really expensive part of town. Even though I knew which house they picked, I found myself yelling at the screen:

“No!! Not the one with 1.25 baths! You need two full baths! What are you crazy? That room doesn’t even have a closet! I can’t believe you’re paying 700K+ for this! You should have gone with house #2!”

Then yesterday I was watching another episode that I had Tivo’d. Frank came into the living room just as I was saying, “Nice!” in response to an updated kitchen. “Are you talking to the house hunters?” he asked.


And then, my favorite part: when Suzanne says, “So which one did they choose?” and they review the three houses one last time with that bee-boppy music and clever descriptions:
House #1: Bungalow in the city with high price tag
House #2: Affordable space in the suburbs
House #3: Updated townhome; single car garage

The whole experience is exhausting. Sometimes I break a sweat. So why would I need the cable package with ESPN? I’ve got plenty of sports to watch.
Posted by Writinggal at 11:39 AM 5 comments:

Frank with the Glasses

In college Frank introduced me to this friend of his. I think her name was Kara. I don’t remember much about her except that she wore glasses. So from then on, whenever he would mention her, I’d say, “Who?” and he’d say, “You know, Kara…she’s Janna’s friend…you met her in the computer lab…” and I would say, “Oh! Kara with the glasses!”

He thought this was amusing because she didn’t always wear glasses. She just happened to be wearing glasses the day I saw her. He’d say, “She’s not ‘Kara with the glasses.’”

So that became a thing—labeling people for conditions that are only temporary:

“Cindy with the big earrings.”
“Stan with the camouflage t-shirt.”
“Jason with the fanny pack.”
“Erica with the booger.”

If some sort of temporary condition were to strike us, we’d also call it out:

“I’m Frank with the cold sore!”

“I’m Elsa with the giant pimple!”

This weekend Frank got pink eye and he had to wear his glasses from sophomore year in high school. They’re big and bulky and—seeing as the prescription is about fourteen years old—not very effective. When he realized that he would have to wear them out in public (to a bar, no less), he said, “Oh, no! I’m Frank with the glasses!” 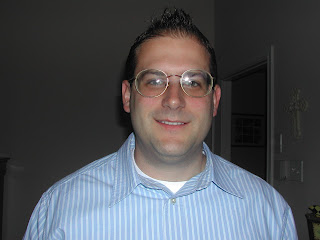 When he went to the eye doctor on Sunday (one of those mall eye doctors—they’re open all the time), they told him he’d have to be “Frank with the glasses” for three more days. He couldn’t take it. He broke down and actually purchased new glasses. And since it was a mall eye doc, he got them an hour.

Check him out. I think “Frank with the glasses” is pretty cute. 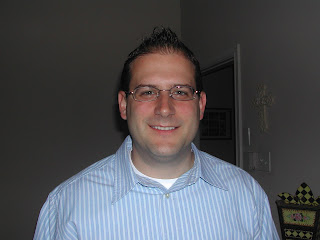 I just hope he’s not too good for “Elsa with the retainer.”
Posted by Writinggal at 8:24 AM 7 comments:

I may not speak French but I know that répondez s'il vous plait means " get off your ass and tell the person if you’re coming or not." And I’m a stickler about it. I usually respond the day I get the invite which means that I’m at the top of the hostess’ list. I wasn’t ever sure if that afforded me any particular party rights but I knew it made me feel good

But you have to think that the host/hostess probably tells the guest of honor (who is presumably the one you’re friends with) who’s coming. So if the h/h tells the GofH from the get-go “Elsa called…she’s coming” and then every update after that ends with “Oh, and you already know Elsa’s coming. She RSVP’d the first day…” then the GofH starts to get used to the idea that you’re coming.

Last week I tried a different approach, completely unintentionally. I RSVP’d that I would not be attending a baby shower. But at the last minute my circumstances changed and I was able to attend. Instead of telling the GofH that I would be coming, I kept it from her. I only called the hostess the night before and told her. Now this is somewhat poor form because it’s not as if the hostess can order more food at this point or change anything, but still, I thought I should tell her. She probably thought, “What’s another person? How much cake can she eat?” She didn’t know me very well, obviously. (And by the way they only had one of those diaper cakes. It was an awkward scene when I tried to cut into it.)

But because I didn’t tell the GofH I was coming, she was very surprised and thrilled to see me. And since she was pregnant and hormonal, she even cried!
Check it out: 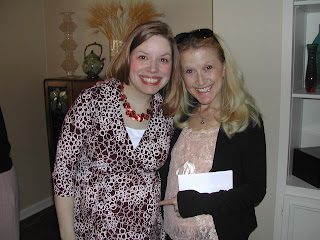 Okay, well she wasn't sobbing but if you look closely, you can see the tears. Yes, my presence brought tears to the GofH's eyes.

Speaking of presents, I didn’t even bring one because I had already sent one online. I just brought a card stating as much.

All in all, it turned out to be a wonderful strategy and I had a nice time despite the diaper cake catastrophe.
I actually have a baby shower to attend this weekend and I’m thinking of pulling the same stunt. Or maybe I’ll find out what kind of cake they’re serving first.
Posted by Writinggal at 5:53 PM 2 comments: