And the Mystery Reader is... 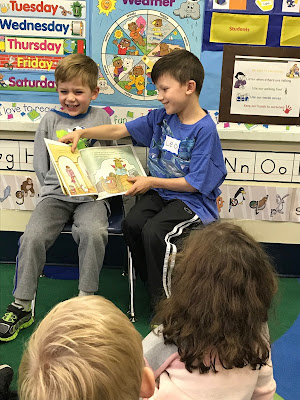 Gus was SO excited when the mystery reader was revealed at school today and it was his big brother! He shrieked, "LEO!" and ran over and gave him a hug. (It worked out to have Leo do this because Gus started back to school two days earlier than Leo after winter break.)

I won't get into the long journey it has been to get Leo to a place where he could read a whole book, especially in front of a group of five year olds! But let's just say it was a journey and it was long. Which I guess I already said. And now Leo is an amazing reader!

Was he completely appropriate during his mystery reading time? No.
Did he stick to the script? No.
Did he read awesomely? Yes.
Is awesomely a word? Probably not.
Is Gus wearing a pajama top at school? Yes. Have to pick your battles.
Am I doing that annoying thing where I ask myself questions and then answer them? Yes, but I plan to stop after this one.

Leo was so impressed with himself: "Let's talk about what a good job I did being the mystery reader." That discussion turned into a business idea: Leo plans to have a store where he reads to kids all the time. And he will give them treats too. I said he will have to charge enough to cover the cost of the store. He changed his plan and said he will read to the kids in the woods.

So when he is a grown man luring kids into the woods with books and candy, we can say this is where it all began! 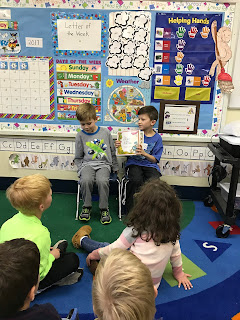 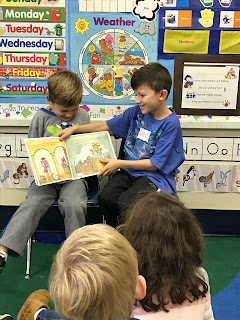 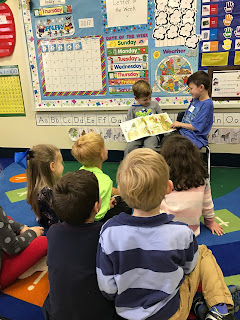 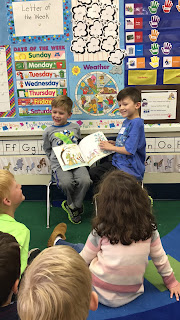