Gus has a mild obsession with the teenagers who mow our lawn. He learned one of the guys' names quickly and referenced him in the car one day:

So when his heroes showed up yesterday for lawn maintenance, this is where Gus parked: 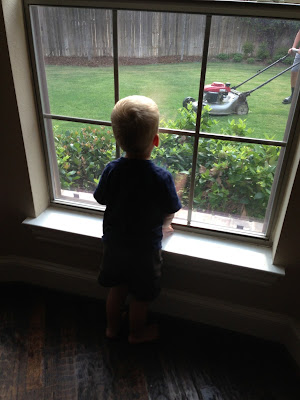 And even though they did a fine job, he still insisted on mowing it himself.

I will play! Hi, this is Gus. I have temporarily taken over mommy's blog so I can tell you all about what I've been doing this week. I've uploaded lots of pictures and videos because, like most kids, I'm way better at technology than my parents.

So here's what's been happening. On Tuesday, mommy, Leo and I drove to Fairfield, Texas to have lunch with Grandmother and Grandpa Ron...or so I thought. I was having a good time, dipping French fries in catsup and licking it off, when all of a sudden, Leo gets in their car. Of course I then shouted, "I sit Rah Rah car! I sit Rah Rah car!" Despite my very articulate plea, I still ended up in mommy's car.

I should have known here, as we took this picture, that something was up. Look how excited Leo is to go to Grandparent Camp! 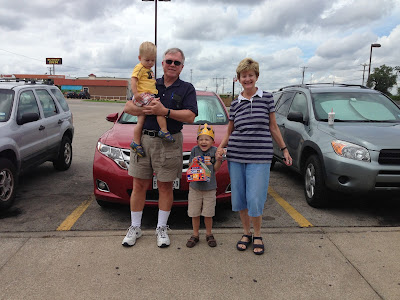 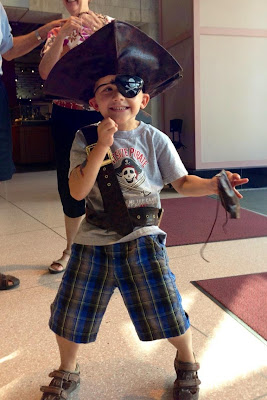 While I am super jealous, I am making the best of it. Here is what I have been up to this week, along with soaking up all of mommy and daddy's attention.

Playing IN the water table; it's VERY hot. 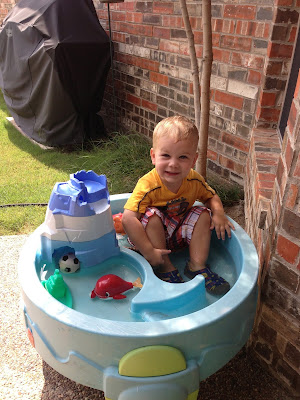 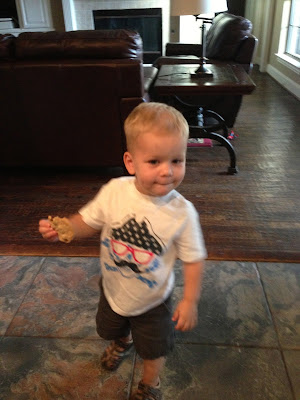 Eating mac and cheese, right out of the pot! 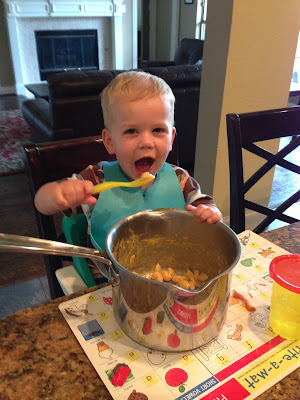 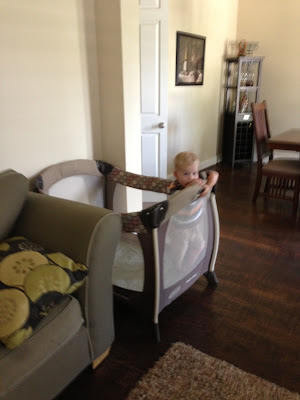 Playing at the new splash park at Frisco Commons. Leo hasn't even been here yet! 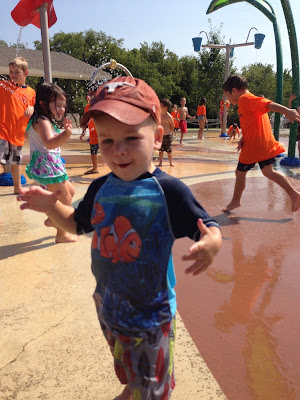 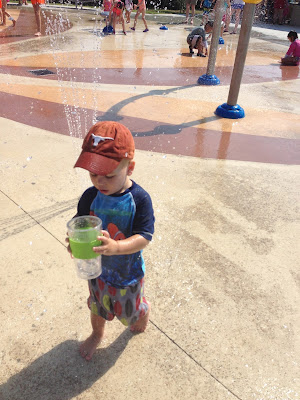 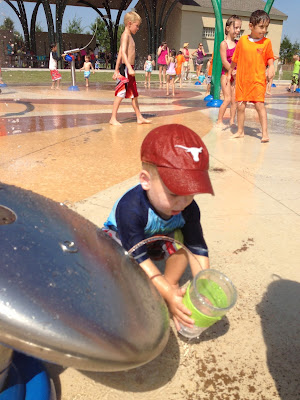 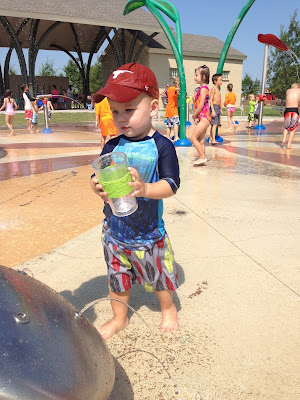 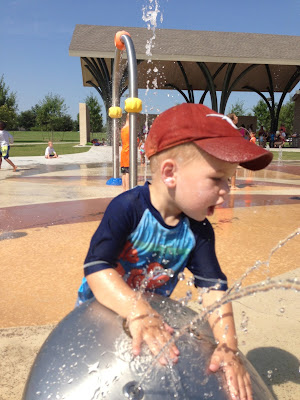 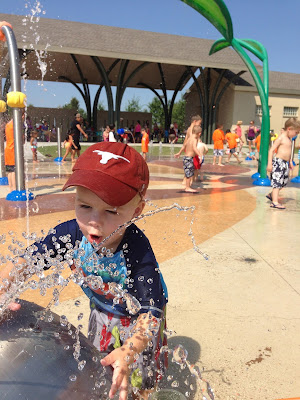 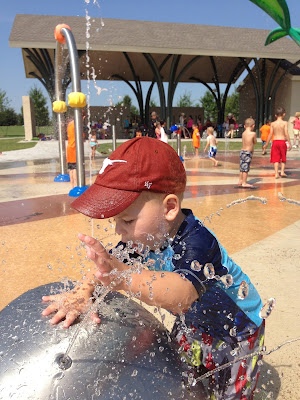 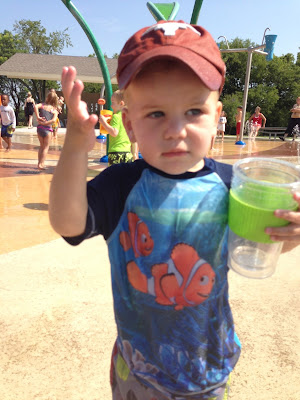 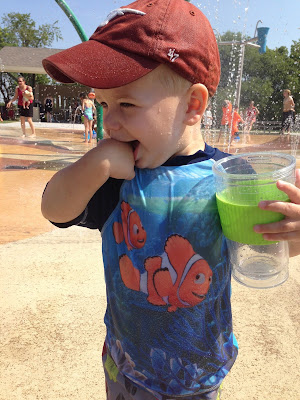 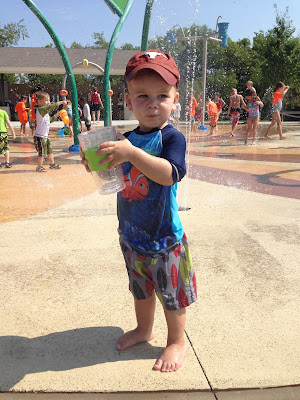 Now this video is not all that exciting of me, but it could be used as evidence in court for this fight that starts to break out among the three kids in the background. It got pretty intense after this! There was some water thrown, some words yelled, some children storming off.

And here I am making a request to go to Race Trac after we passed one.

We don't care if it's hot as you know what, we are having fun this summer! Last summer we had just moved here so we didn't know the lay of the land. Plus, Gus was still a baby and not as portable. Now I've got two KIDS on my hands, rather than a baby and a kid, so we can do all the summertime activities.

One of our favorite places to cool off is the Frisco Athletic Center. We got a membership there just for the summer so we could use their awesome pools. (It's very reasonable for residents to join because it's a city facility.) The indoor pool has a great kids splash area with two slides and lots of "water traps" as Leo calls them. Leo likes to hang out on the top area and set them off.

When we first started going here this summer Gus would not go down any of the slides. But when he saw his younger friend Rowan ("Row Row") do it, he acted like he was a slide veteran.

Here are two videos of Gus having a blast on the slides!


I don't have any pictures of the boys at the outdoor pool but I grabbed a couple off the web.
Here is the splash pool we play in. Gus went down the little red slide and the green slide for the first time today! And do you see that mini water tower? When the whistle blows it explodes and a ton of water dumps all over you if you're in the "right" place. 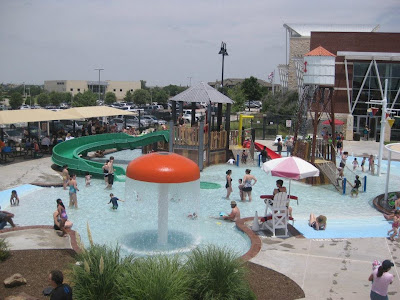 And here's a pic of the whole thing. We hit the big pool and the lazy river when Frank comes with us on the weekends. 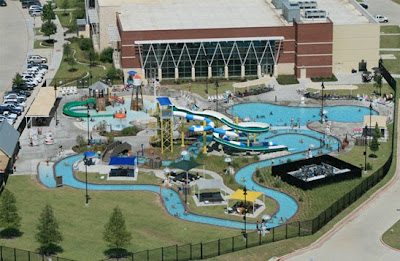 Frank and I even took turns going down the big slides! Oh, and I forgot to say that, of course, Leo does all the slides in the splash pools with no problem although he was too busy with the water traps to perform for my videos.

Stay cool. We are!

I bumped into a friend the other day and, gossip that I am, asked her about another friend that I haven't seen in awhile. She said that this other friend is in a serious relationship with a guy who has been married twice before. "Apparently his ex-wives are both crazy," she said with an eye roll.

I'm not buying it either. That's because I have a theory and it goes something like this: If someone says to you that they have a crazy and/or psycho ex than that person must be, in fact, crazy themselves.

There's really no way around it. I'm not talking about if they went on one or two dates with someone and realized that person is crazy. That could happen and the person claiming that the other is crazy could still be sane. But if they actually had a relationship with the alleged crazy person, then they fall under my theory.

So either way, he's crazy, right?

If you start to date someone and a few dates in they mention a "crazy ex" of some sort, there's no way it can end well.

You would have to ask them: "What did this crazy person do?"

He might say, "She called me ALL THE TIME. If she ever saw me with another girl, even a co-worker, she would go like psycho on me. And one time, she left a trail of graham crackers all the way from the entrance to my work to my desk where she had decorated my cube with troll dolls.
"

"Were you chained to her? Why couldn't you break up with her?"

"I tried! She wouldn't take no for an answer. She was CRAZY, I tell ya!"

"How long did you date?"

"Off and on for two years."

That's when you say, "I need to consult Elsa's crazy ex theory but I'm pretty sure you fall under the category of certifiably crazy."

You see, there is no such thing as a "crazy ex," only a crazy couple. I do hope this helps you to weed out the crazies in your life and let them all just be together. 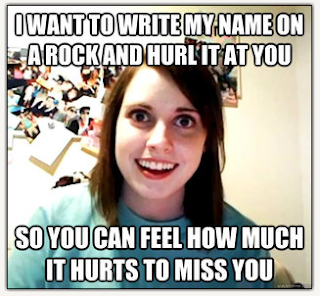 A Perfect 10 for Gus too

A few months ago I posted a blog with some boring videos of Leo in gymnastics class.  Today Gus took a free trial class at the same gym. I guess it runs in the family because Gus did great at gymnastics too! And because of that, I have more boring gymnastics videos for you to watch!

Actually, these are a little better because I was there in the class so they're not through the glass and Gus is two so they're pretty cute. No offense, Leo.

And here are some pictures too: 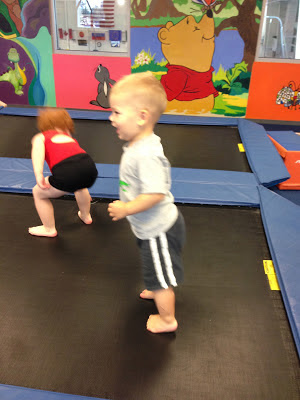 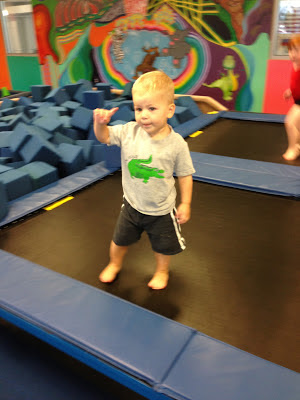 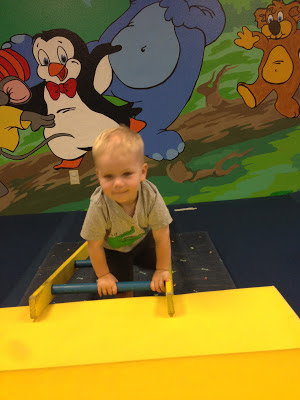 Of course he had to take a little break to shoot some hoops. 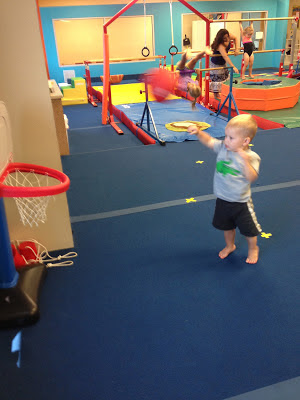 I think he's a natural! And even if he wasn't, having him in this class while Leo is in his class is SO much better than chasing him around the waiting room.
Posted by Writinggal at 4:05 PM 3 comments:

So these videos aren't exactly worthy of America's Funniest Home Videos and I don't think Bob Saget even hosts it anymore...but still, I've been taking lots of videos and I needed somewhere to put them. So here ya go!

Leo found my jump rope, resistance band and a storage box and did what any 5 year old boy would do--turned it into a dog sled!

Gus likes jumpy/bounce houses but never did the slides...until today!

Here is Gus counting up all his drinks!

Leo, recounting a story he learned at Vacation Bible School