I don't keep things for very long. That's why I buy clothes from Target and Old Navy; they're practically disposable. But there are three things that I have owned for a significant amount of time:

I am going to elaborate on the spin shoes so if you were hoping for more on my fraction calculator or glasses you're out of luck. You can just stop reading.

So when I started spinning in 2004 I immediately got the shoes. I had to look the part. The funny thing is I don't clip in when I ride outside. And the even funnier thing? I rarely ride outside.

But these spin shoes have been with me through TWELVE years of teaching spin classes...there were times when I taught four-five times a week, sometimes twice a day. And there was a good stretch between 2007-2012 when I taught consistently twice a week on Tues/Thursday. I taught right up until the end of both pregnancies. There were times I didn't teach--after having a baby, after moving and not getting connected with a gym right away. So based on all that, here is how many times I think I taught in those shoes. (Good thing I have my trusty fraction calculator to figure all of this out!)

750! I think I have taken and/or taught 750 spin classes in those shoes. That's 11,250 miles (assuming each spin class is about 15 miles)! Damn. Imagine if I did actually ride outside!

These spin shoes have been good to me. The only thing I have had to change on them is the shoe laces. I've lugged them around in my black Motorola Marathon 2004 backpack (hey, I may have quit running but I am proud that of that backpack!) for twelve years.

So that's why it was quite anti-climatic how my beloved spin shoes ultimately met their demise. I was subbing a lunch-time spin class (since I'm now focused on Tabata, I don't have a regular class of my own), and the worst thing happened--ONE person showed up. I would SO much rather NOBODY show up than one. But she did. And she was perfectly fine being the only one there so I had to be fine with it too. We got through it and she was a lovely person and we had a good ride. Afterwards, I unclipped, got off the bike and went over to get a wipe for my bike. As I walked on the gym floor I had this brief,  passing thought that the floor felt a little uneven. And then I took off my shoes, put them in my marathon backpack, put on my flip flops and left.

The next day I received an email from my manager, which went to a few of us spin instructors who had taught in the last couple of days. She said that the weirdest thing happened. They had found the sole of a spin shoe still clipped into the instructor's bike. They had to work really hard to pull it off; someone even broke a nail! She asked if any of us knew anything about this. I read it and almost wrote back, "No, that's weird!"

And then I remembered that weird feeling about the floor. I ran upstairs to my backpack and pulled out my spin shoes and GASPED when I saw this: 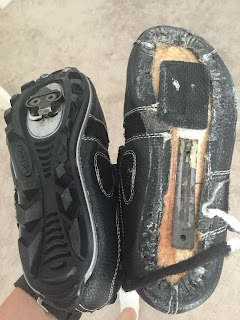 How did I not notice that the sole of my shoe didn't come off the bike?!! Anyway, I fessed up and had to say goodbye to my trusty spin shoes that have been with me through 750 classes, 11,250 miles, two pregnancies, six different gyms and four moves.


It had been so long since I had bought spin shoes; I didn't even know what the kids were wearing these days! So I went with these: 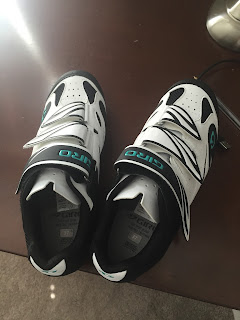 Because even though I'm not teaching a regular spin class right now, it's still my first love. Well, I guess my second after running. Which I do not love.  So I guess running is more like an ex-boyfriend whose backpack I still carry around.

Hopefully these bright white spin shoes will be with me another twelve years, which would make me 53!