Leo on the Map

Leo really hit the teacher jackpot this year in first grade. No only does he have his main teacher who he says is "The Queen of First Grade," but there are all of these helper teachers that come to his class that he really likes.

And they did the CUTEST project recently. I had to post it on the blog so I would have it documented. I mean, this is something I won't even throw away but still, it's hard to dig through a memory box and find it. Actually Leo gets out his memory box about once a week. He once sat in our foyer and greeted guests with it. "Do you want to see some artwork I did in preschool? Did you know I donated money to service dogs for my birthday?"

But the recent cute project is called "Me on the Map" and it shows Leo's world, starting with his room and ending with his continent. This little person on the string is supposed to be Leo. Gus has gotten to it so it's not attached anymore but the idea is you can put Leo in each of these places. Here are a few highlights: 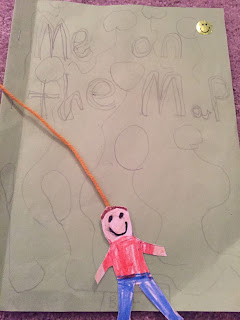 It was Christmastime when he did this so there is a Christmas tree (on his floor?) 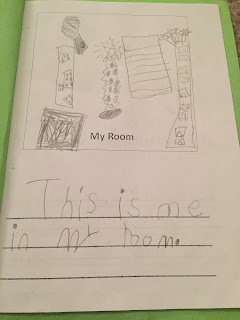 He sort of got the placement of our house right. We are on the other side of the cul de sac. 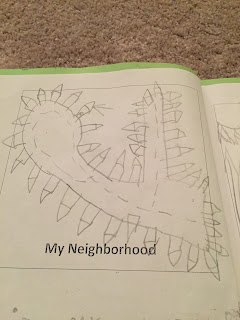 This one is my FAVORITE--his city. Target ("Targite"), church and Kroger. That is our little bubble! 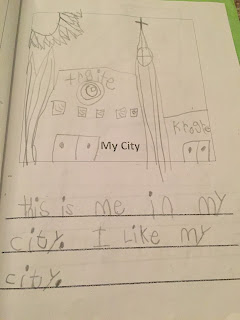 And this one is funny because he thinks his state is North America! 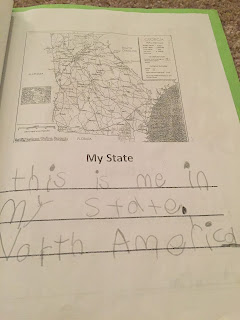 So that is a glimpse into Leo's perspective. His teacher may be the Queen of First Grade, but he is the King of his own little world, Targite and all.

An unusual thing happened this week. I got to hang out with Leo--just the two of us. See, usually it's Leo, me and Gus. Or Gus and me. Or Frank and Leo. But rarely is it Leo and me (at least since 2011).

But Gus started back to school after Christmas break a day earlier than Leo so that left just us. We had been invited to play at Carrey's house and then I planned to take Leo to the mall to get new shoes. I told him we could do other fun things at the mall too. Leo suggested Build a Bear. I was thinking things that didn't cost hundreds of dollars like, look at the Lego store, go on the merry go round, maybe even take a ride on the overpriced train (it's $4 for a FIVE MINUTE ride!! They even charge the parents!!) just for old time's sake.

He said, "Too Much Tuesday."

Loved it. Way better than a date with your mom.

So after we gladly dropped off a tantrum-throwing Gus ("I want to bring my sword in the car!!!") we headed to Carrey's for the play date. It was heavenly. I got to talk with the other moms, sip coffee, eat a delicious quiche. If Gus had been there, I would have had to hover around him, making sure he didn't tackle all the kids. And not long ago, I would have been doing the same thing with Leo.

Then we set out for the mall. He walked beside me with such ease. Walking with him anywhere used to be such a struggle (as it is now with Gus). I used to compare it to pushing a grocery cart with a bad wheel.

And he was agreeable and cooperative! He even (albeit reluctantly) came with me to peek in the American Girl doll store for about thirty seconds. Buying shoes (a Star Wars pair with Kylo Ren from Episode 7) was fun and easy. Browsing the Disney store, the Lego store...all calm and peaceful. This is such a contrast to how he is when he is with his brother (both wild and crazy, like caged animals).

We then made our way to the food court and had a lovely lunch while Leo played with the little Lego people he had purchased. When I let him get ice cream at Chick Fila he said, "This really IS Too Much Tuesday!"

I told him, "I like hanging out with you. When we divide up kids, I should get you more often, even though I know you like to hang out with daddy."

Leo said, "I don't mind which one of you I hang out with. Some kids like one parent more than the other but I don't feel that way."

He didn't add, "You're both equally awesome" but I think that's what he meant ;)

The best thing that happened to us on our Too Much Tuesday was that I accidentally left my phone in the car. Sure, I never knew what time it was and I had to keep asking store clerks but it also meant I didn't check texts or emails and I didn't take pictures of our outing and post them to Facebook (even though I so badly wanted to write #toomuchtuesday). Leo had my undivided attention.

So I have no photo evidence of this fun day with Leo. And that's okay. I do have this selfie we took two days before. I was trying to show him that we look alike. He wasn't buying it. Just like he didn't let me buy anything at the American Girl store. 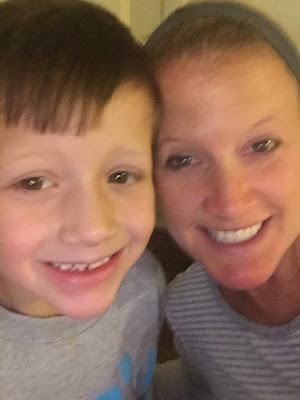 7 and 4. Those have GOT to be the peak ages for Christmas. They understand that it's Jesus' birthday. They want presents that are still fun, cute and affordable. They are fans of Santa. They are easily impressed. They're still cute.

So, just in case it's all downhill from here, I captured some pretty memorable videos from Christmas morning. I think what I will remember most about this Christmas was that this was the year that Gus received a stuffed animal in the shape of poop.  Ah, it's so fitting given we've spent about two years potty training him. (Now that's a memory I'd like to forget. At least I hope I can call it a memory now.)