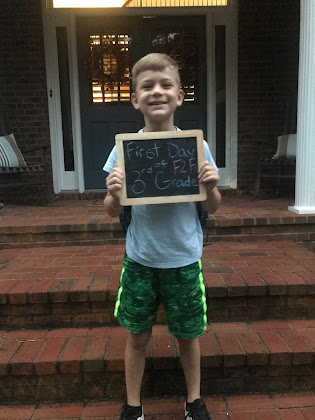 Gus (age 9) is a funny, honest, handsome, athletic, smart little boy. He is also chronically confused. A dialogue between the two of us often sounds like "Who's on First?" They are more like conver-cusions rather than conversations.

As Gus was heading back to regular school last week (for one day), I asked him if he wanted to bring his lunch or buy. He said he wanted to bring so we started negotiating what would go in his lunch box. Curious, he asked what they were serving at school. I pulled up the menu and showed him that the options were orange chicken with rice or a "jamwich" pack. He mulled it over and considered changing his plan. "Well, I could get the jamwich pack and if I don't like it, I can always go get a muffin or something."

"No, let me explain how it works now," I said. "Things are different because of Covid." (Parents utter those last three words to their kids all day long.) "You can't just walk up to the cafeteria line after you get your food and get other things. They don't have other things. It's grab and go. They just have what is on this menu."

"So, are we eating in our classrooms?" Gus asked.

"No, you are eating in the cafeteria but that's different too, like they will have empty seats--"

"Are you going to pick me up before lunch?" Gus asked.

At this point I am exasperated because, by the way, we are having this discussion in the morning, BEFORE school when time is crunchy. "No, Gus! That is why we are packing this lunch right now!"

"Do I eat this lunch outside?" Gus asked.

Gus, looking completely lost replied, "But you said it's grab and go???"

OHHHHHHHH. Ok, Amelia Bedelia. "You grab it from the lunch line and GO to your seat. And you just don't get up again!!"

In addition to latching onto one thing and taking it literally, Gus also jumps around from topic to topic which makes for complicated conversations:

Me: "There was a storm last night. Did you hear it?"

Gus: "No, I don't ever hear storms when I'm sleeping"

Me: "Well, Smitty heard it and since he is scared of thunder, I slept in the living room on the couch near him."

Gus: "Was daddy already asleep? Why doesn't he ever sleep on the couch with Smitty?"

Me: "Since daddy has to get up really early for work, it is my job to sleep on the couch near Smitty."

Gus: "It's your job? Is that because you bought Smitty? How much did Smitty cost? Do dogs cost money?"

Then I went into a whole thing about how we got Smitty from a shelter and there is a certain fee you pay, like $100, for the shots and stuff they give him but it is not a big cost. I was about to go into the difference between a rescue dog and a breeder dog and the cost when Gus said:

"I just can't WAIT to be able to drive. I think about it all the time! I am going to love driving. I'm saving up now to buy a car. How old do you have to be to drive a car?"

Also, it seems that so far, Geography isn't a strength. We were driving today and we passed a big apartment complex. We were about 15 min from home at this point. Gus says:

"Hey, is that the place we stayed one time with the lazy river?"

"No, we definitely have never stayed there but what place are you talking about?"

It took me a little while to figure out what place he was talking about but finally I realized he meant a condo we stayed at in Fort Walton Beach.

"Do you mean the place at the beach?" I asked.

"Yes!" he said. "And Leo said that the only thing that could make it better was if we had our dog and there were lots of other dogs and he could play video games as he floated in the lazy river."

"So, you thought this place right here was by the beach?"

"So you thought we lived like 15 minutes from the beach?"

"Well, NOW THAT I THINK ABOUT IT, I know that it takes longer to get to the beach like 1 hour and 30."

(It takes 6+ hours if we only stop two times to go to the bathroom and drive thru to get food without eating inside, btw. But I am glad the trip goes by so quickly for him!)

On this same excursion today he said, "If you turn right down that road, that's where my football practice is." It wasn't. Not even close. But he argued with me that it was. Like he would know better than me. I mean, I can actually drive!!

I'll leave you with just a funny comment he made tonight. I was reading Harry Potter and a character talked about how he needed to look "smart" because his relatives were coming. I explained to the kids, "They are saying smart the way the English say it, meaning they want to look nice, not that they are trying to look intelligent." 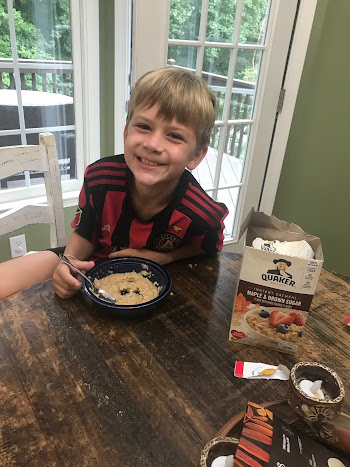