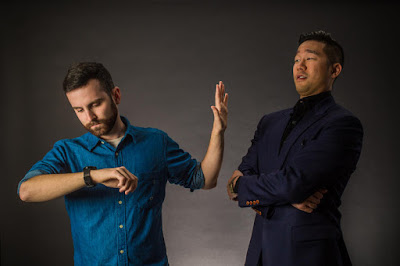 I think we can all agree that phones are killing our society. They cause otherwise normal people to become inconsiderate, self-absorbed and downright dangerous. But since we are all AWARE of that, I think most people TRY to be better, even if they fail at it. Like I think most people realize that sitting at dinner, looking at your phone instead of your dinner companion, is rude. They may not always stop, but they know they are being a jerk.

But here's a new one that is creeping up on us. It's what I call Inspector Gadget style watches. I'm talking about your Apple Watches, your FitBits that have text messaging, etc. (The "etc" is because I really don't know any other examples but I assume they exist.)

People--again, otherwise polite, good-mannered folks--think it is perfectly fine to look at their wrists and read a text while having an in-person conversation with someone else. 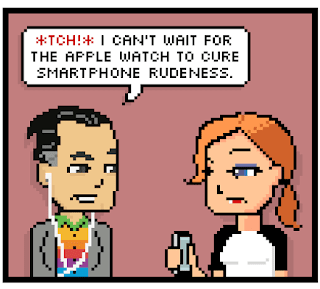 To that you may say, "People do that with their phones too! What's the difference?" With phones, it is possible the device may not be on your person. So if your text dings or vibrates and it is away from you, you won't hear it. You won't check it for a few minutes. And guess what? When you do check it, 99% of the time, it's not important. Not even a little bit.

Yet when someone's watch buzzes on their wrist, no human is unable to resist the temptation to look at their watch. They can't. It's impossible. I don't have one myself but I don't know that I, with my superior will power and awareness of all things related to technology inconsiderateness, could resist that easily. But come on, I would.

I have had two incidents with this in one week which has motivated me to address it:

1. I'm at a party, talking-to a lovely acquaintance. She is always pleasant, always a joy to talk to. I haven't hung out with her that much but I would say she is someone with fine manners. Yet as we were talking, her watch vibrated. Her head immediately went down to look at her wrist. There was no, "Excuse me. I need to check this. I am waiting to hear from my babysitter." Just in the middle of conversation, her head looks away from me and down at her watch.

Whatever was on her watch must have piqued her curiosity (and was way better than whatever we were talking about) so she gets her phone out of her pocket and looks at the text more closely. Again, there is no explanation. Then I THINK she said, "Excuse me" and just wandered off.

The next encounter was with another friend who I think of as having excellent manners. I was excited to tell her about a new rug I had gotten. Just as I got to the punchline--the price, which was crazy low--she looked down at her watch, read a text and put her hands to her head like, "Oh, crap. I just got the worst news of my life." Then she looked back up at me and said, "Oh, sorry. Love your rug. Love the price."

Well, at least she tried to cover.

Sometimes I feel alone in this--like I just have to accept that society is going into the toilet (but not without their phones and watches flushing away with them).

But then I remember Jerry Seinfeld. He has been talking about the problems with phones from the get-go. Like this one. It was so long ago that he was talking about Blackberries. But I love how he compares it to reading a magazine while you are talking to someone:

But back to the watches--because obviously, we have lost the battle with the phones. Can you watch people TRAIN yourselves to not look at your watches just because they buzz?? Or if that is too hard, could you not wear the watch?  Or set it so it doesn't buzz?

Or I don't know, actually look into the eyes of the person you are talking to when she is TELLING YOU ABOUT THE AWESOME, PRACTICALLY FREE RUG SHE GOT???


Because if you keep choosing to look at your watch over me, you are going to miss out on awesome stories such as these.


Posted by Writinggal at 9:35 PM No comments: