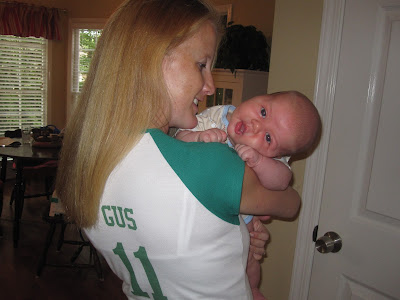 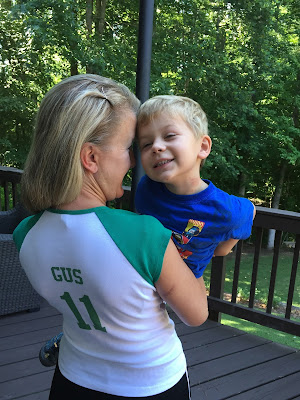 Gus has been here FOUR years!

Gus was an easy baby. Today, I wouldn't call him easy. Lazy, maybe. But not easy.  Okay, lazy is a little extreme…lethargic. He is always up for some downtime. And when he doesn't get it, he's up for some tantrums.

Like yesterday, I took him to Costco and he was wearing his Luke Skywalker costume and holding a sword. (His light sabre had been confiscated.) 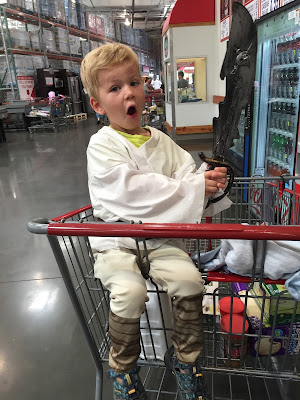 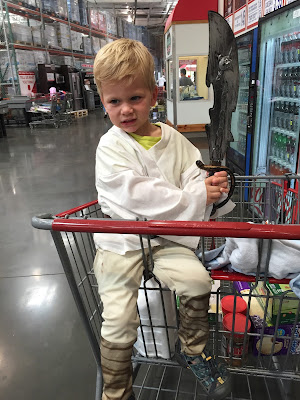 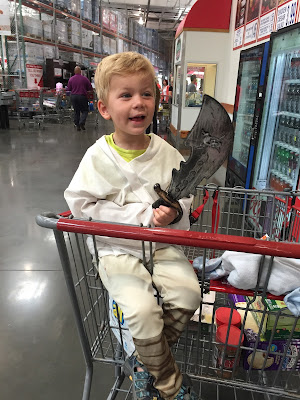 As we walked out he tapped me with the sword. I said, "If you tap me again, I'm going to take it away." And of course he did and of course I did. Cue the screaming. I said, "If you get in your seat and put your buckles on, I'll give it back." He didn't. I said, "Well now you are not getting it back but if you get in your seat you can at least have your shoo shoo." He did. But he still didn't understand why he wasn't getting his sword back so he screamed--I mean blood curdling, ear piercing screams--the whole way home. "I want it! I want it!" I told him, "If you continue to scream, I will throw your sword in the trash when we get home." He did and I did. Screaming continued.

And then a few minutes later he passed out.

Gus still loves his shoo shoo and wants to take it everywhere--even to the pool and the beach! Sometimes he brings it into a restaurant and then says, "But I don't want it to get dirty. Put it back in the car." Really? Cause you dragged it all over Target last week.

Since he has a summer birthday, I like to do outside parties involving water. This year I looked into renting an inflatable water slide but after some quick internet research, I realized it costs only a little more to buy one! So we could have one for a few hours or for THE REST OF OUR LIVES. No brainer, right?  So we bought the slide on Amazon and invited his little friends over. Well, a few days before, I saw rain in the forecast. I panicked and hired a Jedi to come to his party, thinking he could entertain the kids in the basement in lieu of the water slide.

But then, no rain which meant we had the water slide AND the Jedi! Woah, epic 4th birthday party for Gus. We really try not to raise spoiled brats but even after all that, Gus said, "What are we doing next?"

Here are some pics from his Summer-Star Wars-themed party: 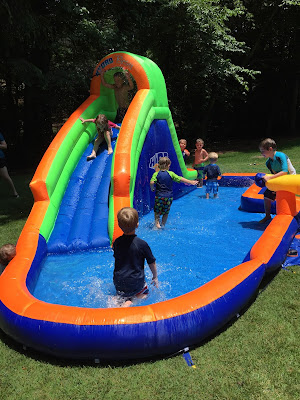 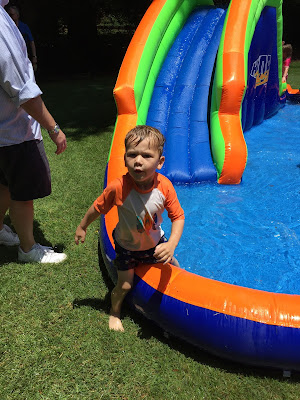 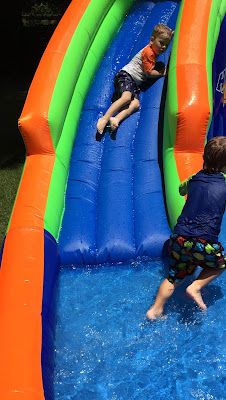 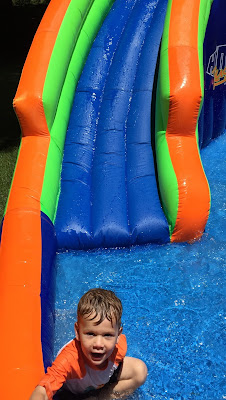 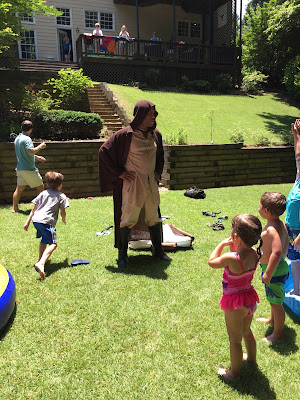 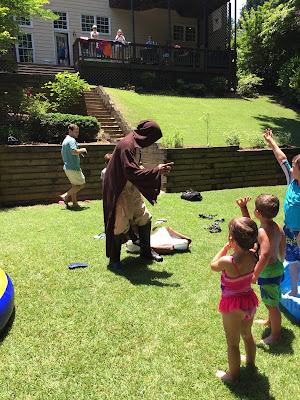 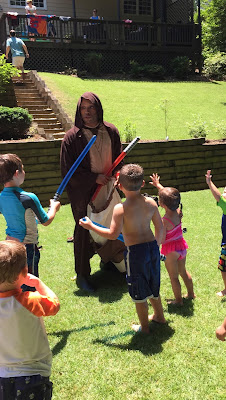 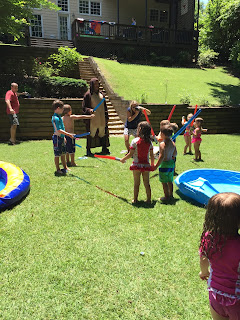 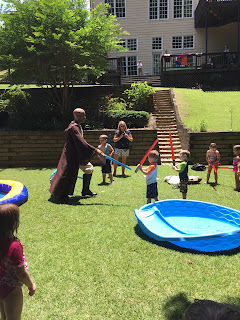 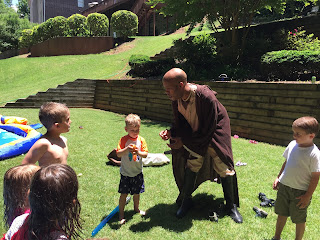 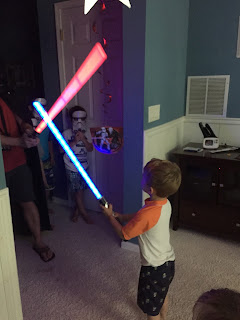 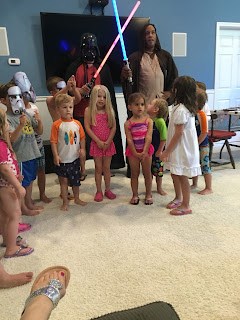 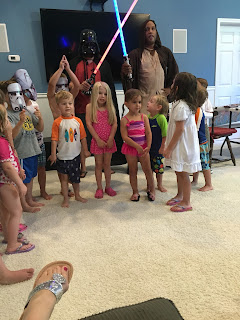 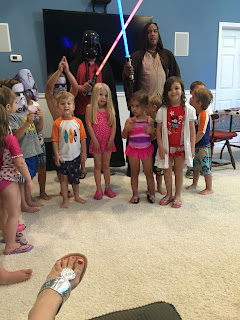 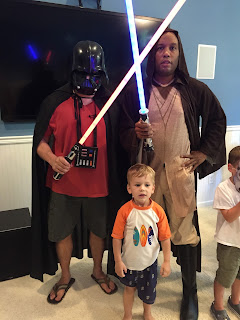 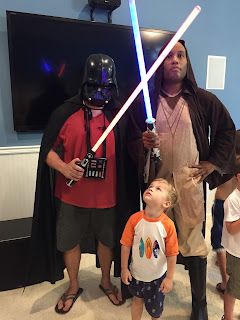 Some kids were a little scared of the Jedi and even of Darth Vader (who was Frank!) but hopefully we didn't send them off with any life-long fears.

Gus is excited to be four--he feels like such a big boy. He is a great little swimmer and can ride his bike with training wheels. He dresses himself. He's also almost as big as his older brother. People think they are just a year apart! 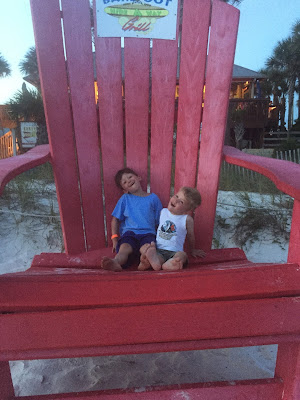 Oh, and I almost forgot to say that Gus still loves peanut butter and jelly sandwiches more than anything else. So we had his friends donate that at his birthday party and Gus and I took it to the North Fulton Community Charities food pantry.  They were actually all out of jelly so were happy to get so many jars from Gus. He got to see them put his jelly right into someone's basket! 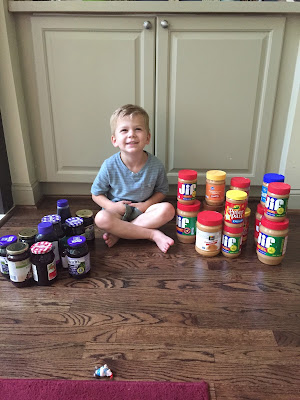 Happy Birthday, Gus! We love you!!