A Snapshot (or seven) of Our Mornings

I found these pictures on my phone and I think they just say it all. But since words also help, I will add in what I believe Gus was thinking when he took my phone. We were parked at the halfway point between our house and Leo's school. I am always frantically getting out Leo's bike, Gus' stroller and the two of them to make sure we can quickly do the half mile bike ride and walk before the tardy bell rings.


"Hee Hee. I have mommy's phone! Oh what fun I am going to have! First, I will take pictures of mommy. What is she yelling about?" 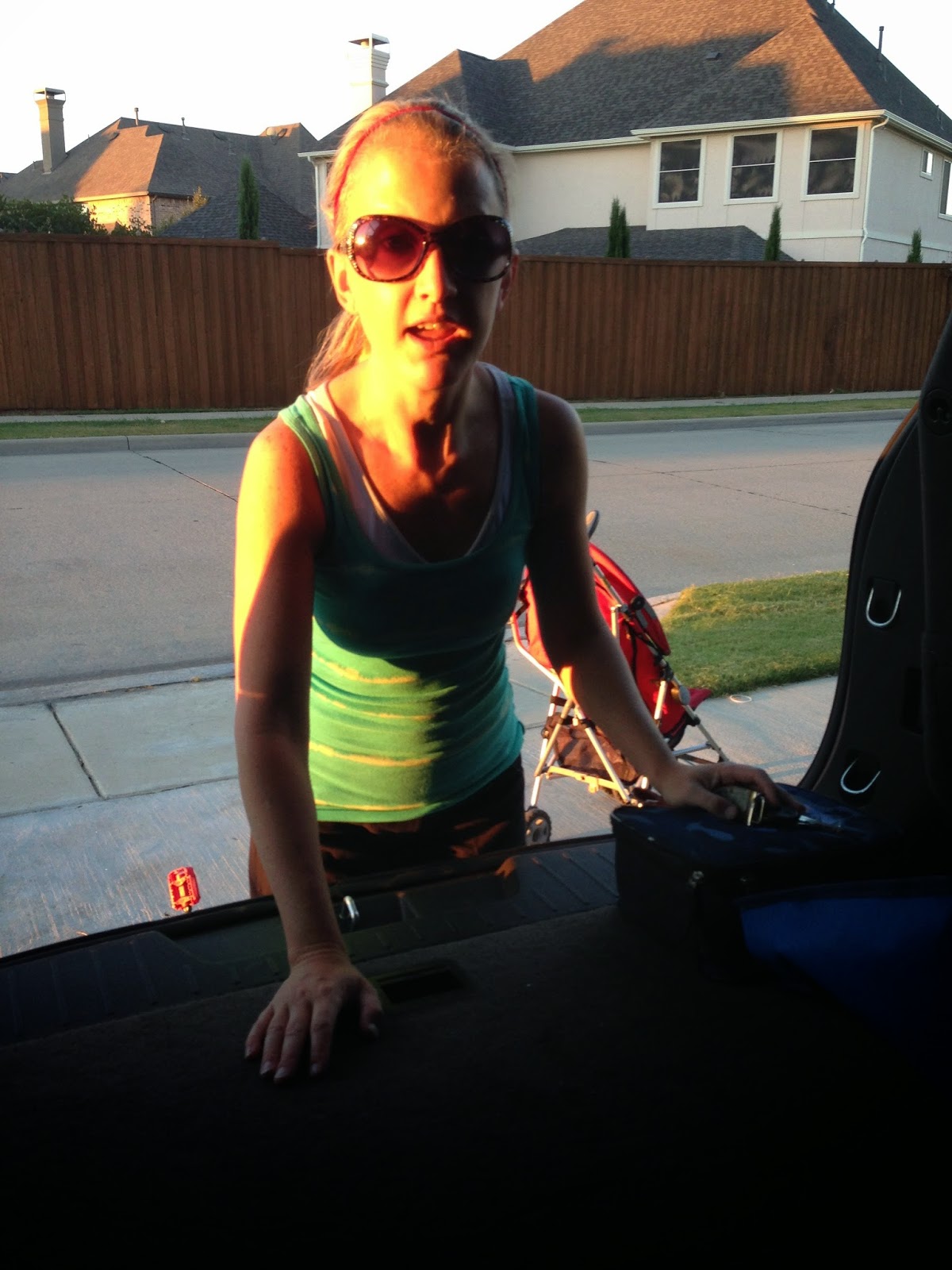 "I'm going to try one of those things…what do they call it when you take a picture of yourself? Oh, right. A selfie! Here I go! Well that didn't work. Pinterest fail!" 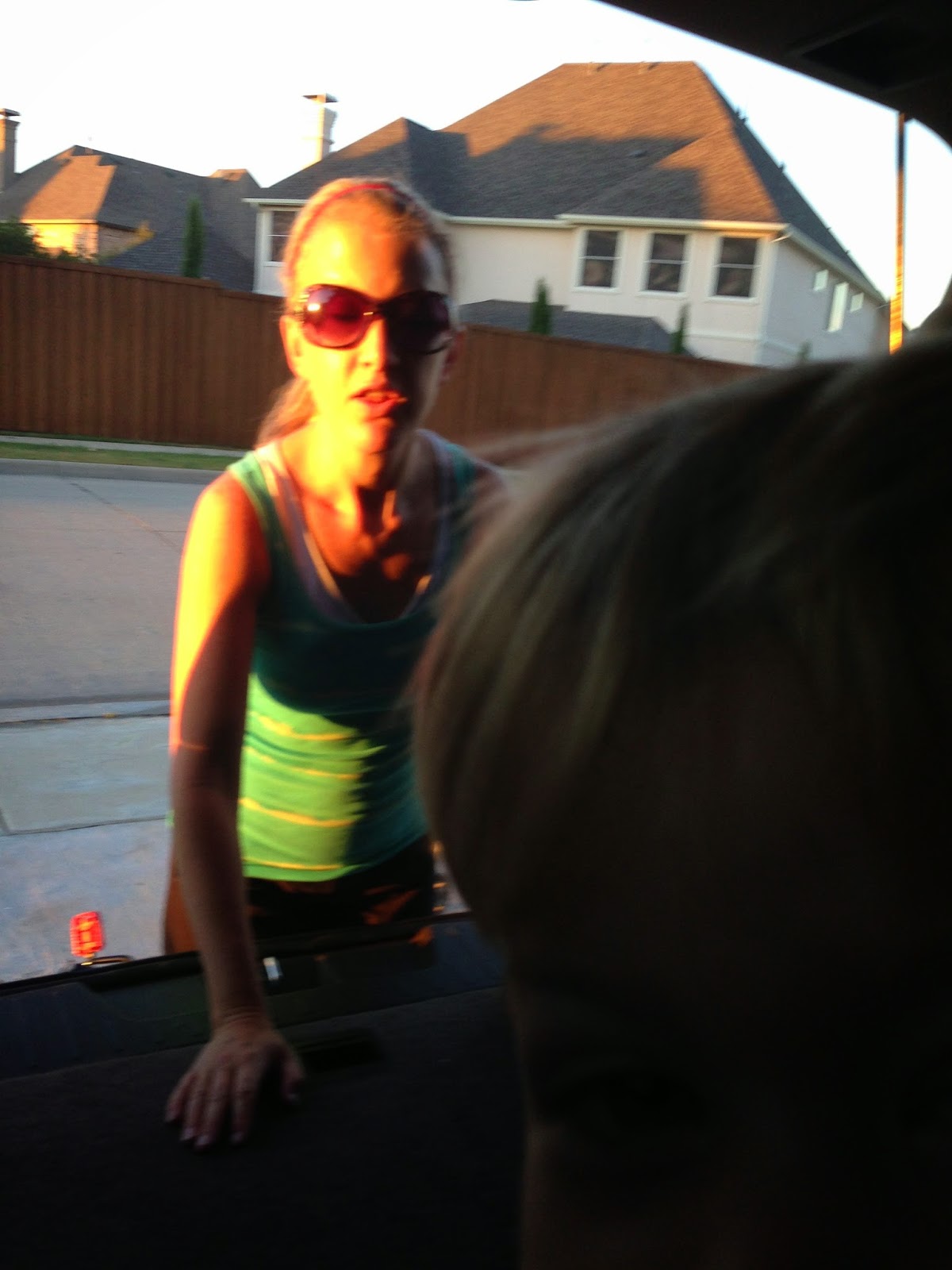 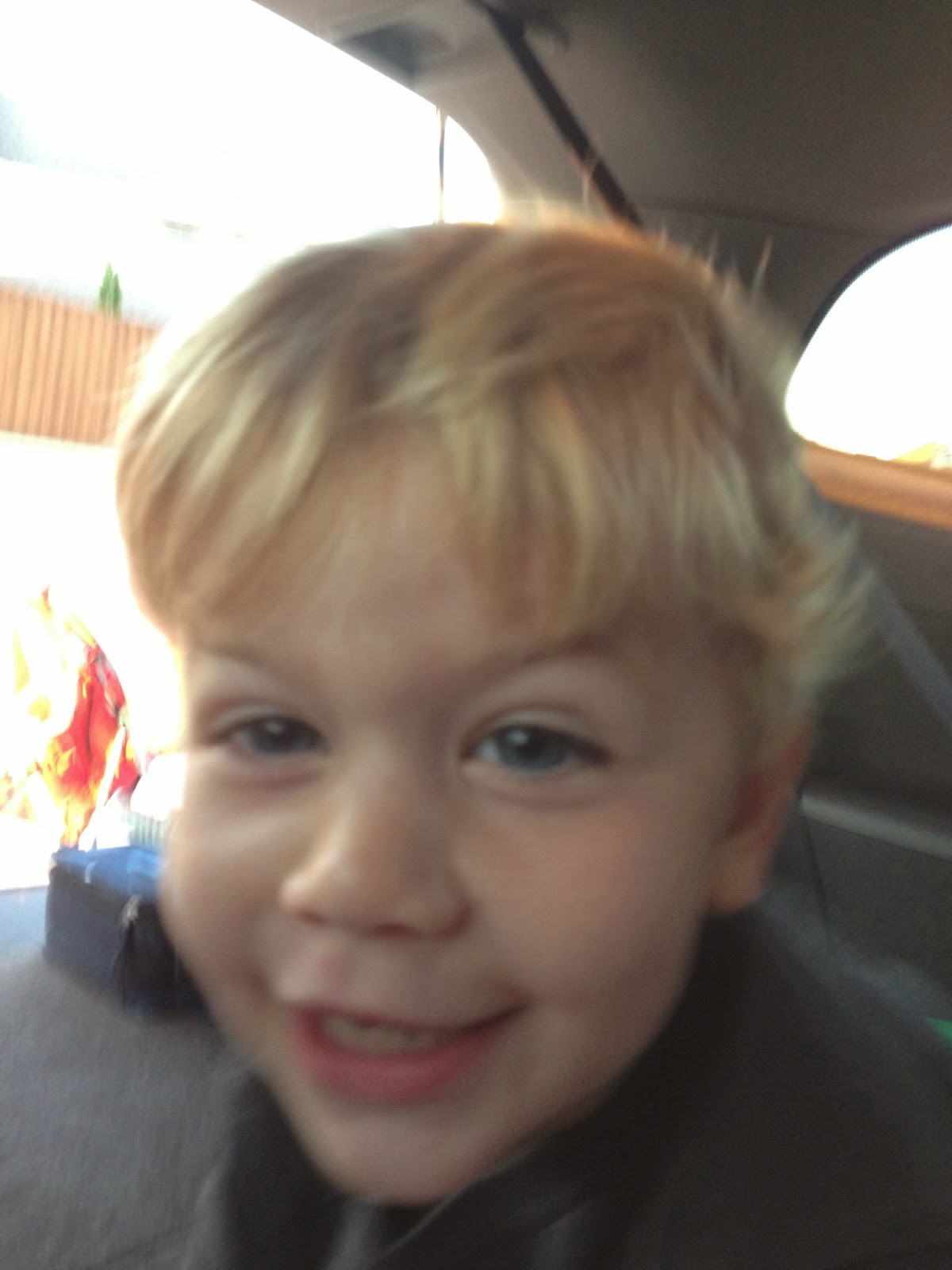 "Uh-oh. I think mommy might be mad. I'm not sure why. She's trying to take the phone away from me!  No way. I'm having too much fun. I'll just take more pictures of her!" 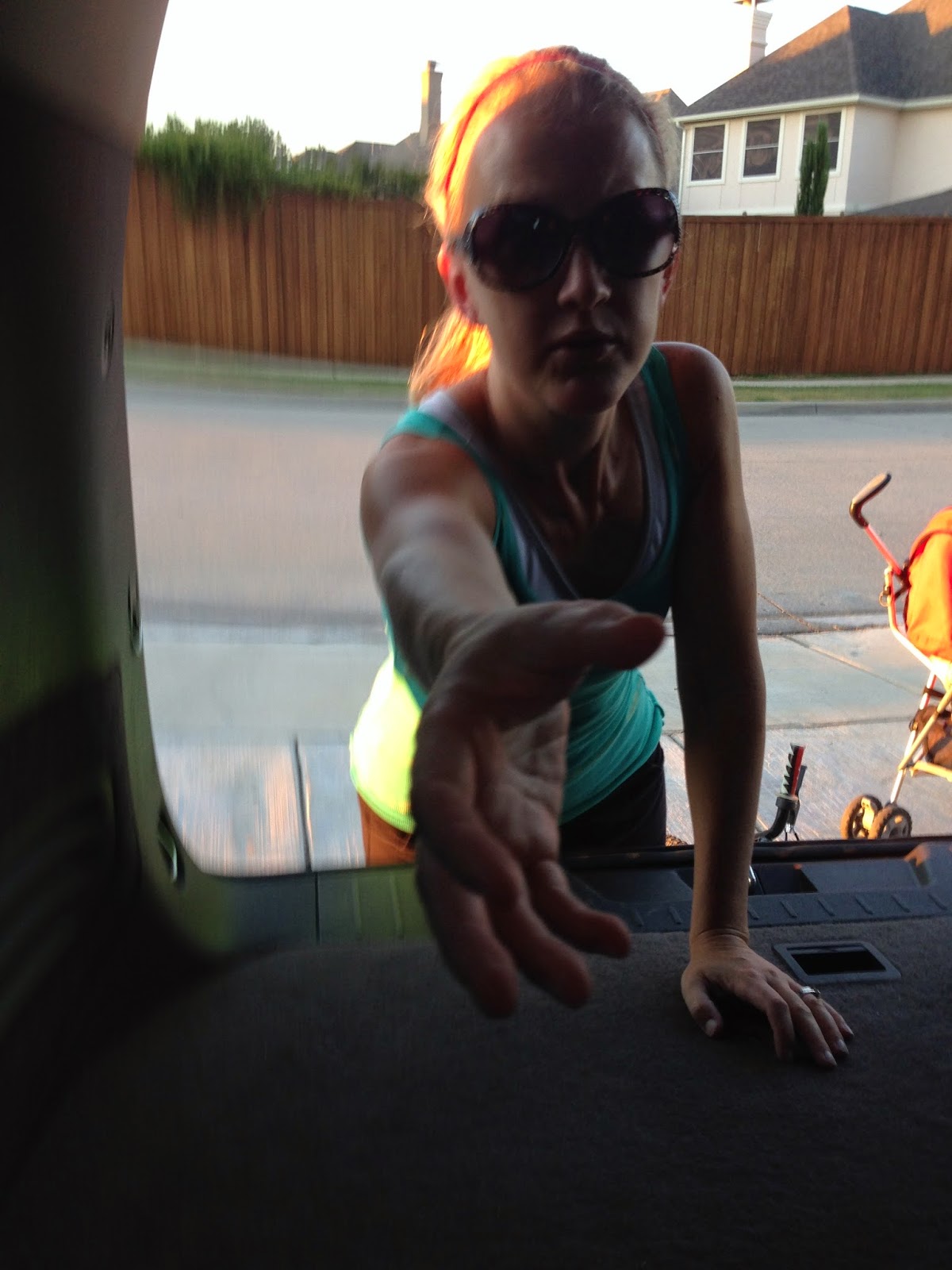 "There is steam blowing out of mommy's ears! I've got to get a shot of that and show my friends in preschool Frog's class!" 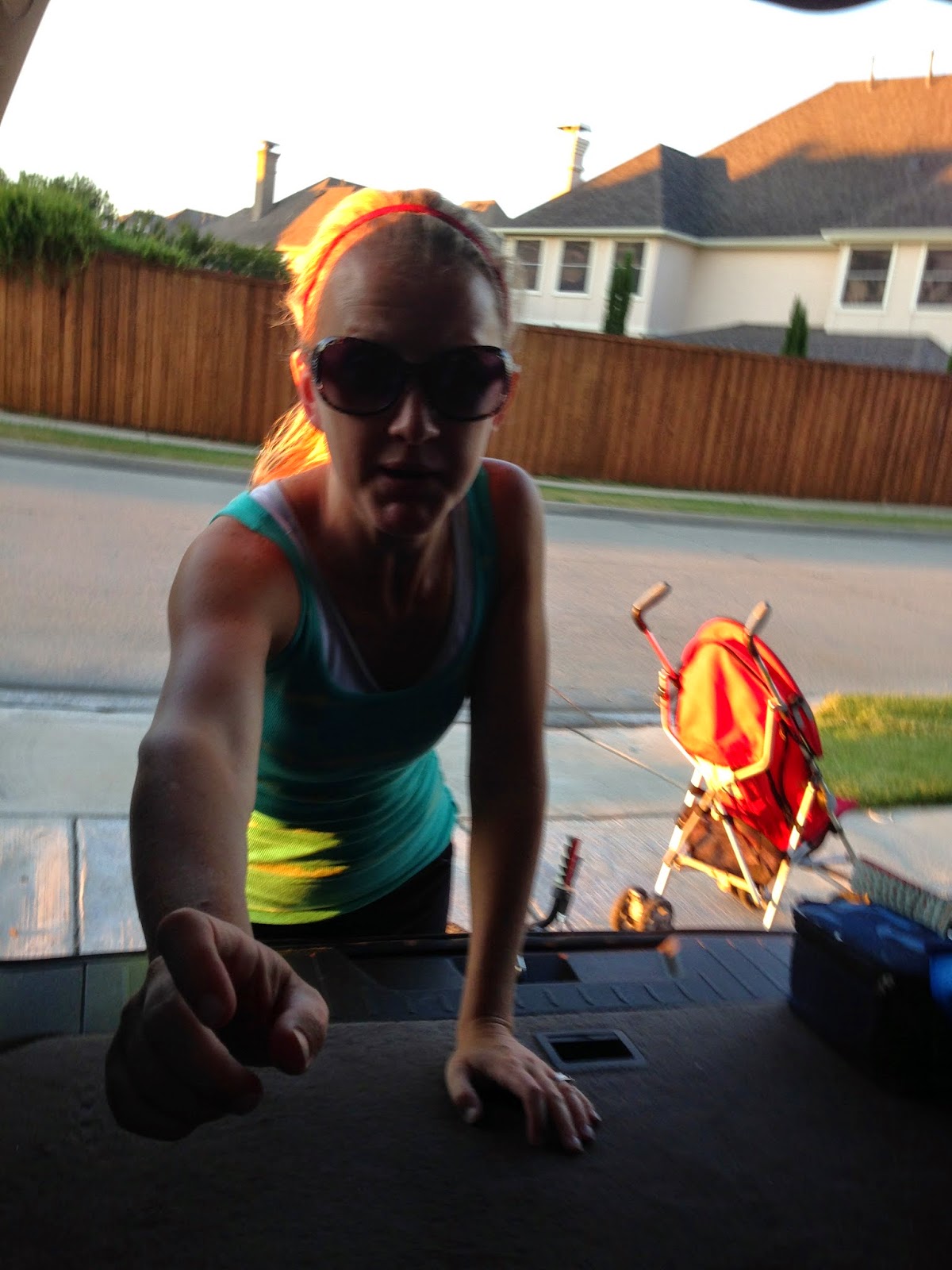 "Now she is threatening me. Says she'll take my shoo shoo. Whatever. I have three more! Gonna just keep snapping photos!" 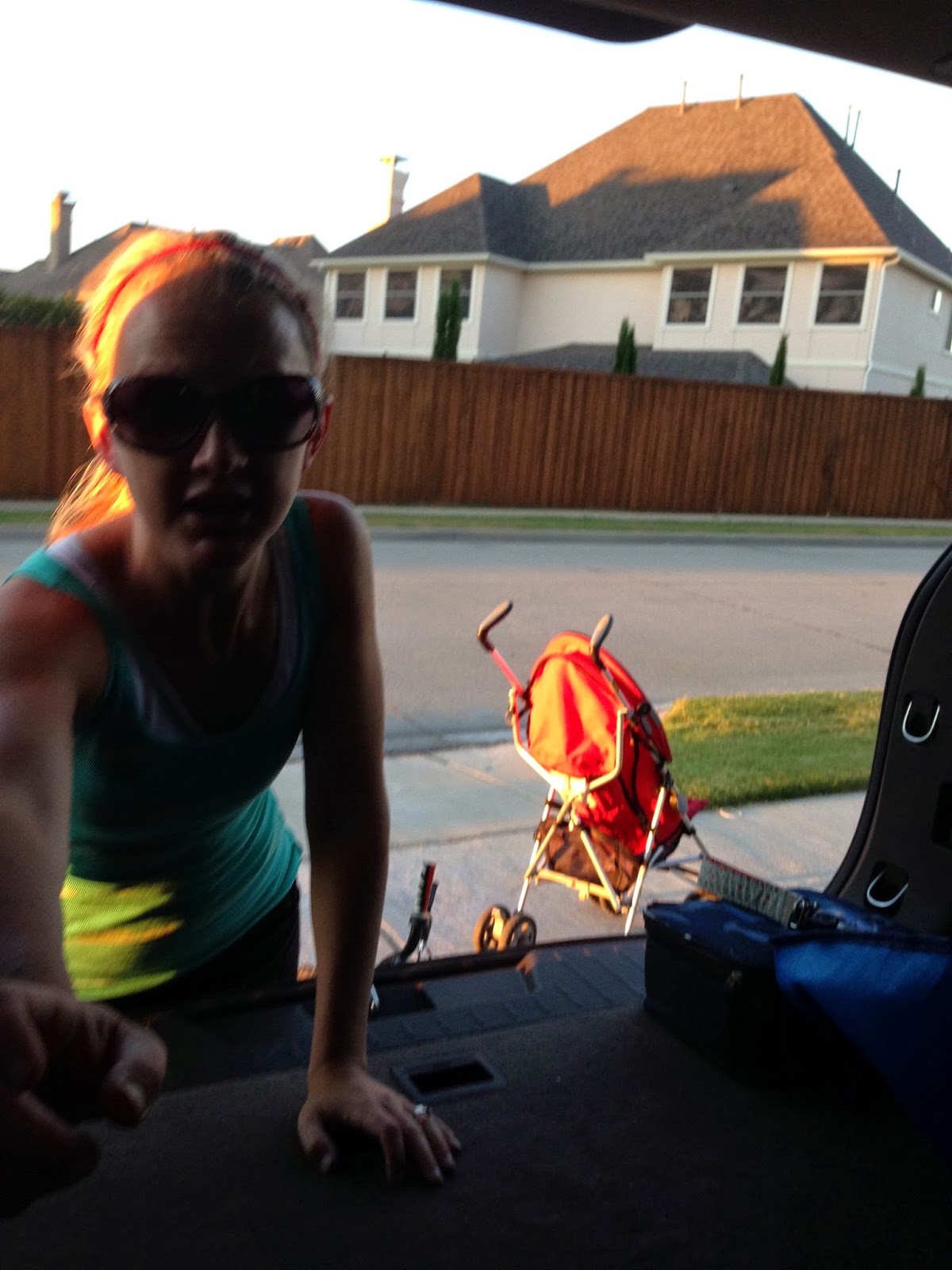 "I think mommy is going to cry. But she really should smile for the camera! That's what she always tells me to do!" 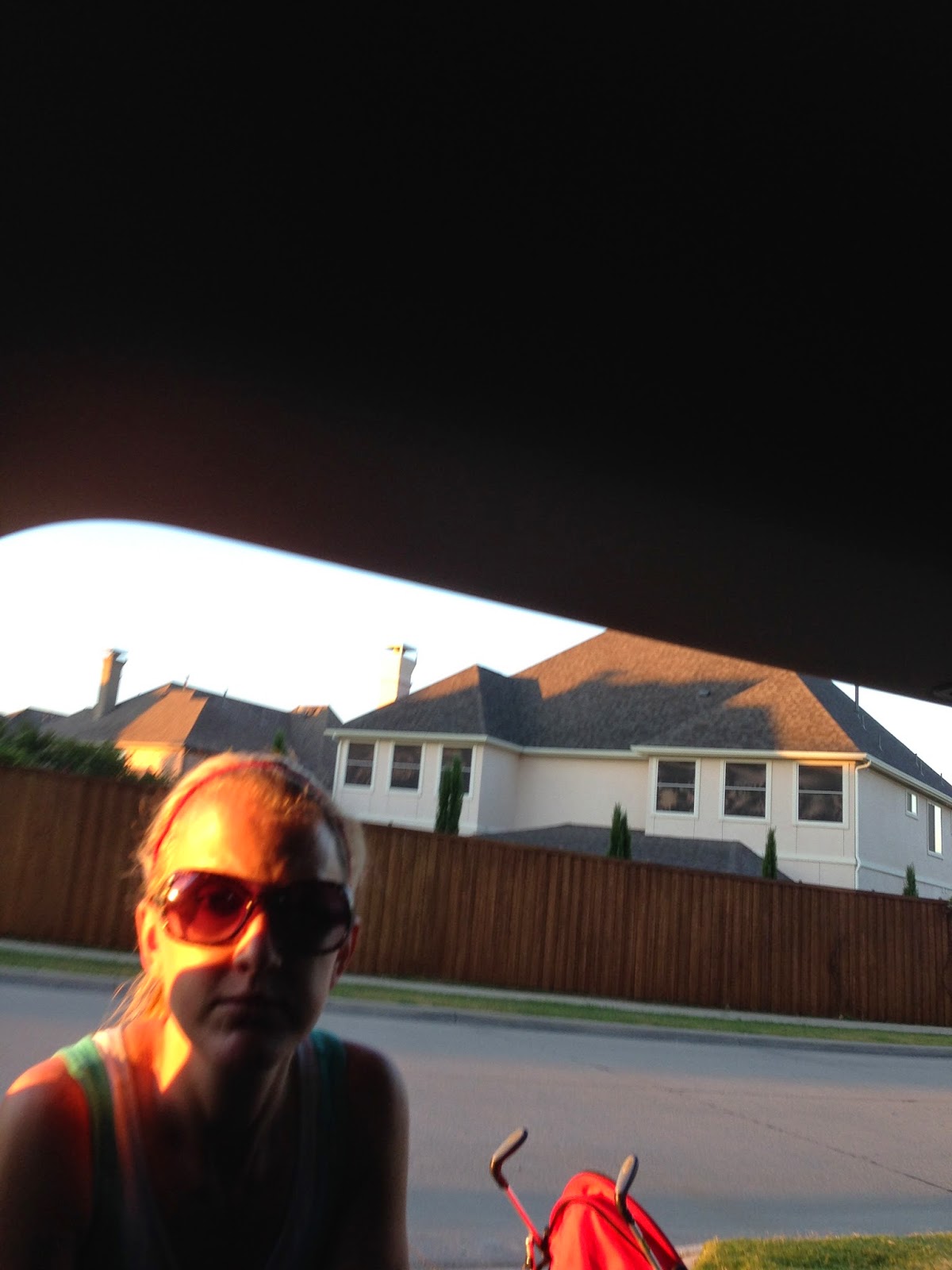 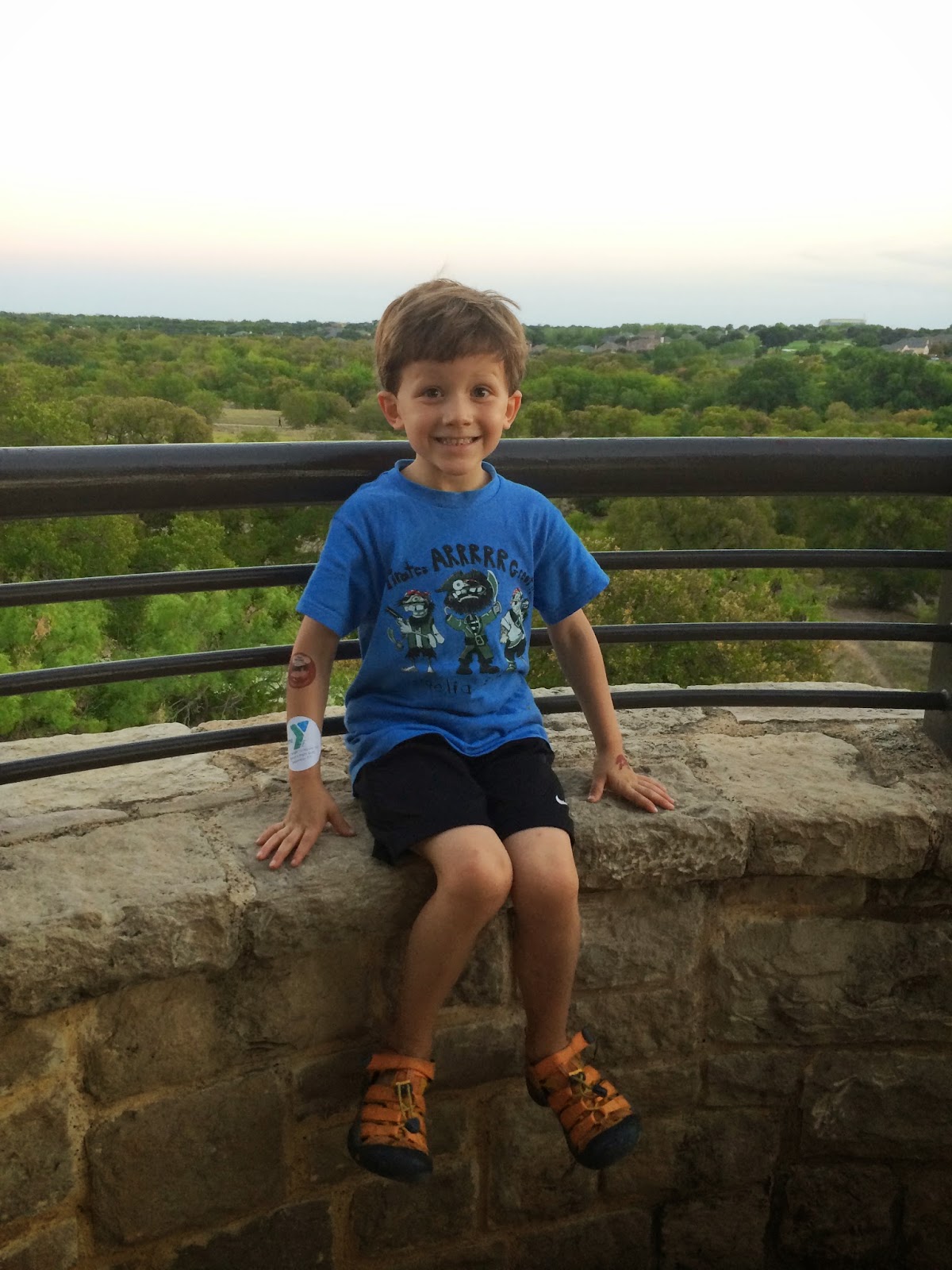 Leo is often disgruntled. He accuses us of punishing him unfairly, for "no reason at all." When he gets in these moods, he likes to express his frustration through art. Usually that means he writes "Mom" or "Dad" with an X over it. The other day he took it to another level and, while he was in time-out for one of these imaginary offenses, created a game.

I was the lucky one who got to play it. He hid post-it notes around the dining room for me to find. Each note represented either his hatred for me or his love for me.

The first one I found was slightly disturbing, I think because of the red ink. It was the one you see below with a stick figure of me, the word "mom" with an X over it and an arrow pointing to said stick figure. Again, the red ink makes it look a little bloody and ups the creepy factor. An example of a love note is the one with the heart and mom. The one with all of our names and exclamation points is also a positive one. The one with all the boxes is a bad one, but I'm not really sure why. 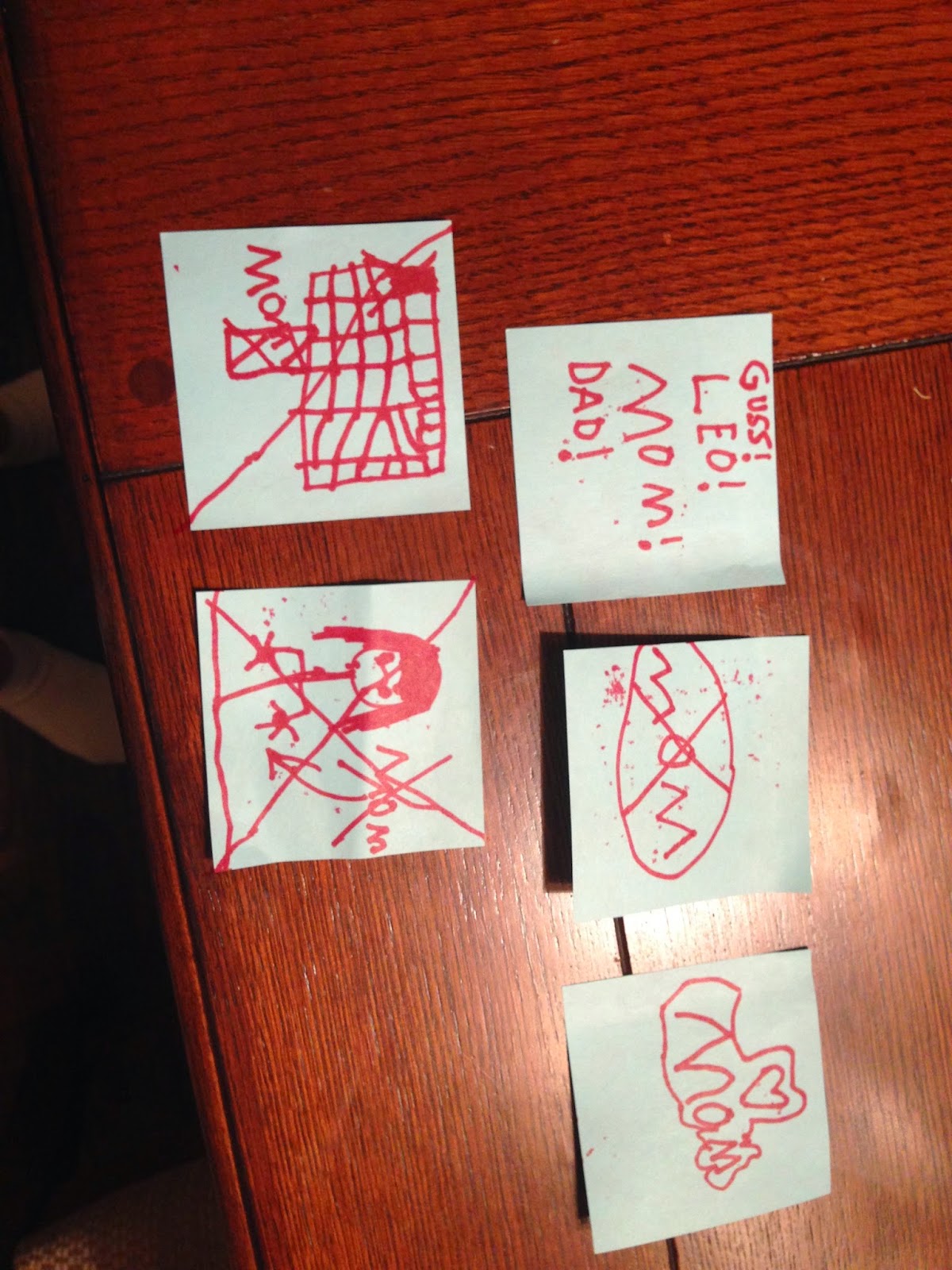 When Leo is not making up crazy games for me to play, he enjoys riding off into the sunset. 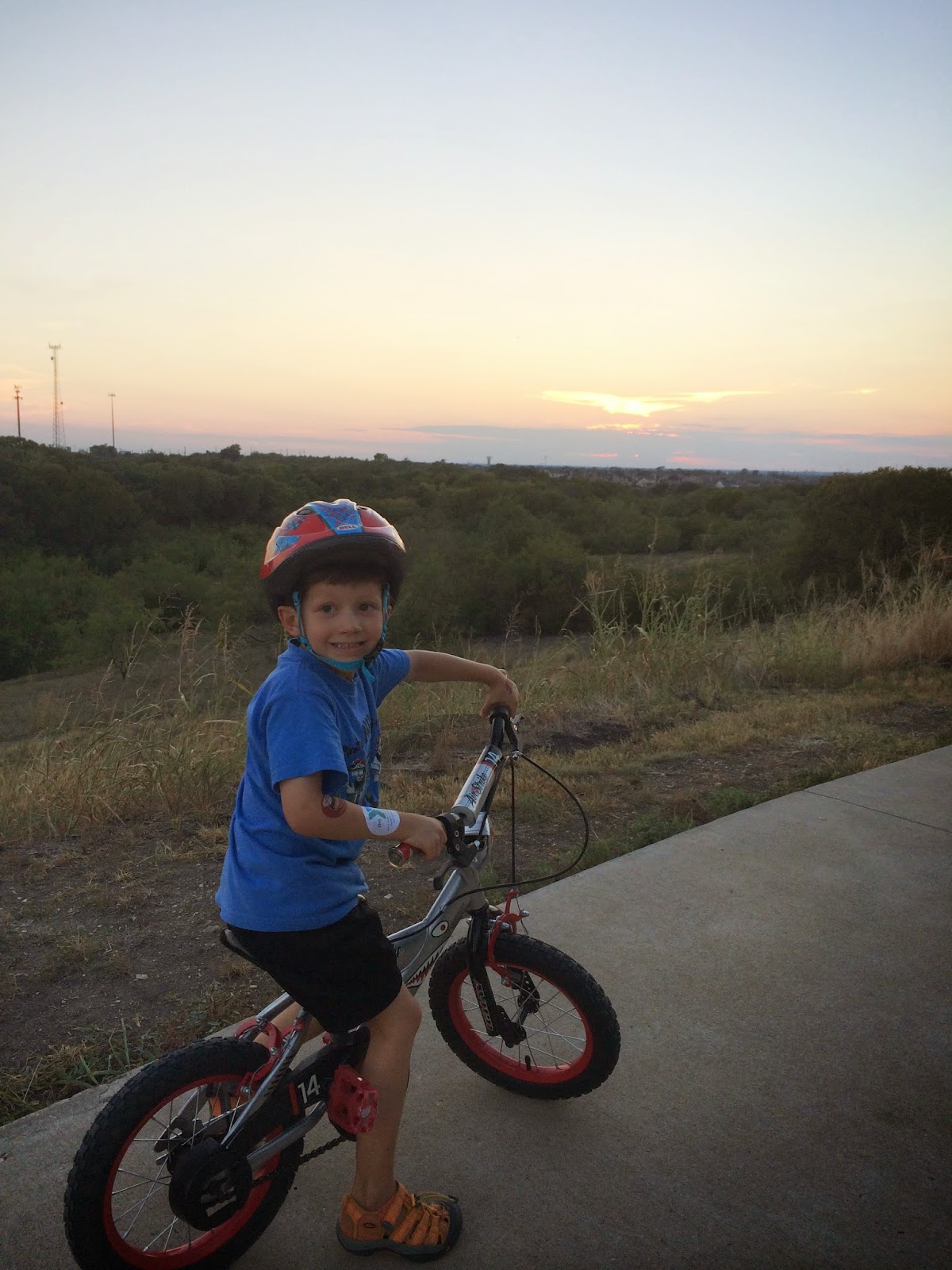 It's hard to get a picture of Gus smiling. But even though he's not always grinning ear to ear, he is usually doing something goofy. And that makes for good pictures too.  Here are some of Gus' latest antics, packed in with his First Day of School pics (some of which are goofy as well).

Doing some naked rockin' out: 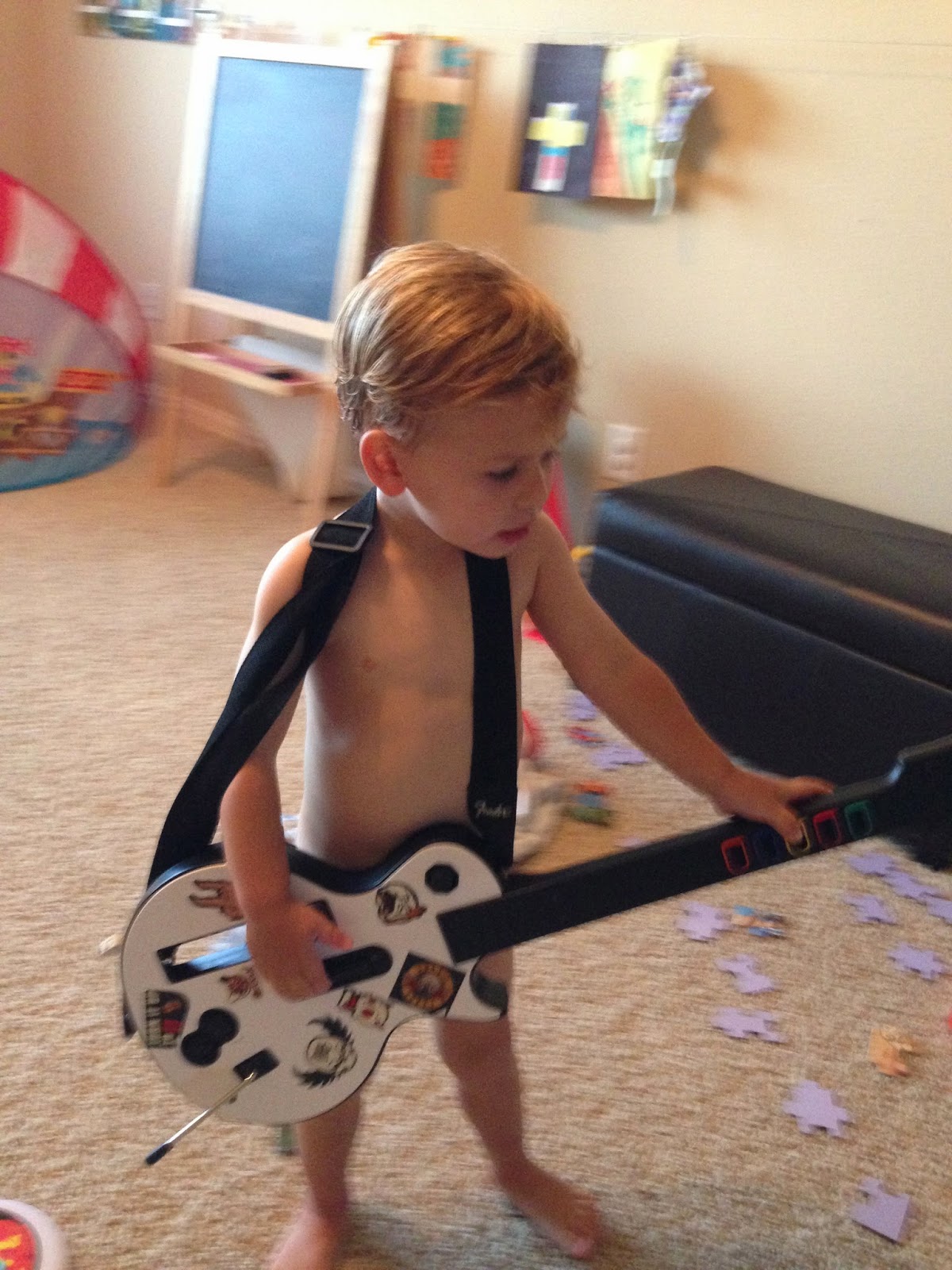 "Ah, nothing like playing the guitar in my birthday suit!" 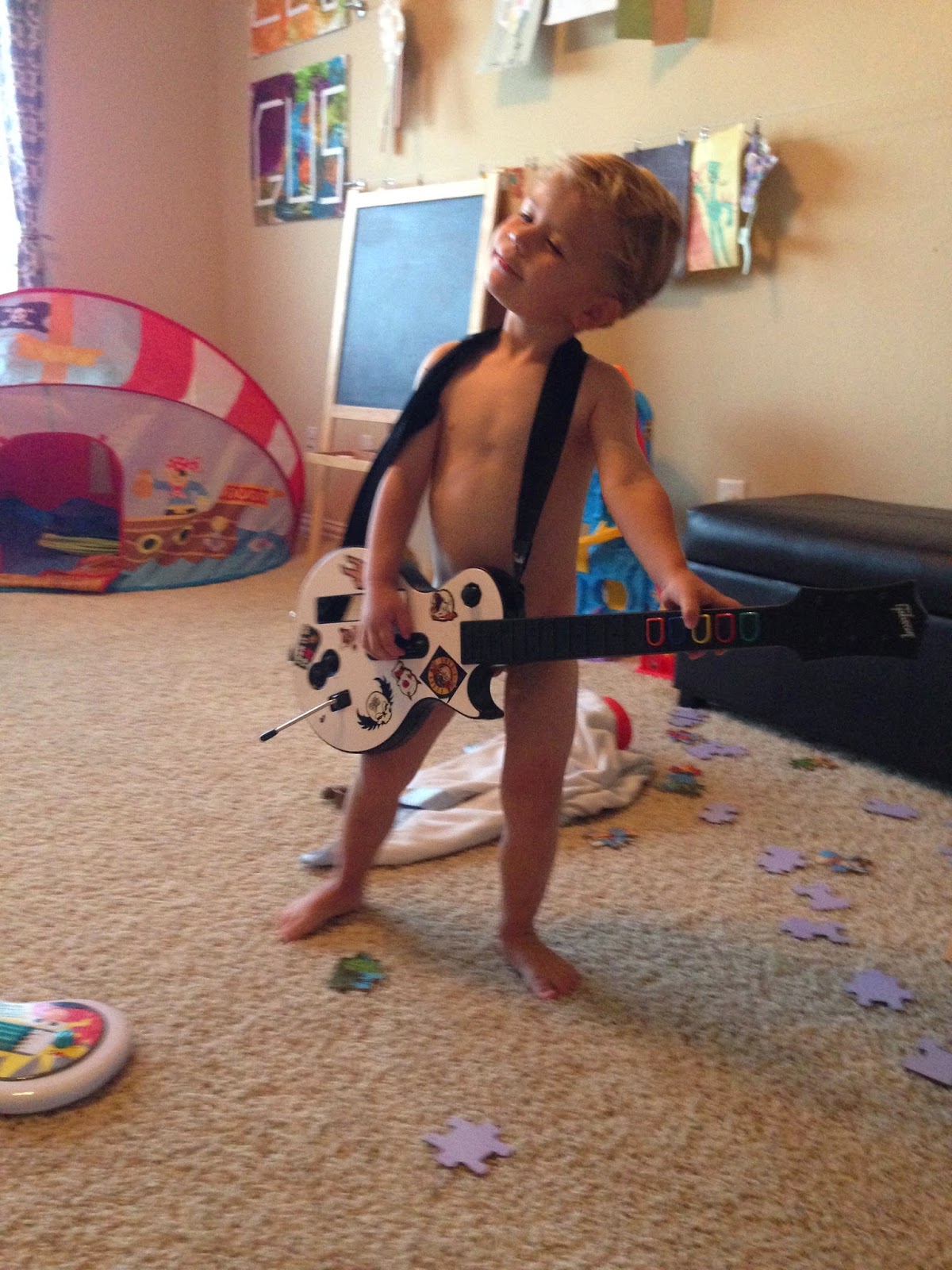 After he jumped off the side of the pool and aimed for the corner--ouch! 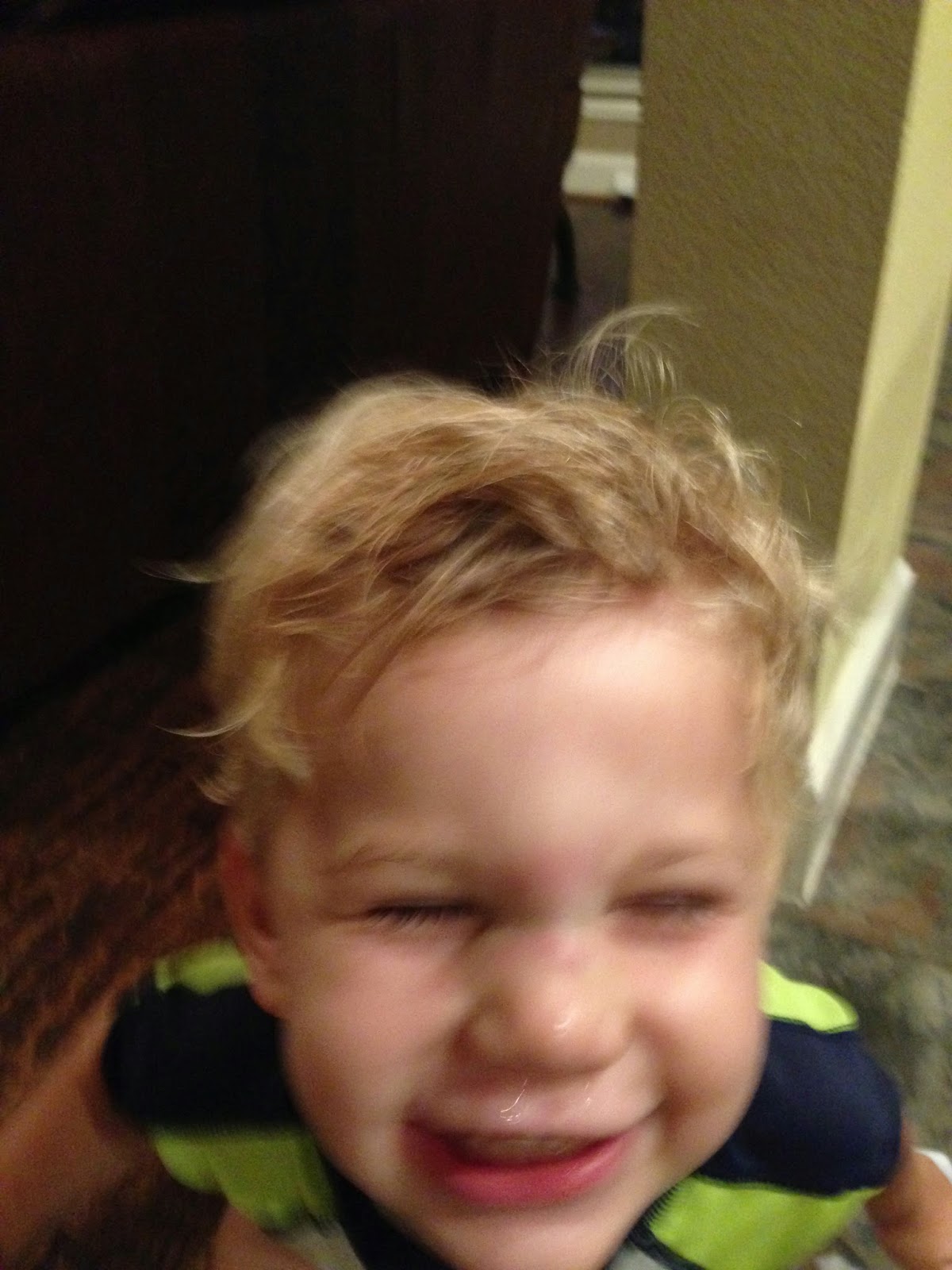 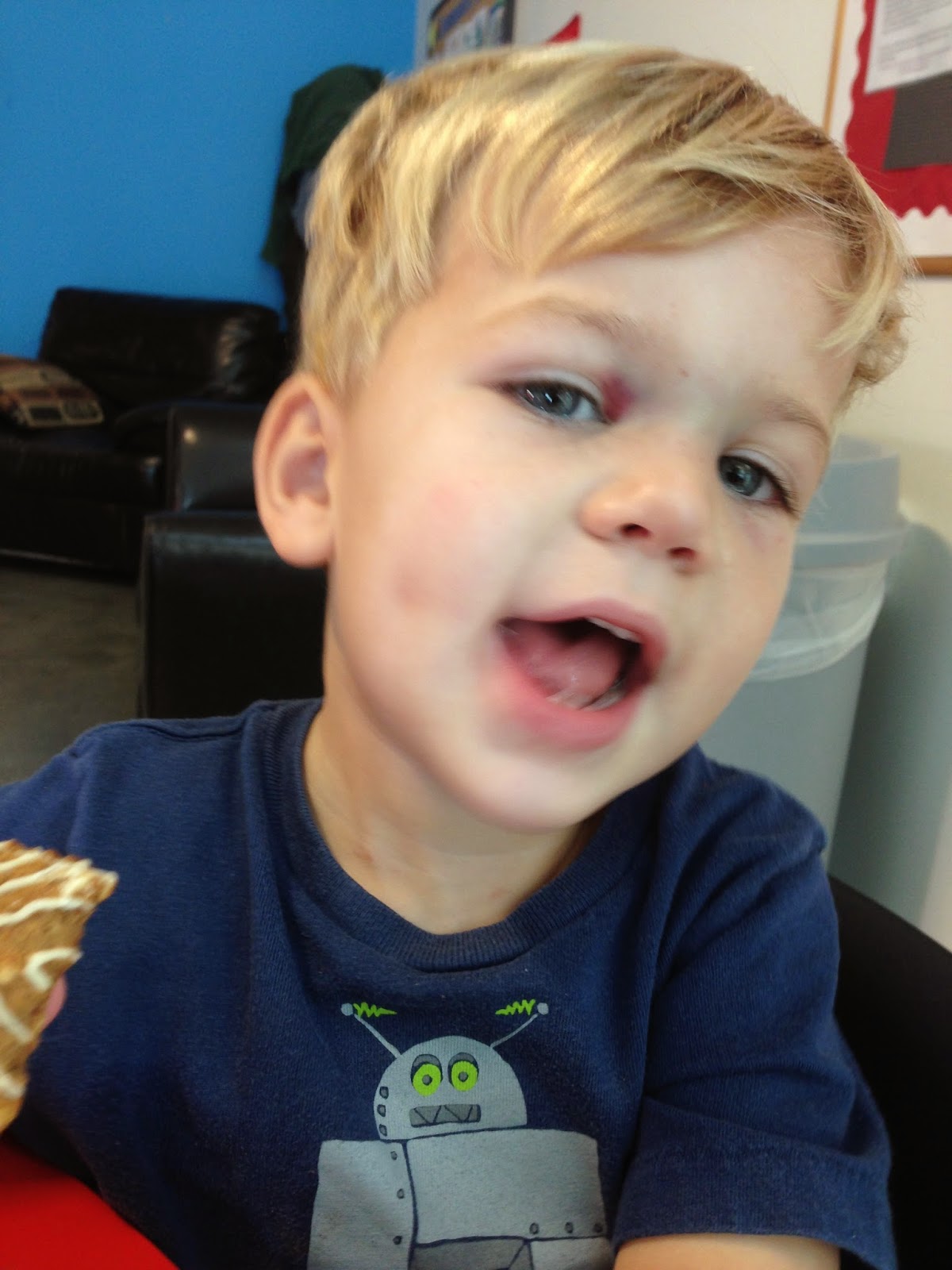 Getting every single toy out of the cabinet and basket: 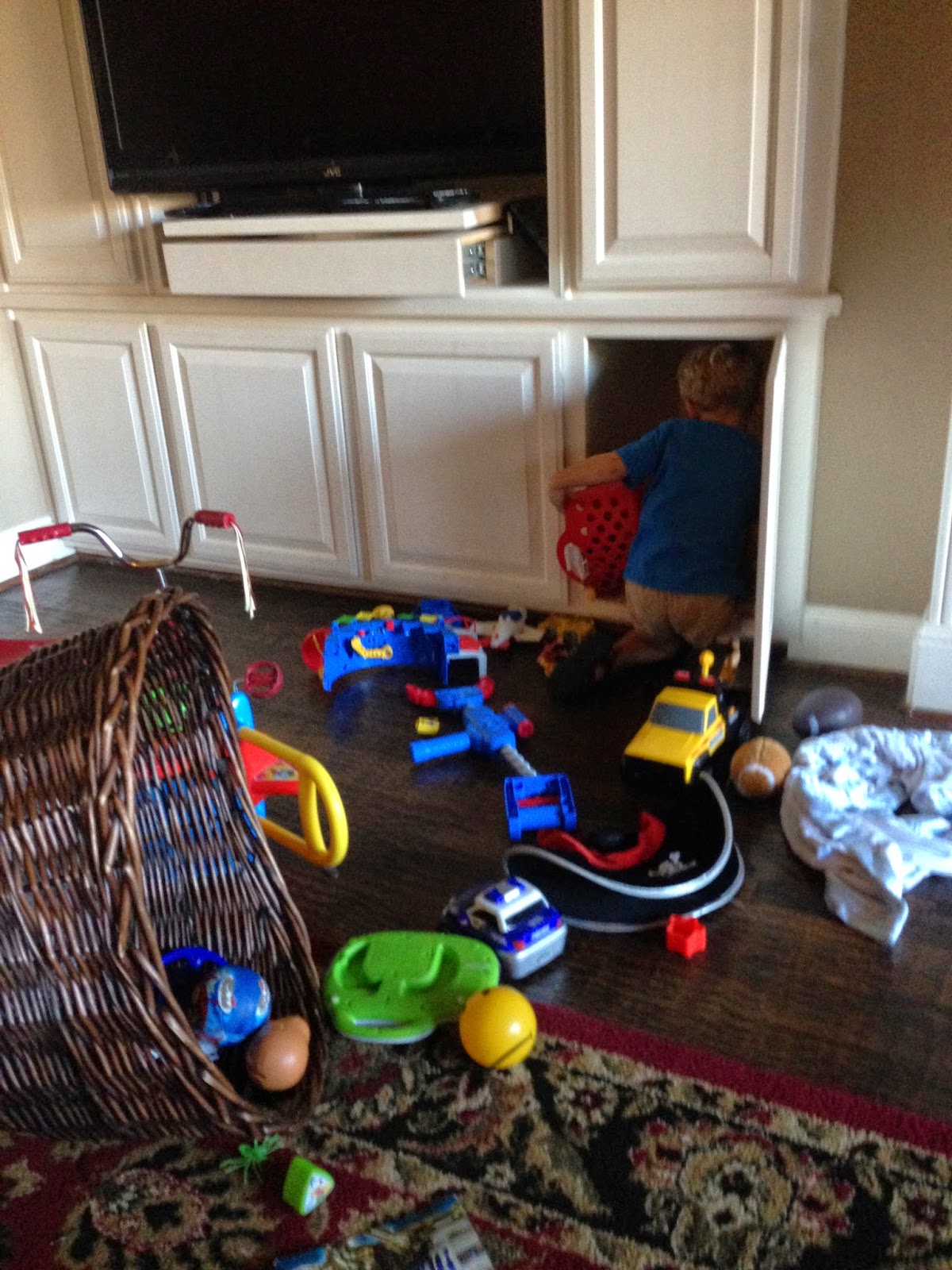 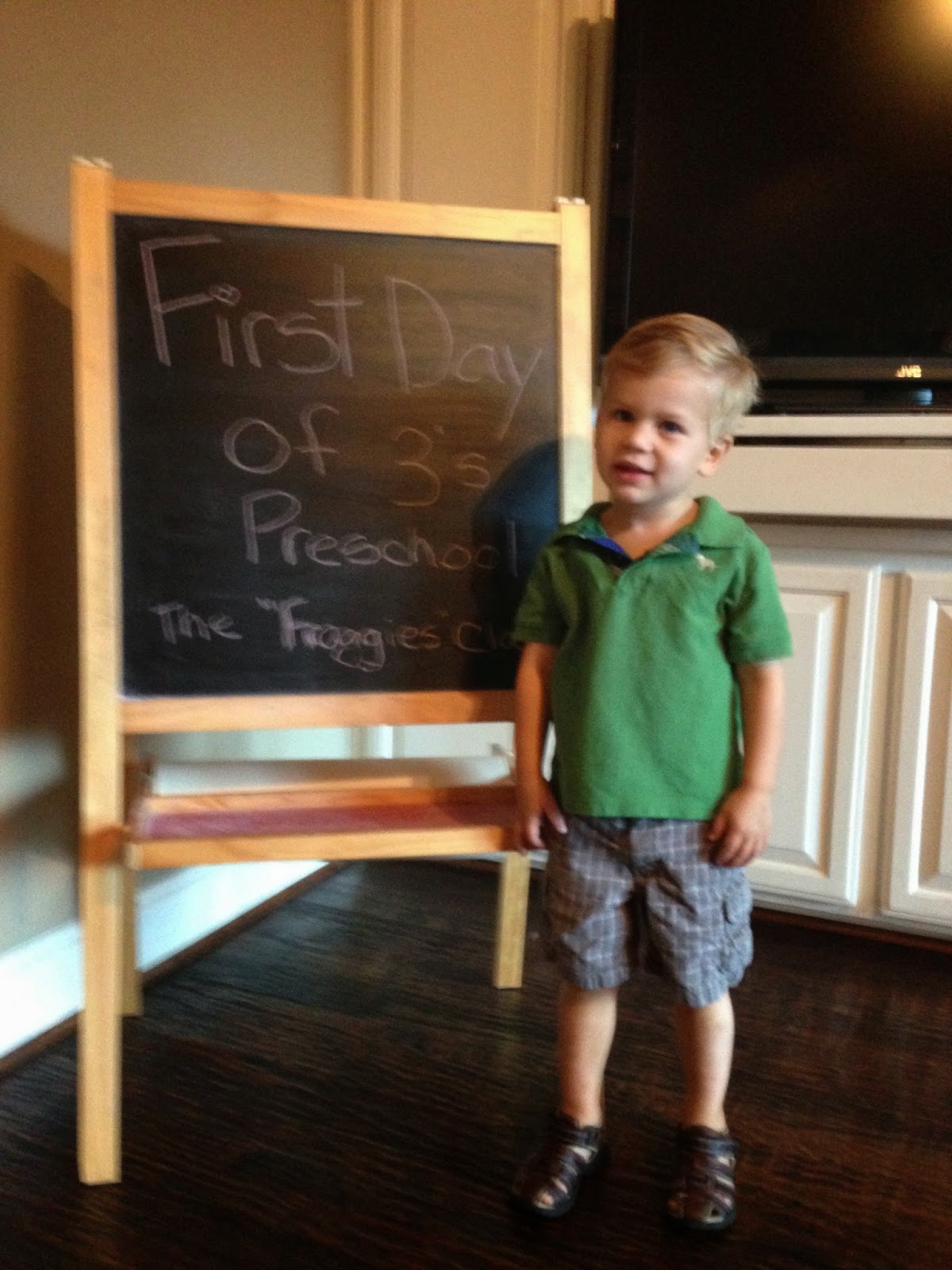 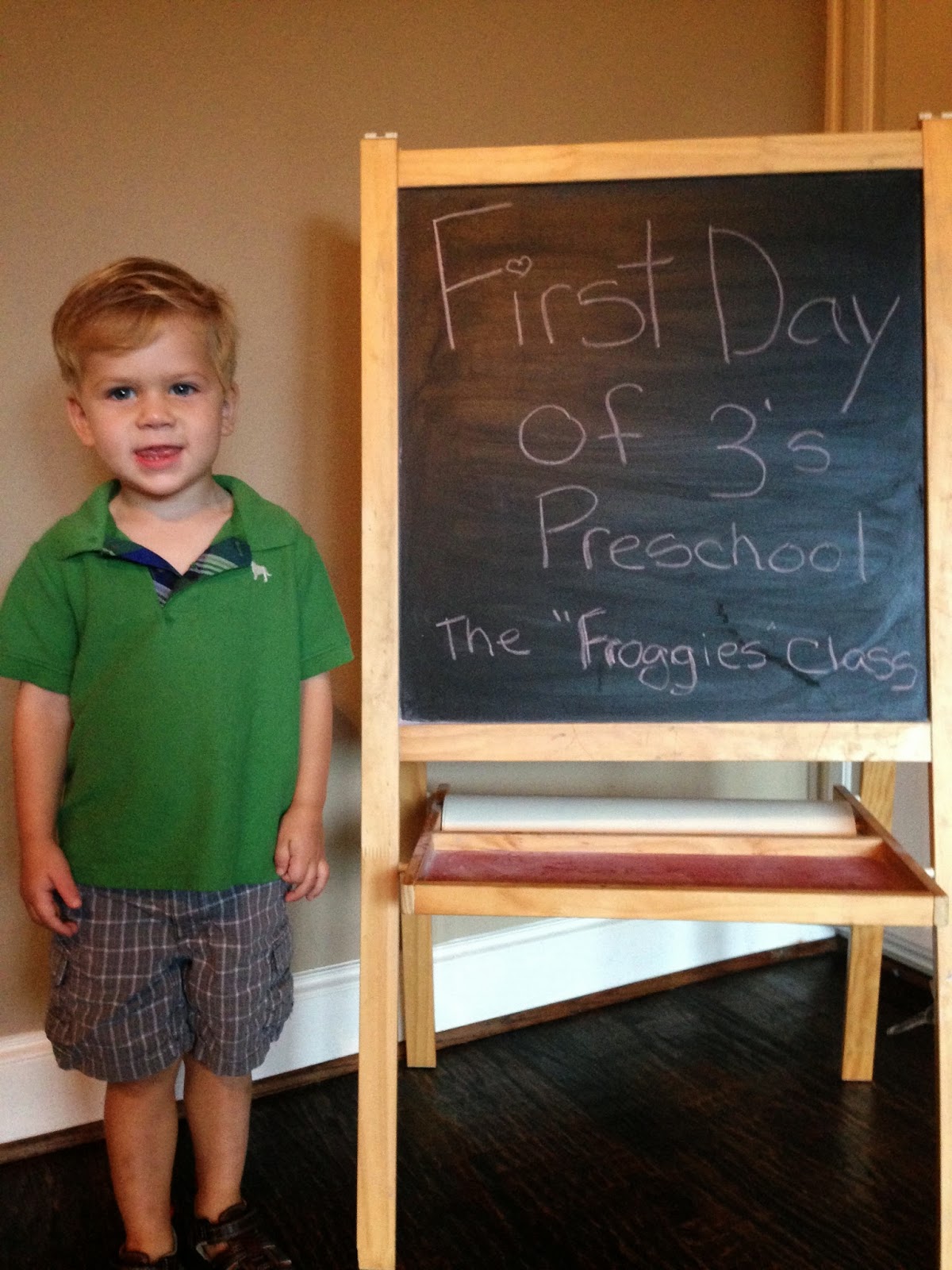 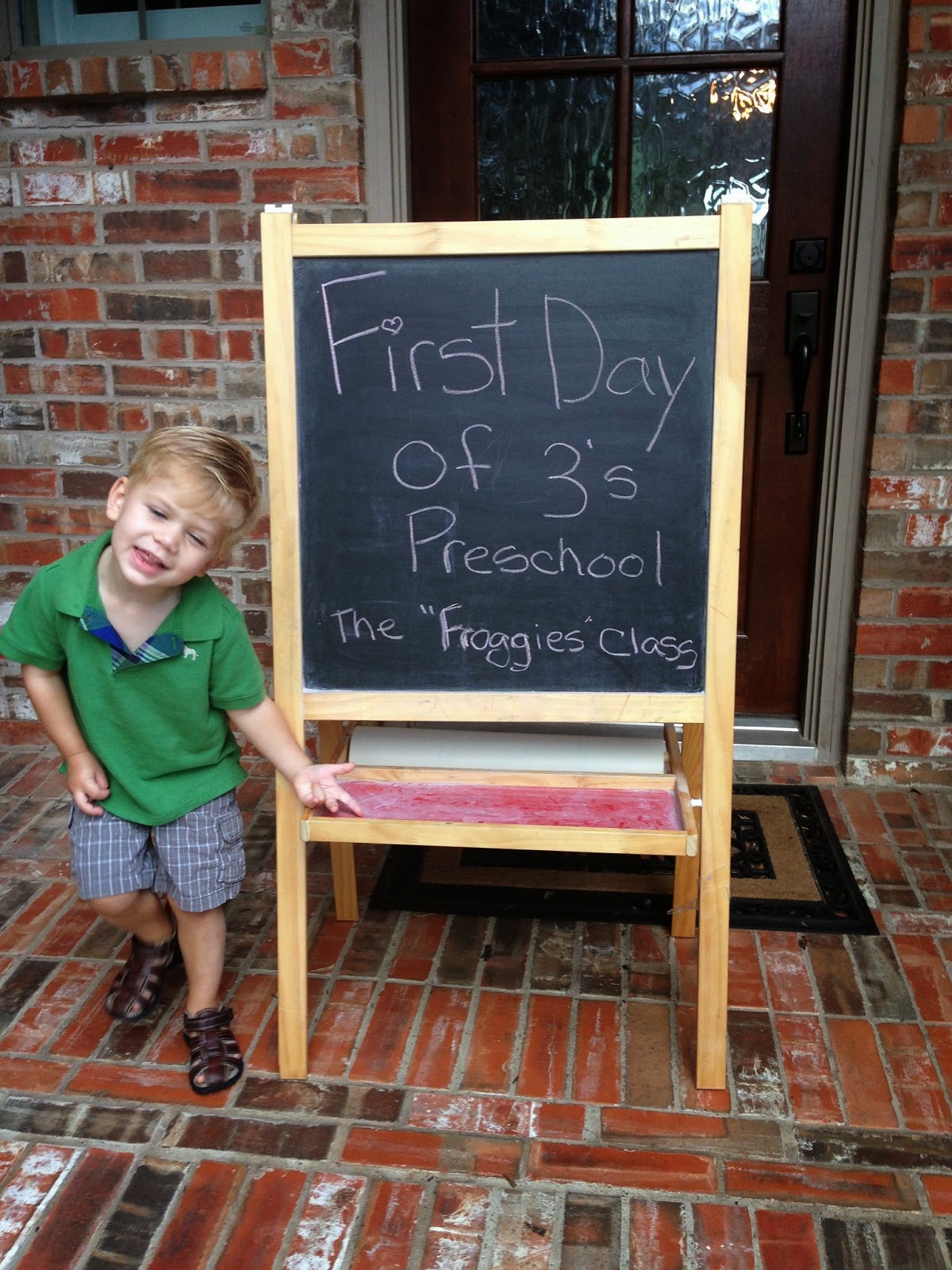 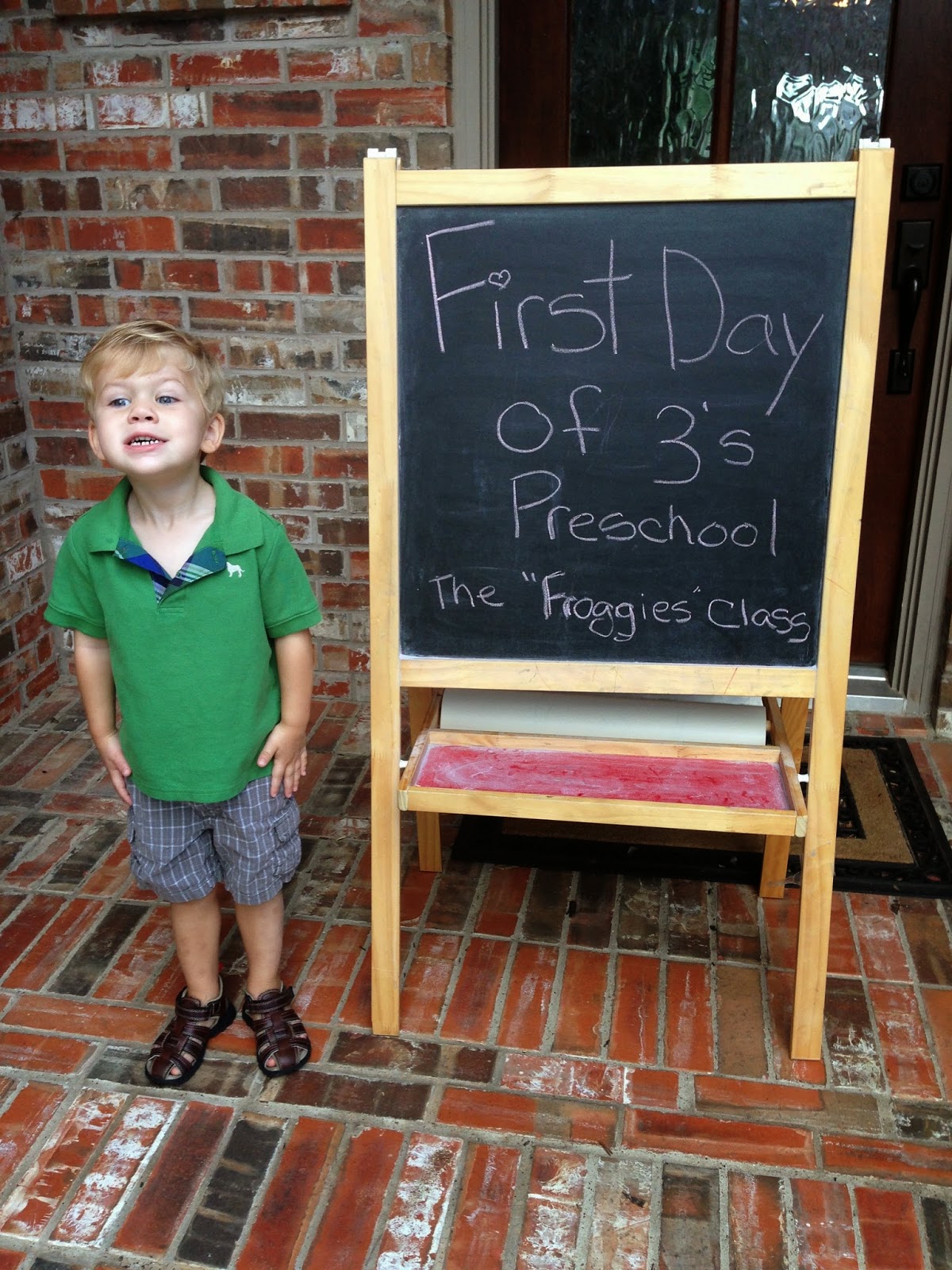 He's happy about wearing his froggy shirt but upset about something else…I assume it involves that comically large pen behind him. 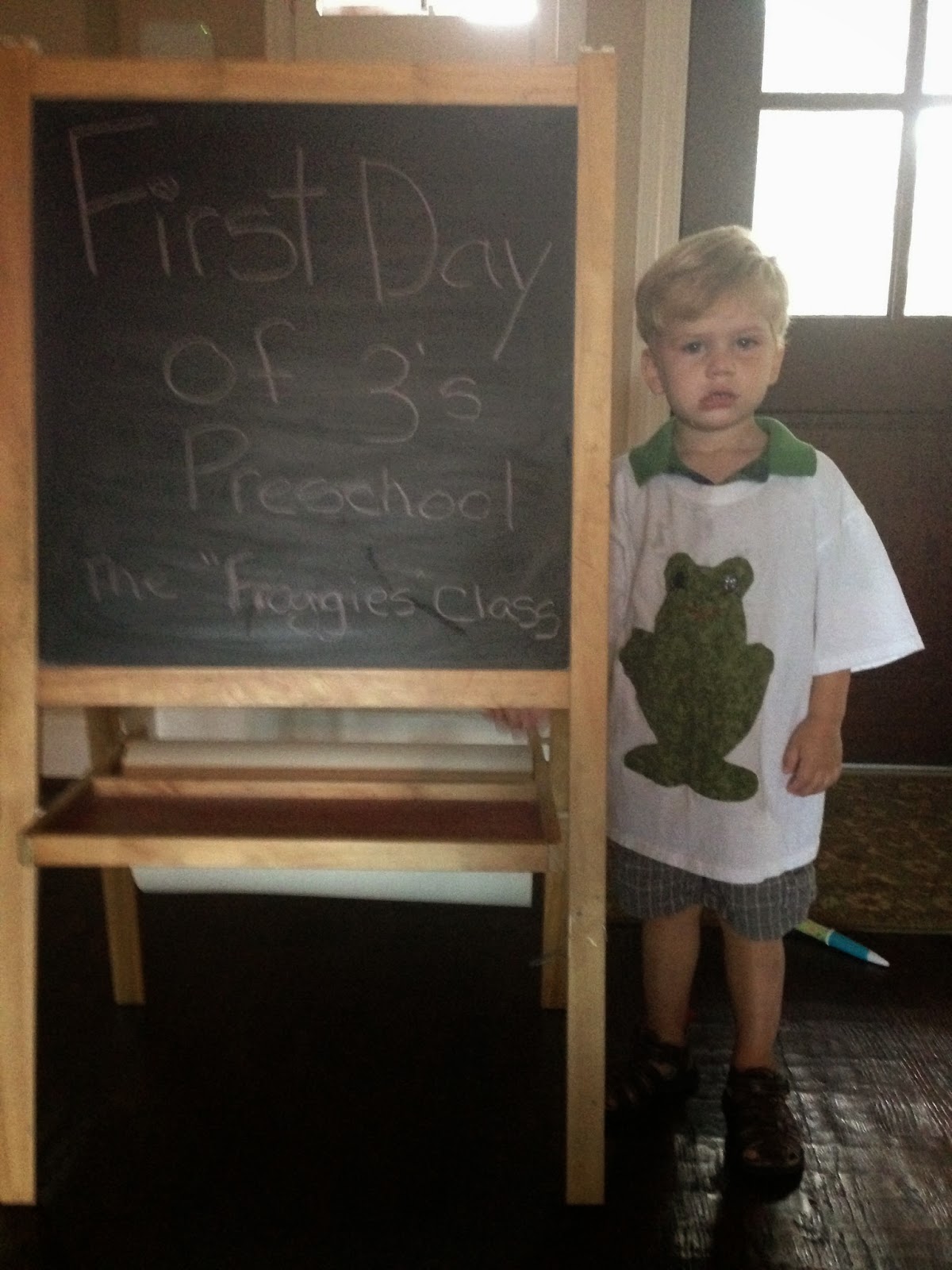 He insisted on carrying everything--totally different from Leo who prefers me to be his pack mule. 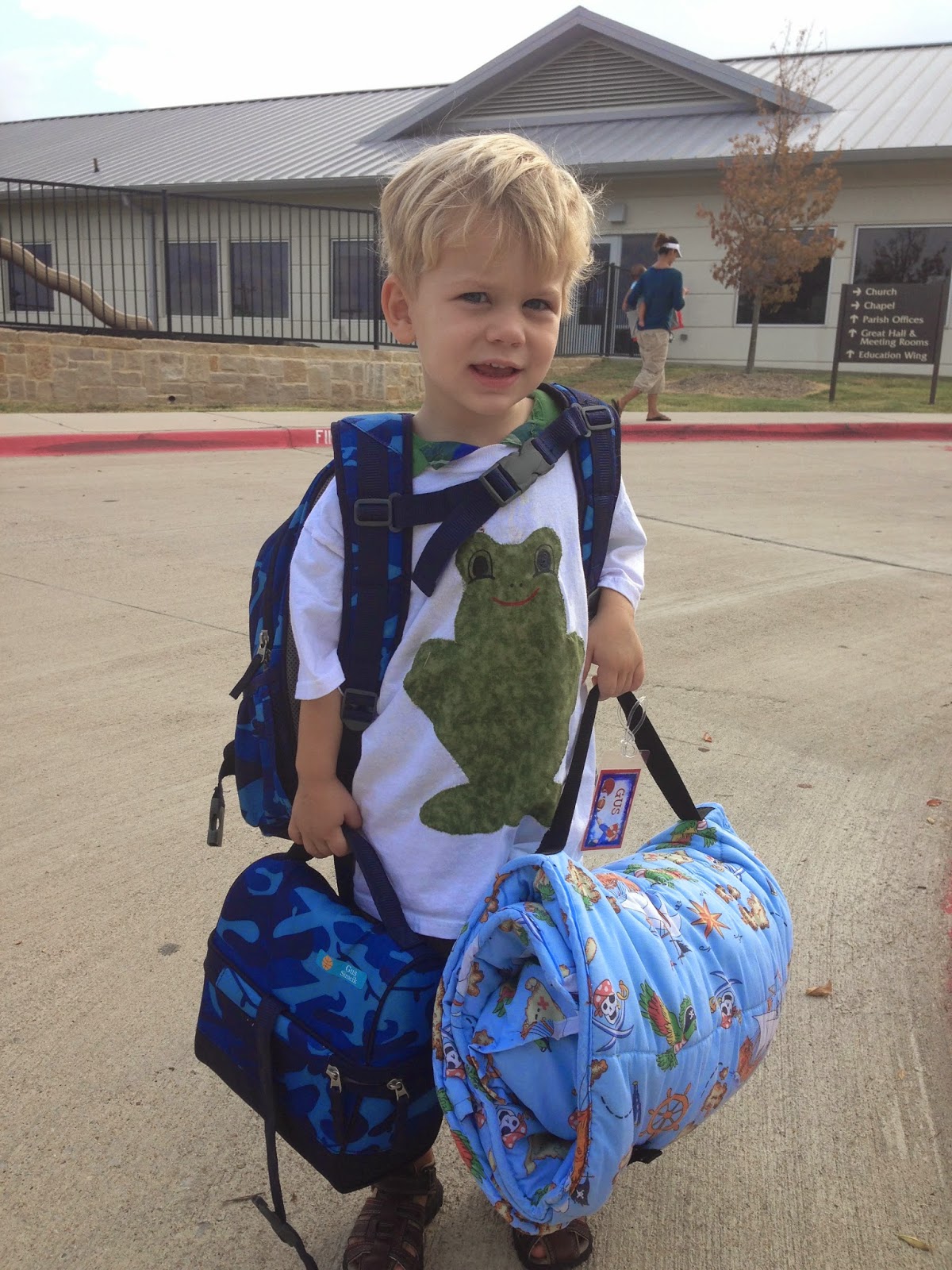 With his classmate, Hannah Kate. Her brother Ben was a Dove and a Wolf with Leo. Gus used to call her "Hannah Cake." 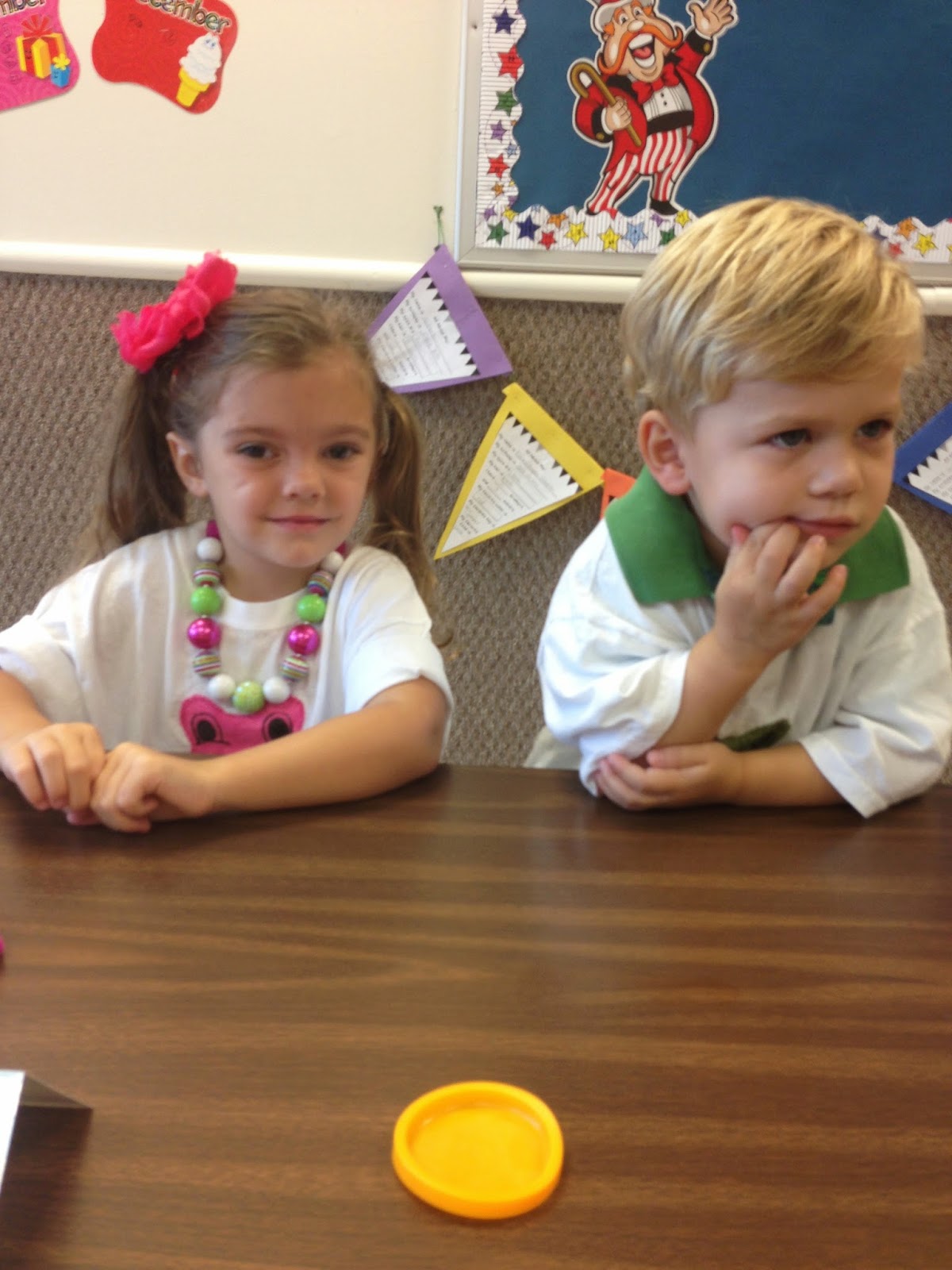 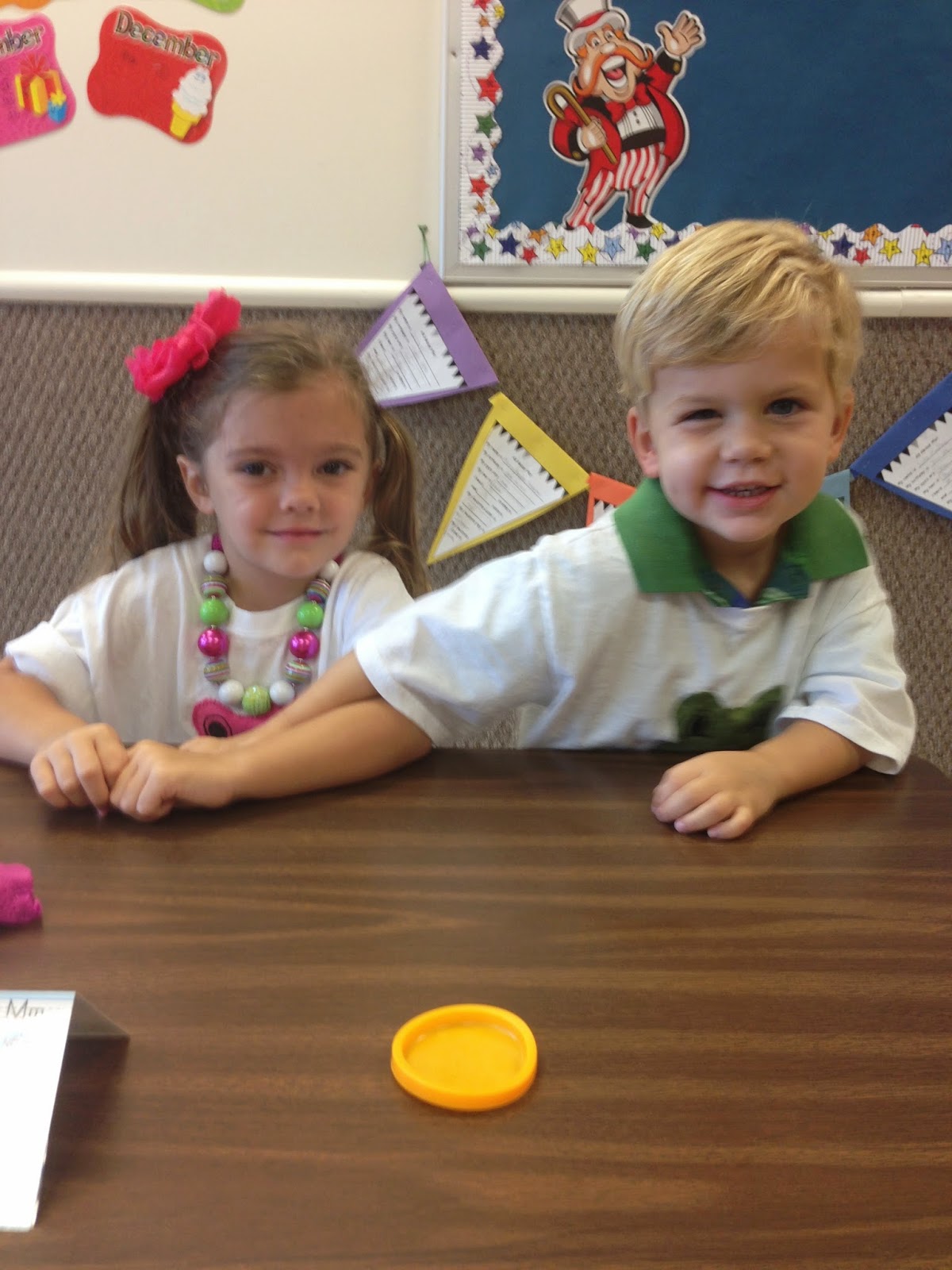 Gus and Leo both loved having our neighbors' dog, Charlie, stay with us for a few days. Gus called him, "Charlie the Dog," so as not to be confused with "Charlie the cousin." But sometimes he called him "Paloma." 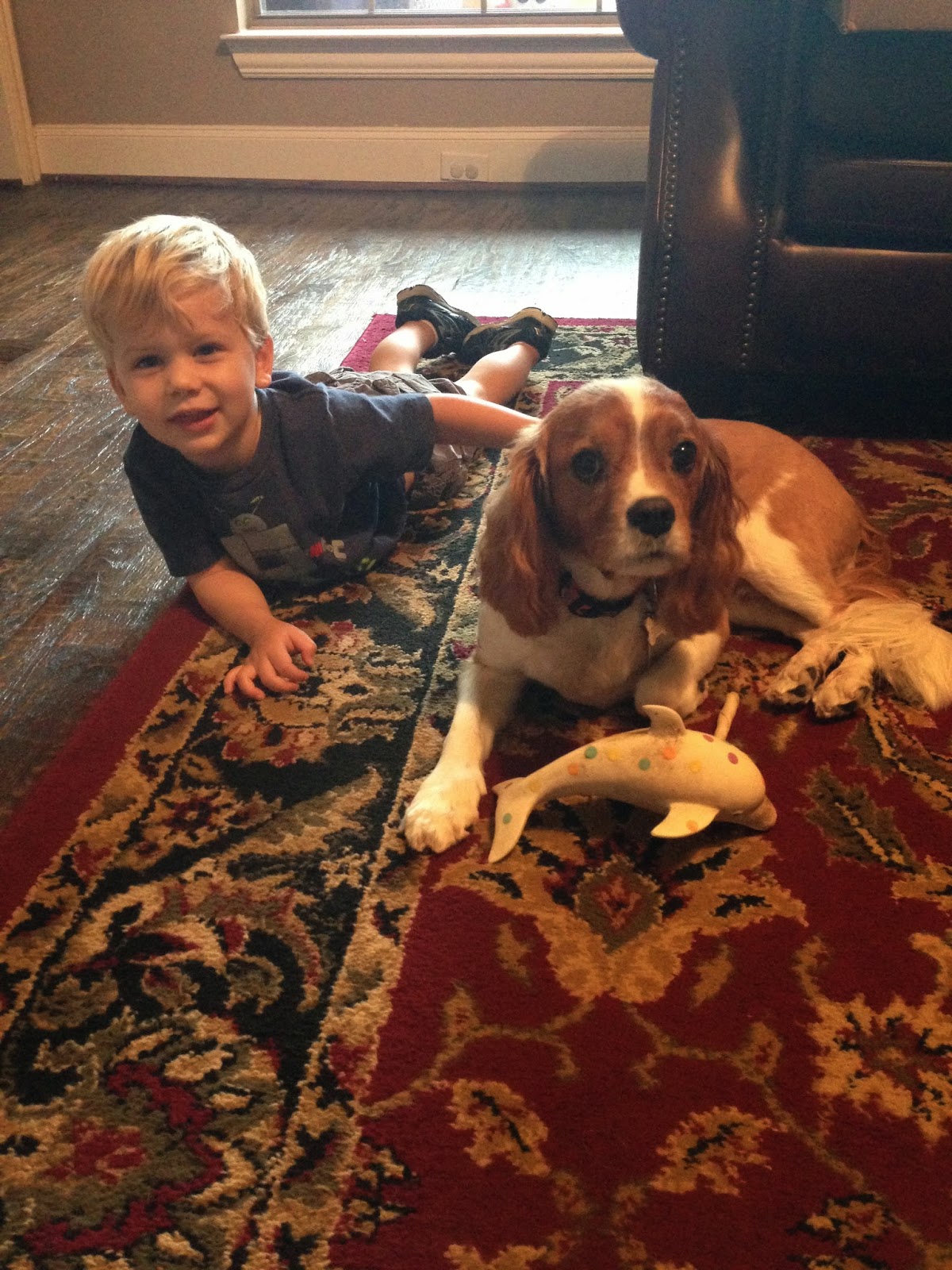 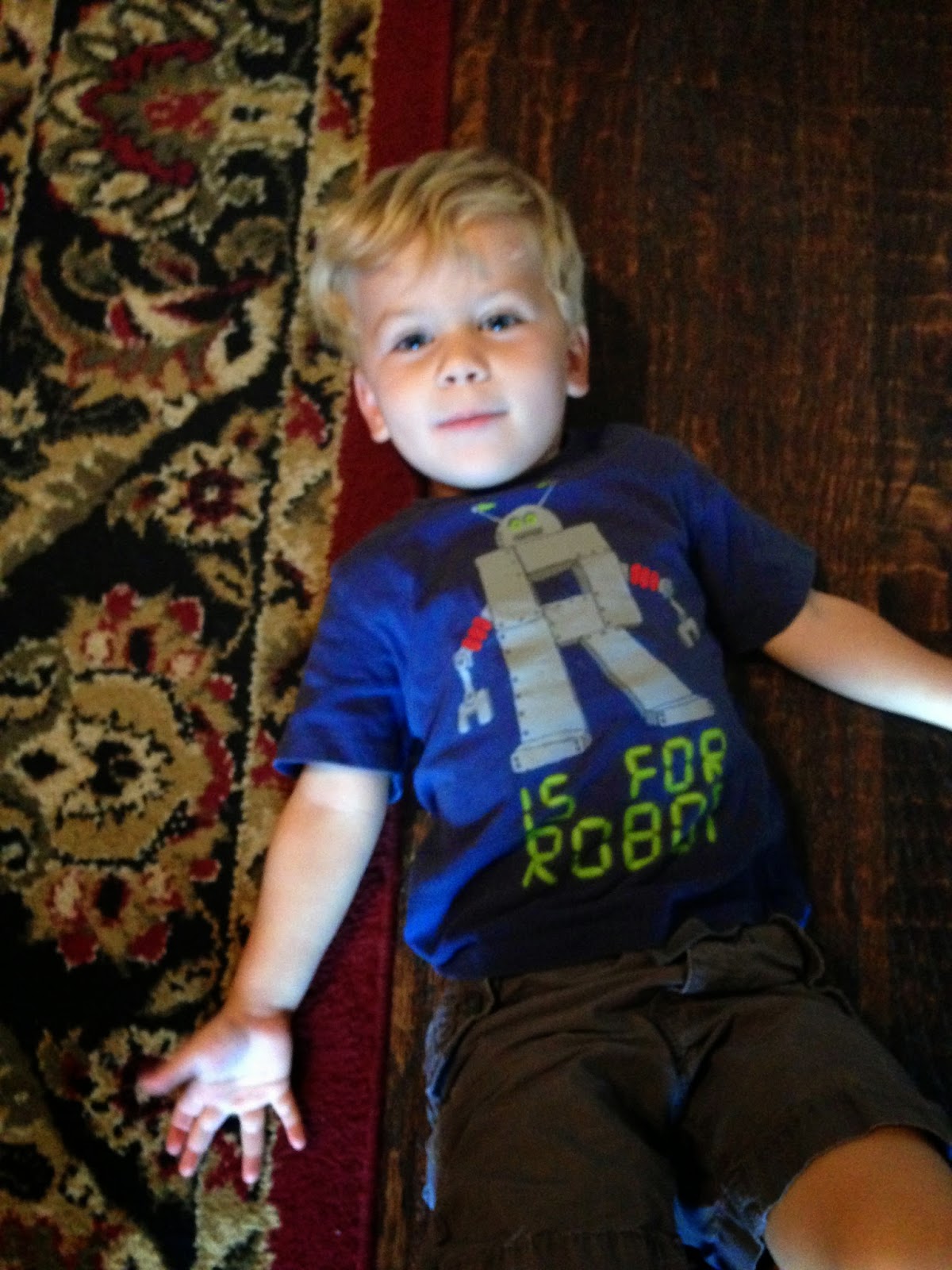 This sticker from Adventure Kids just makes me laugh: "Needs Reminders." (For the potty.) 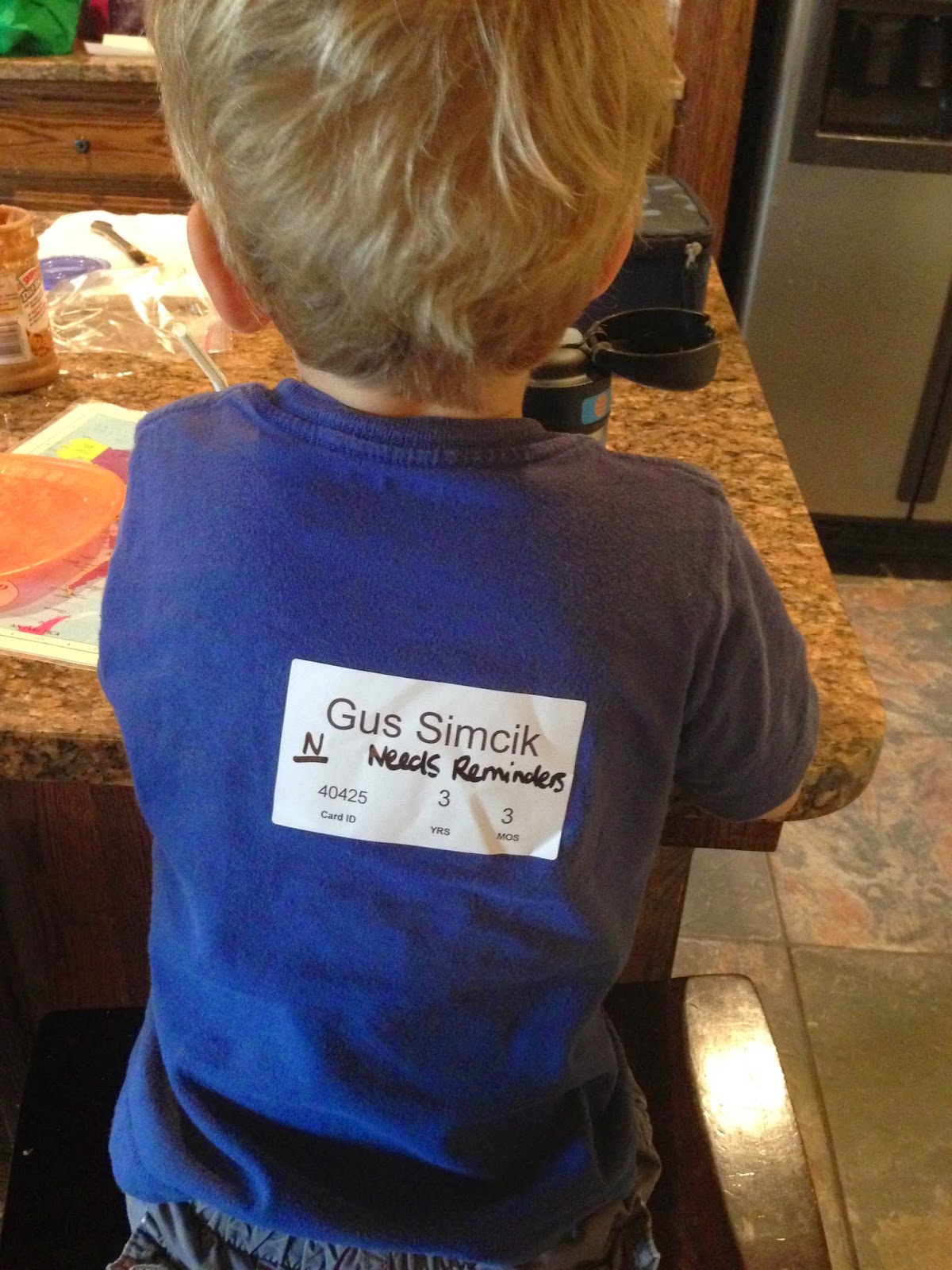 We had a little cold front on Friday (65 degrees) and Gus ran to the coat closet where we keep the winter gear and got out all the hats and gloves! 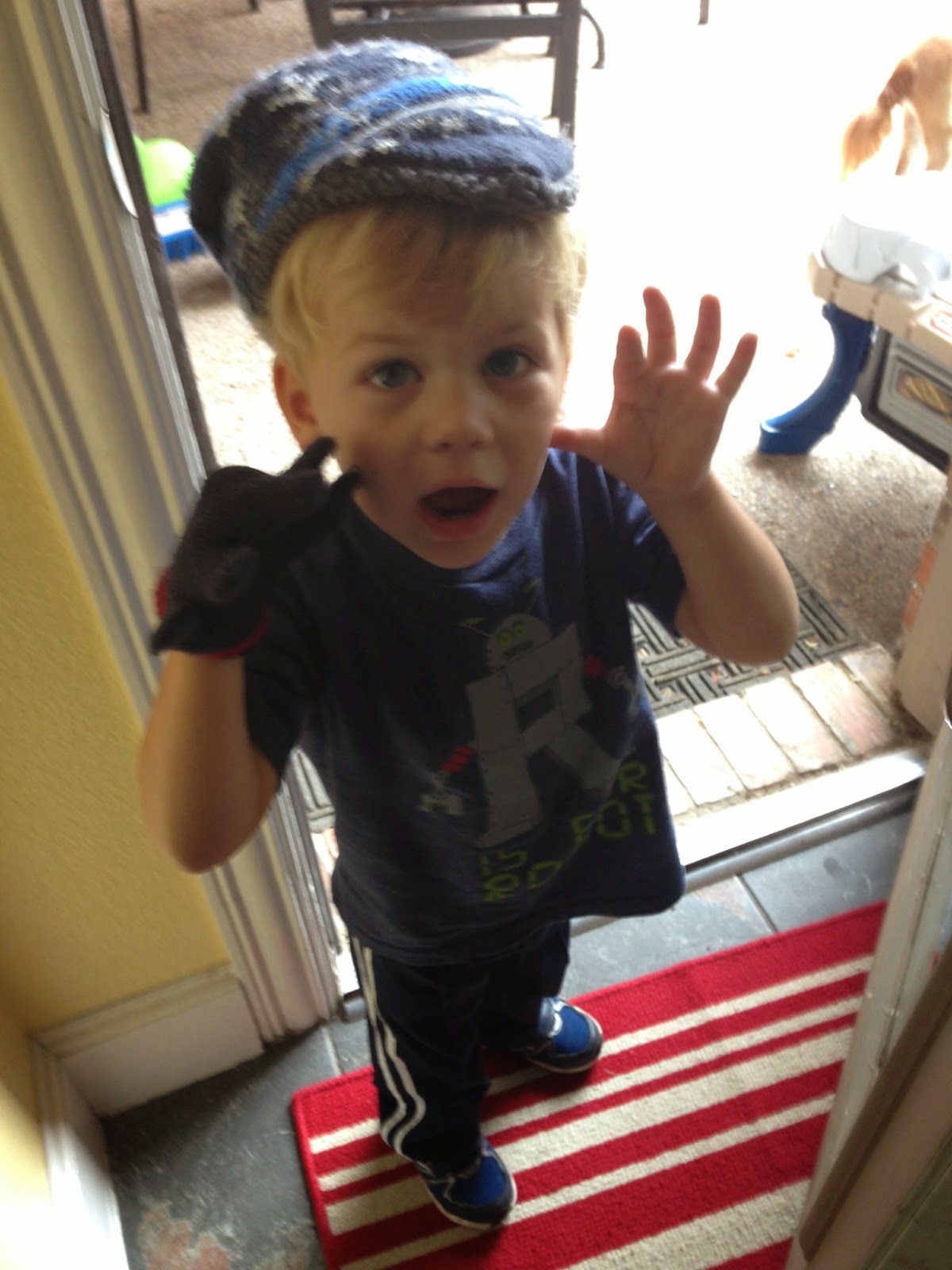 We love our goofy Gus!
Posted by Writinggal at 8:54 PM 3 comments:

Coming around to Coffee 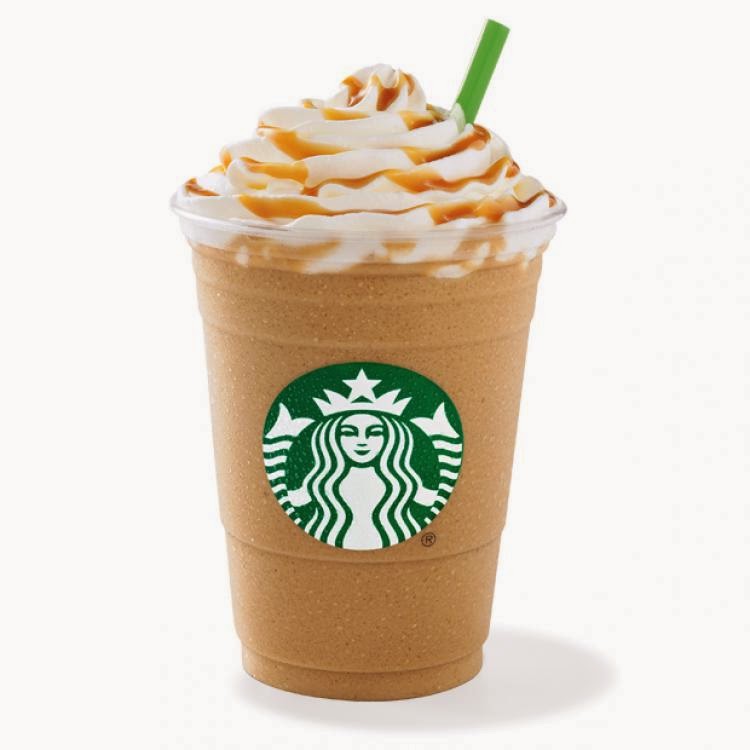 You might recall my blog from seven years ago about my coffee confusion. If not, the gist was that I don't understand how to make coffee because, while everyone says it's easy, it's very complicated to me. Then five years ago I wrote about how I wish I liked Starbucks but I didn't. Also, I've never liked how coffee drinkers are all, "Don't talk to me until I've had my coffee." My general stance has been anti-coffee.

So I don't know how this happened but lately I've been dipping my toe into the coffee pool. I guess it started with Starbucks and maybe the fact that they are often in Targets. And Kroger. And basically every corner. I began to figure out that I liked frappuccinos. I mean, they're basically milkshakes. Expensive milkshakes. At first I would say "half caf" and even that would give me the shakes.

But slowly I stopped saying "had caf" and went full on caf. I seem to be handling it okay.

And then there was the time that RaceTrac opened right by my house and they offered 49cent coffee. They had all these fun creamers there so you could totally froo froo up your joe. Mine was practically white. I started getting one of those just about every other day.  But they did raise my heart rate and then RaceTrac raised the price. But still, now they are only $1.19 and to me, a non-coffee connoisseur, they rival Starbucks.

I can think of two more circumstances that propelled me into almost a full-fledge coffee drinker: my friends got me a $50 Starbucks gift card for my birthday. FIFTY DOLLARS? Do you know how long it takes to spend $50 at Starbucks? Not long actually, probably about a month. And then I put that gift card on my phone with the Starbucks app and now I keep reloading it because I'm in the loyalty club and OMG I am one point away from a FREE drink!

Now I still say I am almost a full fledge coffee drinker because there is
one thing holding me back from jumping in with both feet:

Actual black coffee is soooo gross to me; I can barely sip it. And I tried iced coffee and it was second only to hot coffee in yucky-ness. But I DO love the smell and I can see the appeal in waking up and sipping on a hot drink and I love holding it while I shop at Target. Oh, and those Pumpkin Spice Lattes! They're out now for a limited time. Although I did read an article about what's in them ("a toxic amount of sugar") and what's not in them (pumpkin) and that sort of ruined it for me.

So even though I am still in the anti-coffee-camp, I wanted to explain why you might see me at a Starbucks, holding up my phone app like a pro. Don't worry; I'm just getting an overpriced milkshake.