Maybe it's because it's warm here or maybe it's because Leo and Gus have been so darn good, but Santa has been spending a lot of the Christmas season in the DFW area. The boys have had lots of opportunities to sit on his lap and remind him what gifts they want. Leo is a big fan; Gus, not so much. In fact, Leo is so familiar with the jolly guy that when we were in Starbucks, Leo asked a portly, bearded customer if HE was Santa. I think I saved it by saying, "Leo, he is not old enough to be Santa!" Leo sat on his lap anyway. 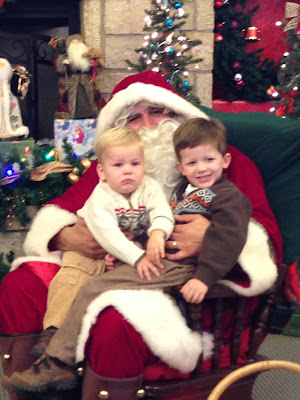 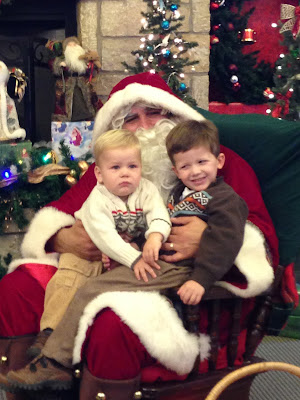 The next weekend Santa came to our neighborhood's clubhouse. 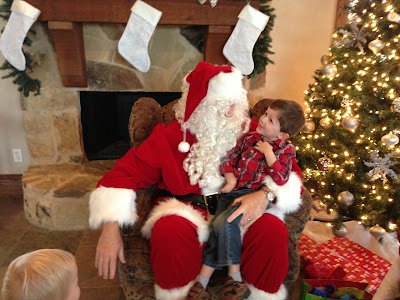 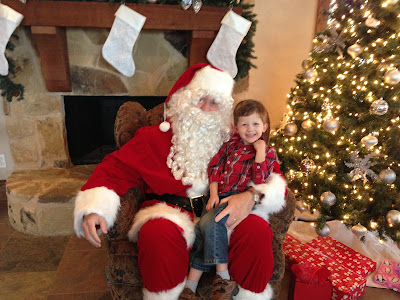 This time he even brought Leo and Gus gifts! Leo got some cool Jake and the Neverland Pirates stuff while Gus got a book that he already owned. (Jipped again!) 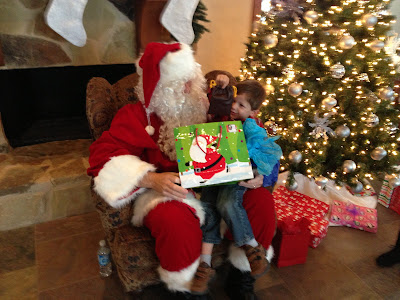 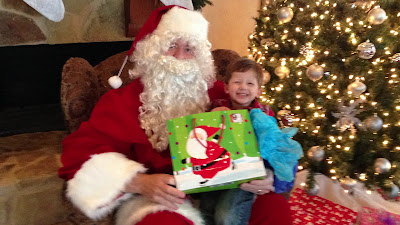 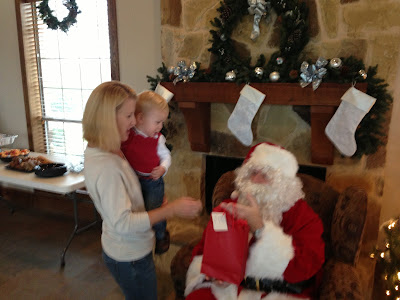 No wonder this is the closest Gus would get to Santa!
The next day we rode the North Pole Express in Grapevine. Since the train goes to the North Pole, we picked up Santa and he came on board! (Gus, who may just start an anti-Santa Facebook page, is not pictured.) 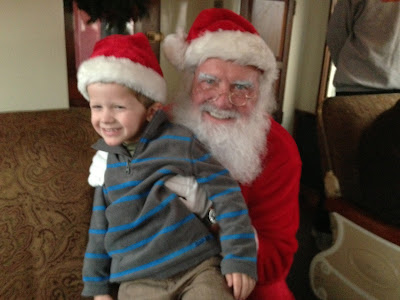 The following weekend we went to cousin Jasper's house in Colleyville and whaddya know? Santa AND Mrs. Clause made an appearance. Gus agreed to be in the picture under two conditions: that he sit on mommy's lap (not Santa's) and got to hold his blanket. 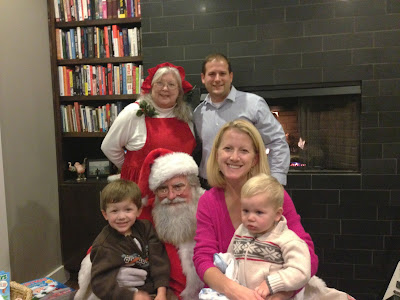 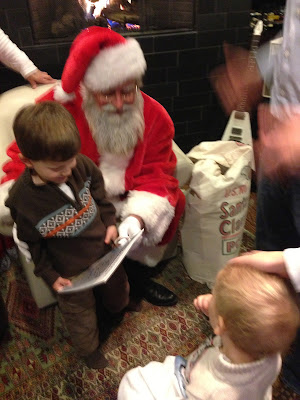 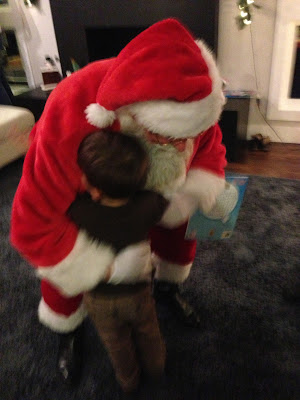 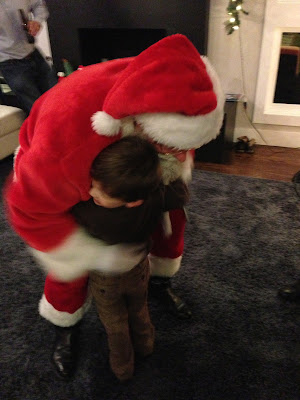 Leo approached Santa at the end of the party just to reiterate that he had moved from Georgia to Texas and that he wanted "decorations" for Christmas. 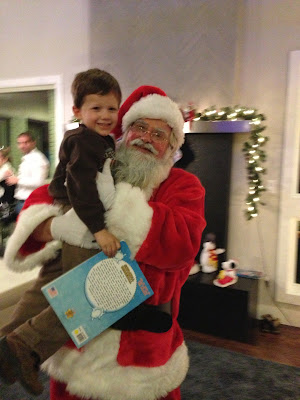 Then Leo gave his new best friend one more hug. I think that was finally our last Santa encounter for the season...unless we run into him at Starbucks again. 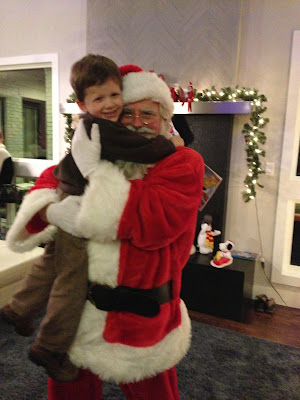 Whatever happened to waterbeds? 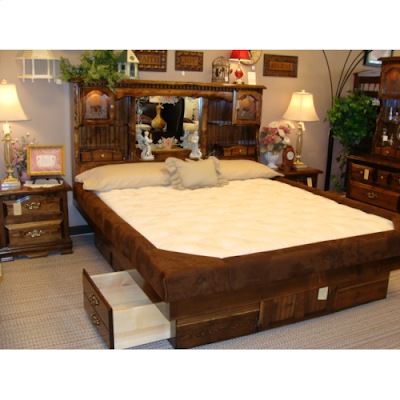 I remember that, at any given sleepover between the years of 1987 and 1994, I would find myself slumbering on a waterbed. Usually I would share it--a twin!--with my bee-fry of the moment. When you sleep with another person on a waterbed, two things happen: 1. You roll towards the person and you both end up in the middle of the bed 2. You wake up sweaty due to the plastic mattress cover.

Although I never owned a waterbed (I was a daybed gal), I know that there are other downsides: You can't just plop down on your bed; if you plop you drop. And if you plop too hard, you might make it pop. You can't really set anything on your bed for fear it will tip over in a tidal wave. And then there's the big one: the threat of motion sickness!

But for some reason back in the era I mentioned, WBs were all the rage. I actually can think of more than one reason:

1. If you aren't prone to motion sickness, it can feel really cool to sleep on a waterbed. I bet it's even therapeutic.
2. Shelves. Instead of a boring old headboard, a lot of waterbeds had shelves. You could display all your night reading, tissues and knick knacks up there. Some even had a mirror.
3. The storage! Most waterbeds have drawers underneath them. That makes a ton of sense. Why have an extra dresser or chest-a-drawers when you could just pack it all into one unit? And while I'm asking questions, I'd like to know why regular (land?) beds DON'T have drawers underneath them? Why are they exclusively for WBs?

Like me, you have probably been wondering what happened to waterbeds.  I'm going to do a little research (perhaps Wikipedia) and find out.

I'm back. And I learned A LOT about waterbeds. They really were originally designed to be therapeutic. Apparently they're good for your back. Oh, and I was just guessing on the years 1987 thru 1994; I was sort of right. Their popularity peaked in 1987 with 22% of the market! Can you imagine if 22% of your friends had waterbeds right now? Like, let's say you have 16 friends. (Facebook friends don't count.) Well, that would be like...doing math...don't have a calculator so bear with me...like between three and four. Weird, right? Or are you not that stunned?

But the take away from my research was that WB's were a pain in the ass. They're heavy to move and you had to drain them first. They could spring leaks. You have to heat them and that gets expensive.

I'm sure their demise had absolutely nothing to do with the fact that they're just plain Tacky. (Yes, that capital "T" is intentional.) 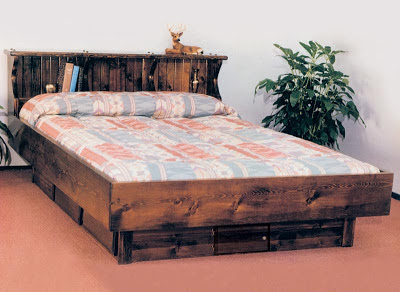 Gus has been here 18 months 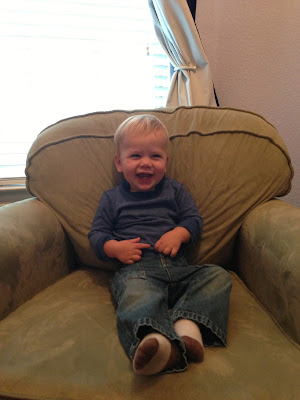 I think 18 months is my favorite age. So today we will celebrate and then it's all down hill from here! It really is halfway between a baby and a kid. And that's how Gus looks too--kind of like a baby, kind of like a kid. He and Leo can really play together; they especially like to play in the backyard. Leo says they're playing pirates but I'm not sure Gus knows that. Gus just wants to play anything that has to do with balls. He looks out the window and says, "bawl" all day long. If he wants to distinguish between a regular ball and a basketball, he says, "bat ball."

He's serious about shoes. When he sees them, he says, "Shoe!" (Very clearly, I might add). And then you HAVE to put them on him. He doesn't understand why his shoes would be in sight but you wouldn't put them on him. Same with his jacket. If he sees it, it's gotta go on. Can't put on Leo's first.

He's also serious about his Dada. When Frank comes home, or if he just hears the door, he says, "Dada! Dada!" Gus looks like he's going to explode with happiness! He runs to Frank and insists that Frank hold him for the next 15 minutes. If he sees pictures of Frank or anything belonging to him (like a shirt) he says, "Dada! Dada!"

We took Gus to his 18 month appointment today. In preparation for it, I typed out the words he can say and other ways he communicates:

Other communication notes:
·      Can point to people/things when asked: “Where is Grandmother?” or “Where is your blanket?”
·      Can follow directions: “Put the ball in the basket” or “Put the blocks in the bag” or “Go to your high chair.”
·      If we say, “I’m going to take your picture” he says, “Cheese!”
Can point to parts of his face when asked: “Where is your nose?” or “Where are your ears?"
Does all the motions to "Itsy Bitsy Spider."

Then, just for fun, I checked Leo's 18 month blog. He could say 75 words and speak in three word phrases! He could say Texas and we didn't even live here. The kid could say "umbrella!" Needless to say, I got a little concerned about Gus. So at his appointment today I shared that with the pediatrician--how much Leo said versus Gus.  As it turns out, Leo is the abnormal one! Gus is just fine. She said there are plenty of kids his age who say more and plenty who say less. He's right in the middle. Says she's not worried about him at all. "What about how he doesn't say Mama?" I asked. "Not unusual," she said.

After the appointment we went to a friend's house and as I was picking Gus up out of the car, he pointed at me and said, "Mama, Mama, Mama, Mama." Leo said we should call the doctor and tell her! 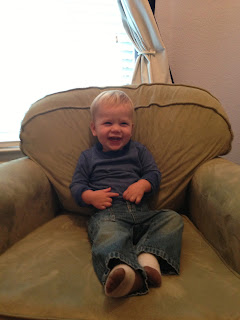 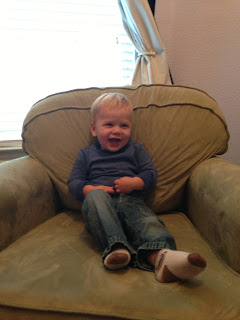 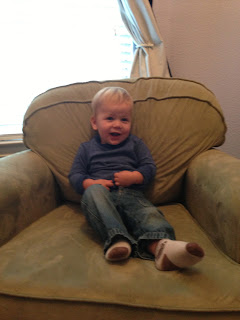 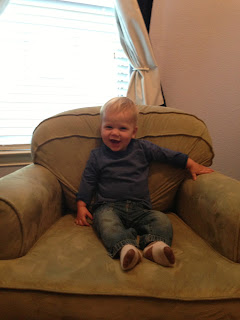 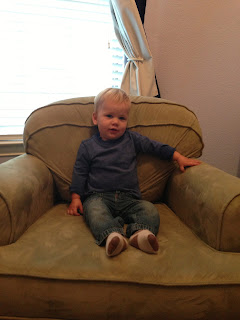 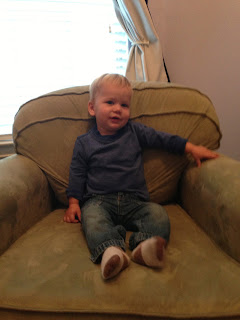 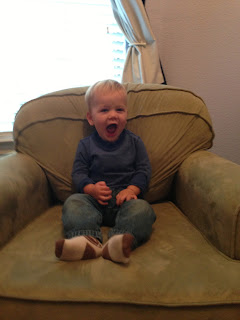 They even give grades and Gus got an A+ for physical exam and an A+ for development :)

She also commented that he's very fast, when she saw him being chased by Leo all over the exam room.

So to sum it up, our Gus doesn't say much but he's super cute, super sweet and super fast! We love him to pieces.