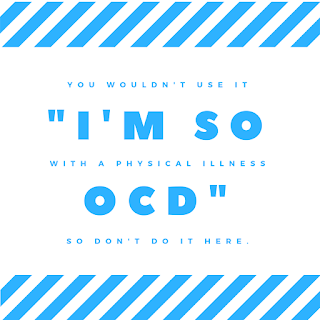 "I'm so OCD. I HAVE to have all my silverware stacked up according to the TYPE of utensil they are."

"Ew, I hate when my food touches each other. I'm just OCD about it."

Stop it. Just stop. You do NOT have Obsessive Compulsive Disorder. And what's more, if you did, you would NOT be bragging about it.

You are NOT in the club. You actually have NO IDEA what it is like to be in a club like this. If you did, you wouldn't say it so flippantly.

When you say, "I'm so OCD" but you aren't, you are trivializing a disease that is serious, that is debilitating... a condition that makes life unbearable.

"He is SO retarded."

"Sugar makes me crazy. I'm such a diabetic."

"My hair looks awful. It's like I have cancer."

Yes, it is JUST like doing any of the above.

Obviously I have a strong connection to OCD. Let me tell you what life is like living with someone with OCD. True OCD.

EVERYTHING triggers it. People with OCD CANNOT function in a lot of situations...going to school, church, restaurants, vacations, people's homes...all nightmares for the person suffering, plus their family.

They freak out, make scenes, run away.

Obsessive Compulsive Disorder is nothing like you think it is. It doesn't mean you like to wash your hands. But it may mean you HAVE to wash your hands hundreds of times a day until they are raw. It doesn't mean you don't like the smell of vomit. It means that you think someone could vomit at any time and therefore you can't go ANYWHERE or even hear someone cough without having a complete panic attack. It doesn't mean that you don't like the feel of tags on your shirt. It means you have to read the tag on your shirt 100 times or someone you know will die.

THAT is life with OCD. And it completely sucks.

So when you casually say you have OCD, you are hurting those that do. Because when they reach out and say THEY truly have OCD, no one takes it seriously. No one understands the severity of the situation.

The other day I mentioned to someone that my loved one has OCD and she said, "Oh, I know all about that. My husband! He has to have everything clean all the time."

YOU HAVE NO IDEA, is all I can think.

So stop. Please stop. Take it out of your vocabulary. Quit saying that your preference for cleanliness and your proclivity to adjust your picture frames makes you "so OCD."

You don't have OCD and when you say that, it makes you sound retarded.