Don't Give up on Giving up

It's Lent, so a common topic in my Catholic circles is, "How are you celebrating Lent?" or "How are you teaching your children about Lent?" When I respond with, "My husband gave up soda; I gave up TV; Leo gave up cookies and Gus gave up diapers," I'm pretty sure I see the hint of an eye roll.

See, it's not cool to give up things anymore.

You gotta DO something. They'll come back with, "Well, in my family we're not really 'giving up' anything. We're…"

They'll say that they feel like DOING something strengthens their relationship with God more than merely 'giving up' something like dessert (insert more obvious eye roll here).  I have also seen lots of blog posts geared towards this topic: "Instead of just giving up something, which has no impact on your walk with God, try DOING something this Lent." This is followed by a list of ideas to replace such a silly idea like giving up Facebook.

So here's my response--my theoretical response, if I really felt like stirring up a holy debate, which I don't, except here on my blog:

Hey, that's great. DOING stuff is always a good thing. That's definitely a part of Lent. We're even DOING something at my house by reading a little story every day and opening windows on this Lenten ark, much like an advent calendar.

But let's remember how it all started. Jesus GAVE UP food for 40 days and nights in the desert.

So first, it's a sacrifice. When we give up something we enjoy--no matter how trivial it seems compared to what Jesus did--we too are making a sacrifice. And that sacrifice is a tribute to Jesus. So no, giving up dessert doesn't necessarily mean we're going to spend that dessert time praying more. But I believe everything doesn't have to be so directly correlated. It doesn't have to be so obvious like "No chocolate = more Bible reading." But if it does, that's just a bonus.

And last, giving up things helps you to learn how to withstand temptation. During Jesus' 40 days, he was tempted three times by the devil. We are tempted all the time in our daily lives. And trust me, during Lent I have been tempted to turn on the TV. Frank has been tempted to drink soda. Leo has been tempted (probably the most!) to eat cookies. And Gus. Well, there are days where he would probably love to throw in the towel and wear a diaper. But every time we don't give in, we are getting stronger. So when bigger temptations come our way, we will have the strength to withstand them.

So sure, go out and DO, DO, DO but remember, don't let that right hand know what that left is doing (winky face: it's not a competition about who is doing or giving more). And then ask yourself, WWJD?

He would GIVE UP something. So should we.

We are getting to be regulars on this route. Just look at Leo here, my seasoned traveler. 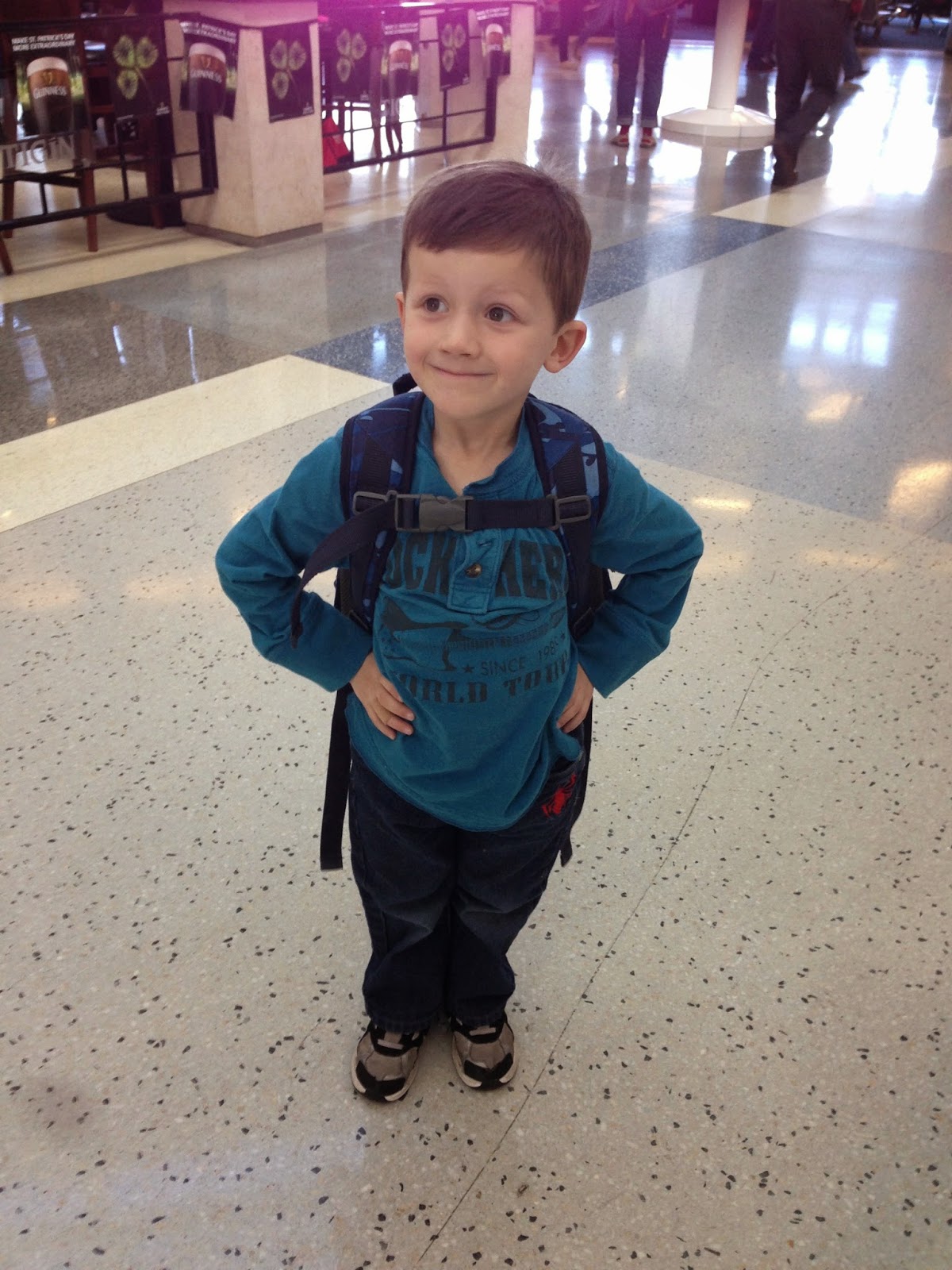 Sierra Mist is his drink of choice on the airplane. 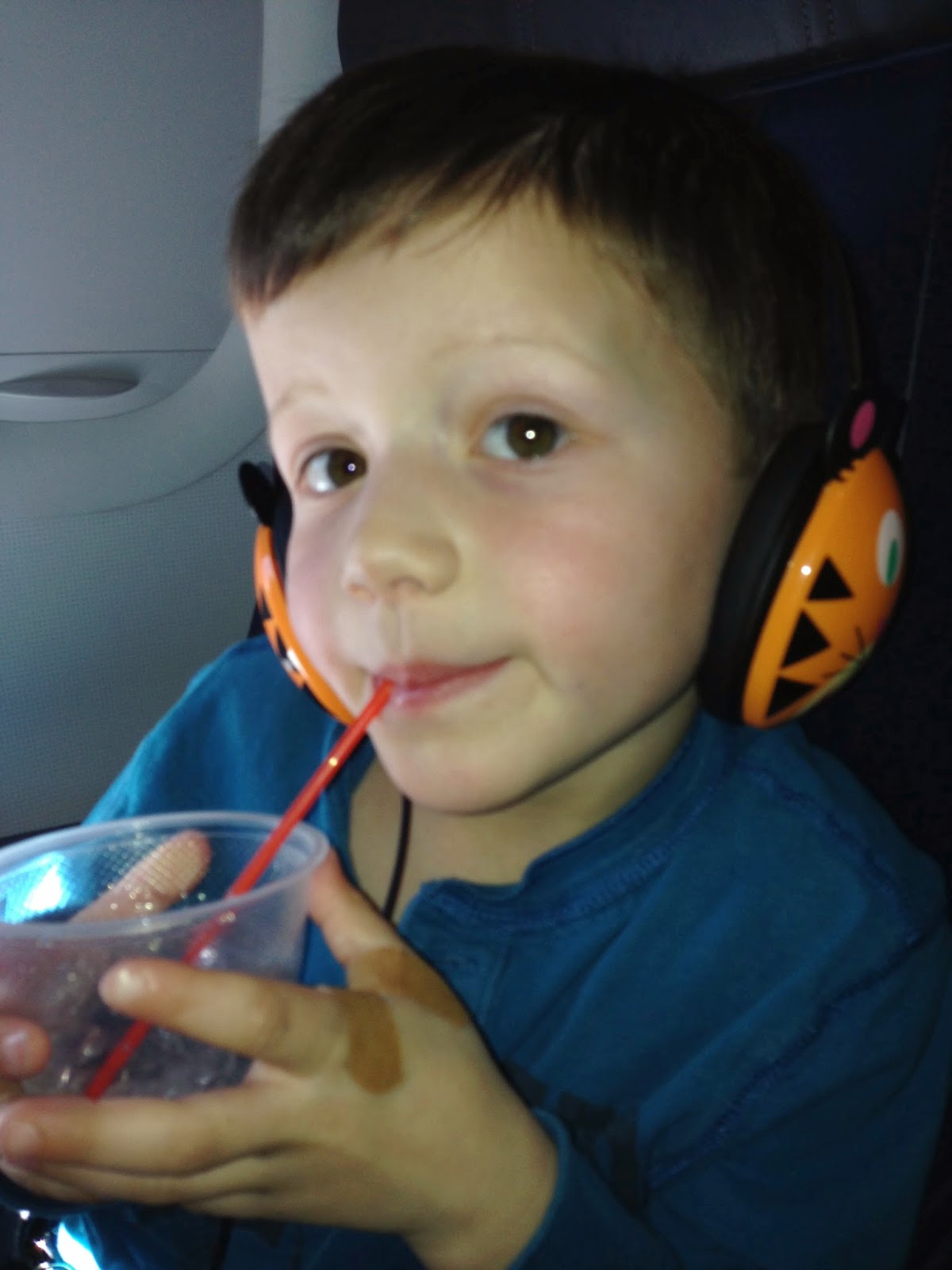 On this trip it was just Leo and me. We LOVE visiting our old friends in Atlanta, especially our besties, John and Ms. Claire. Here is a sweet moment when Leo greeted John as he was getting off the school bus. 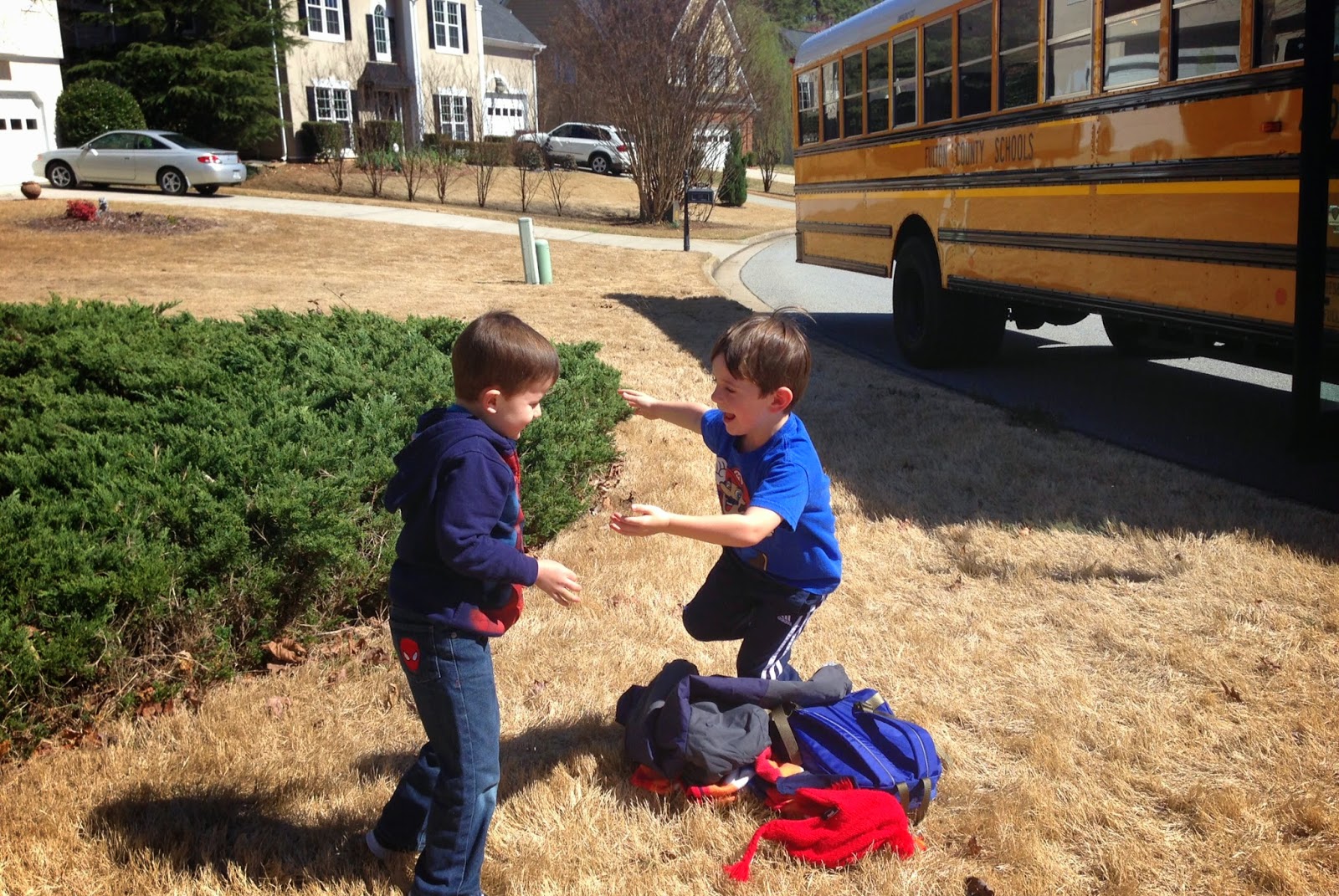 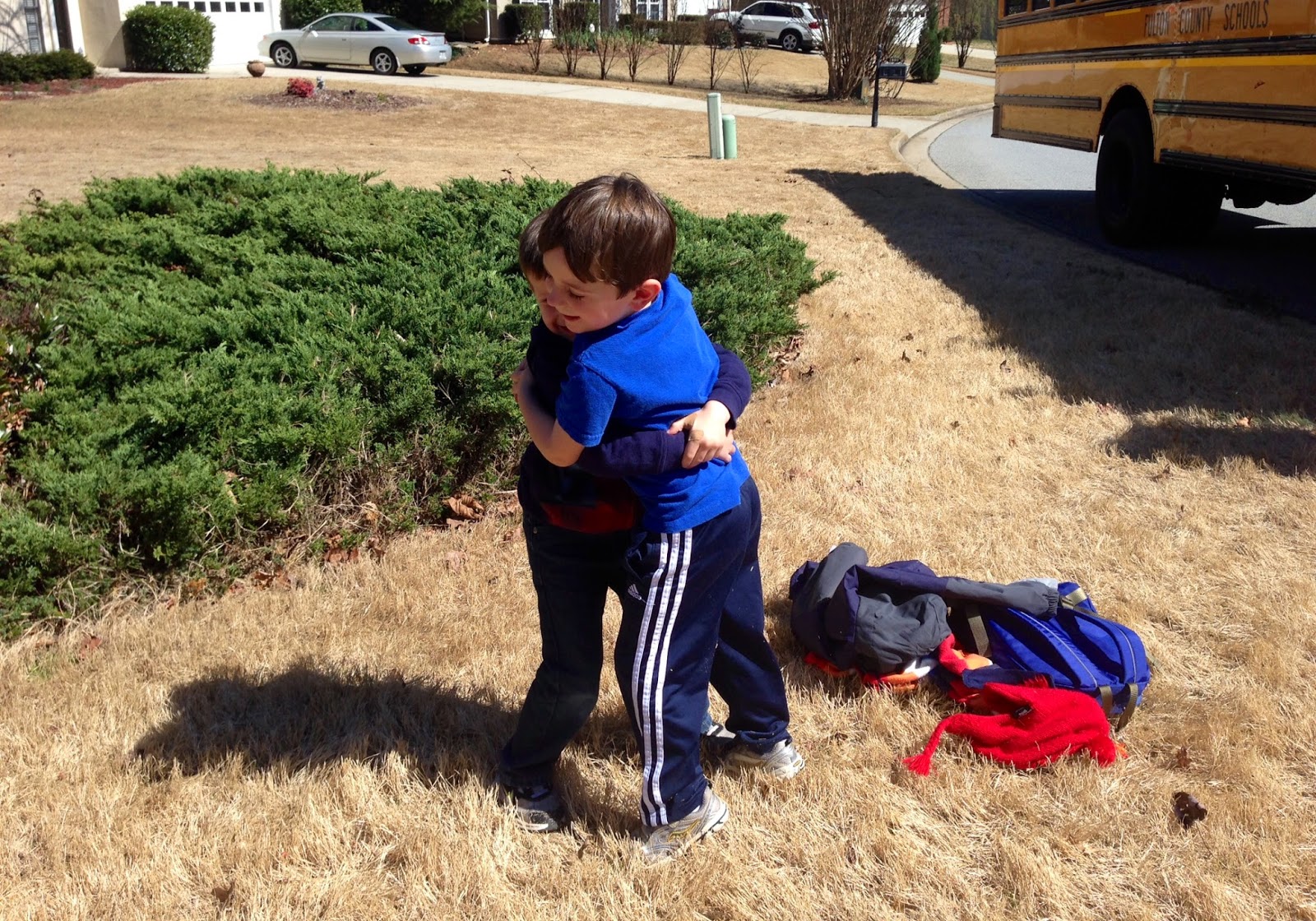 Claire and I took the boys to Chattanooga for a little overnight excursion. They had SO much fun at the Children's Museum. 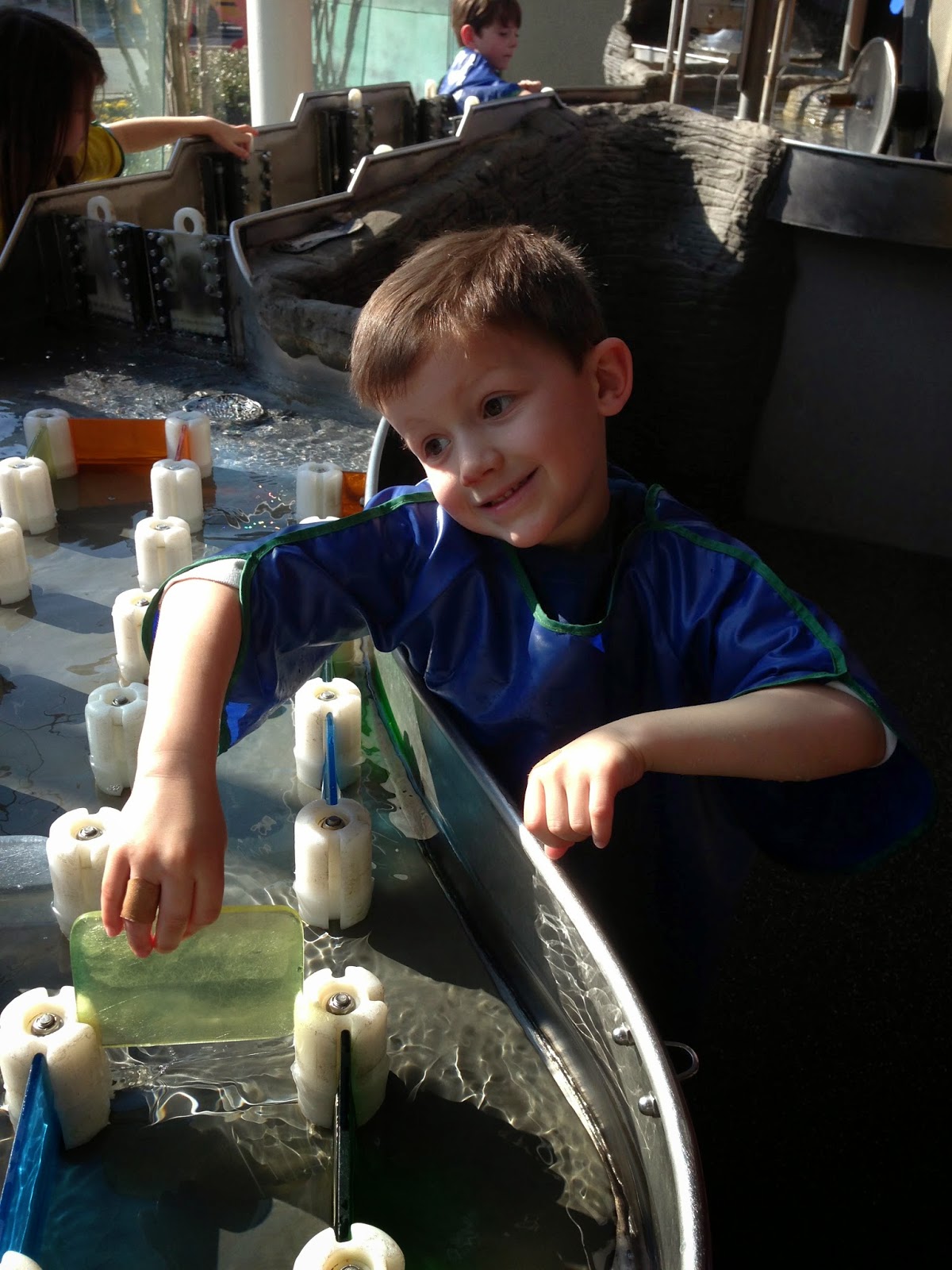 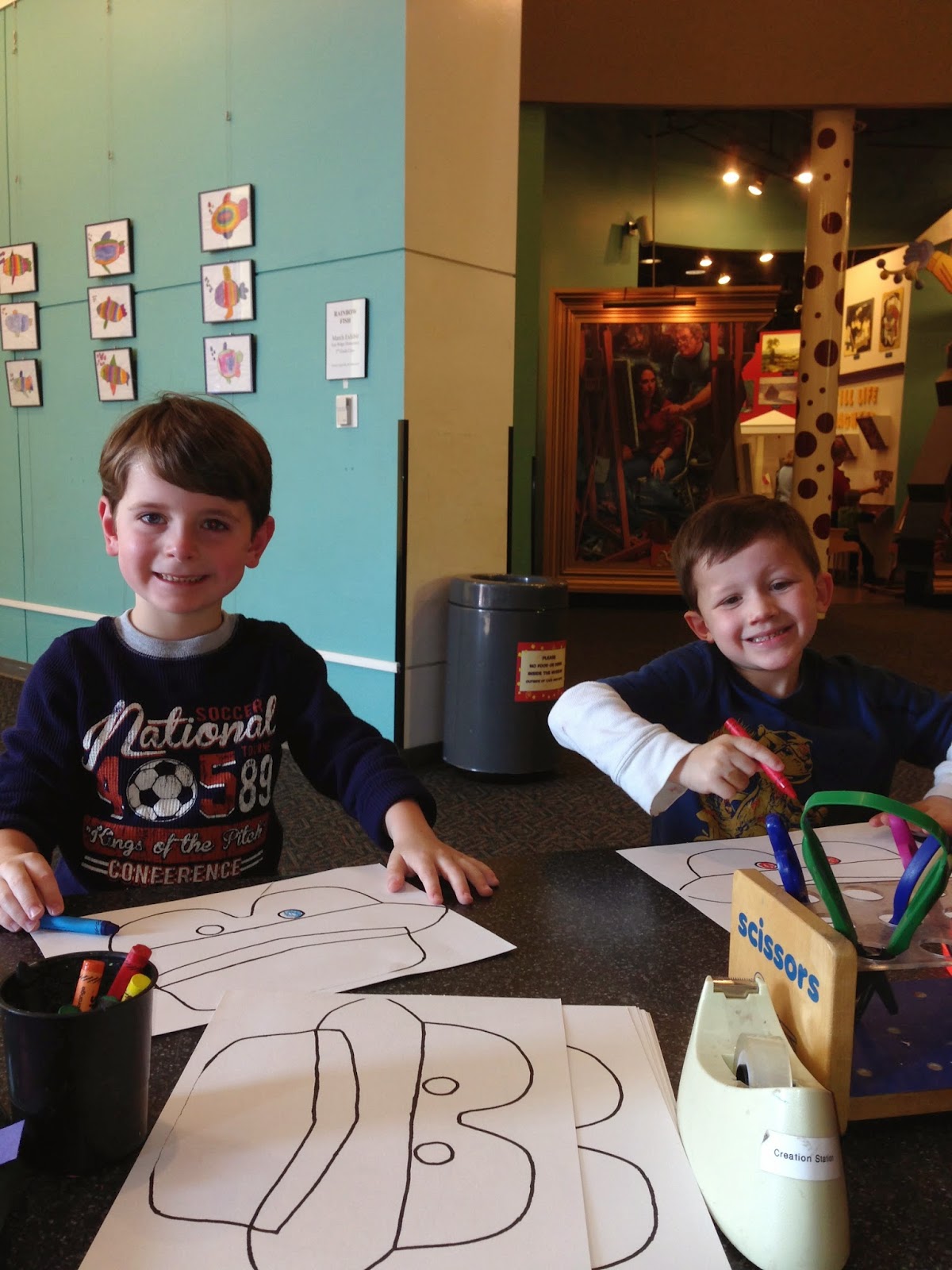 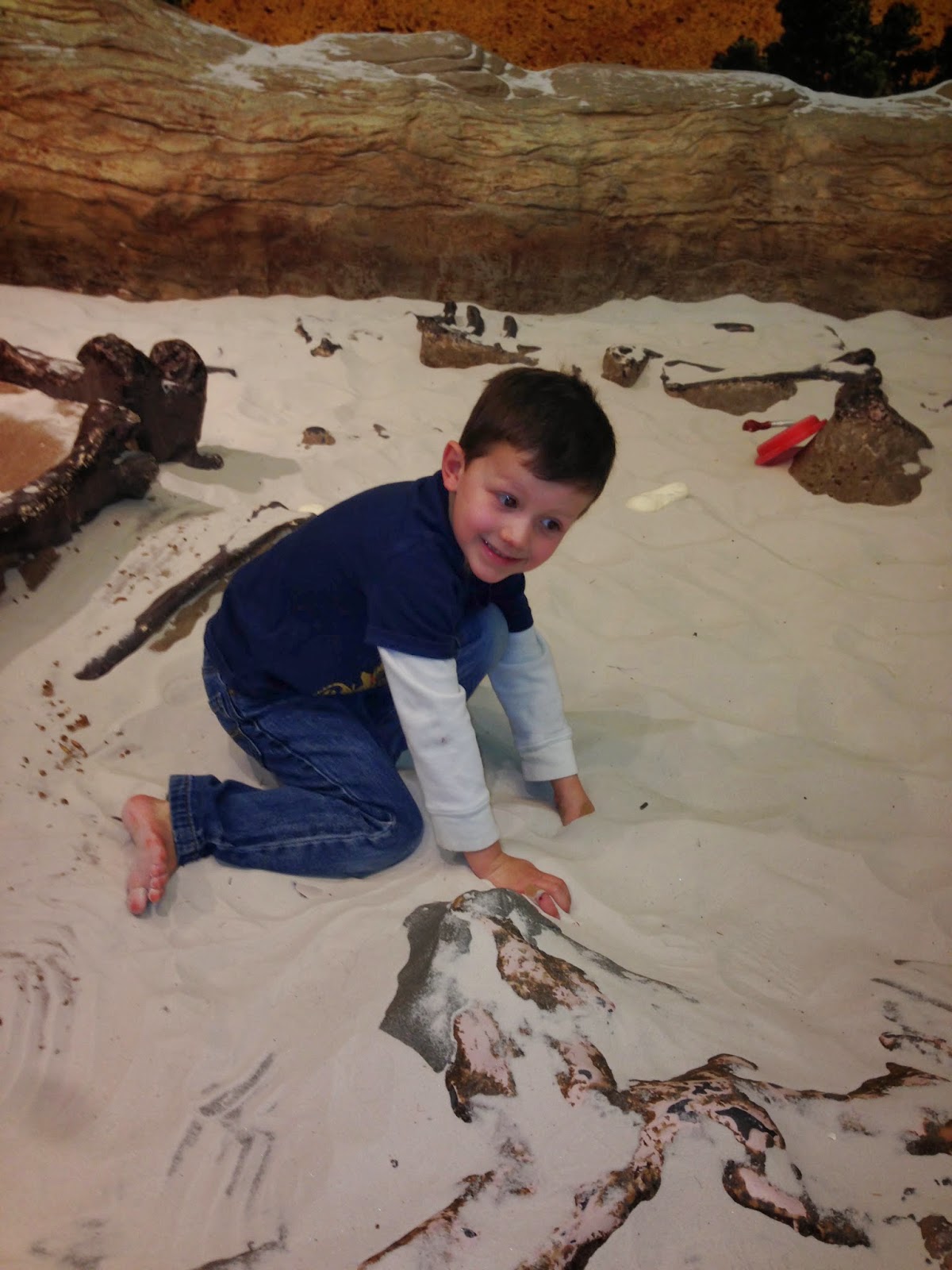 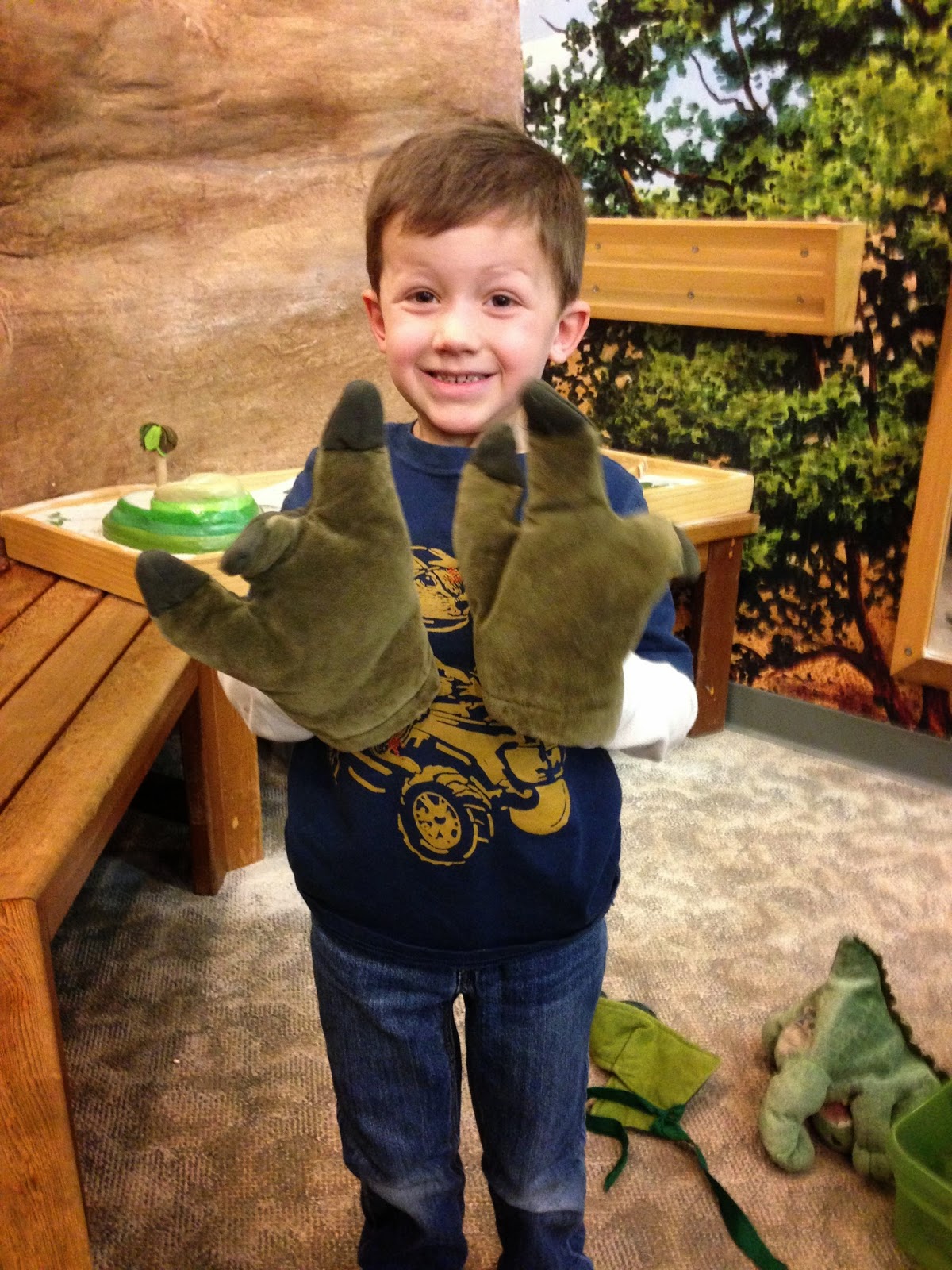 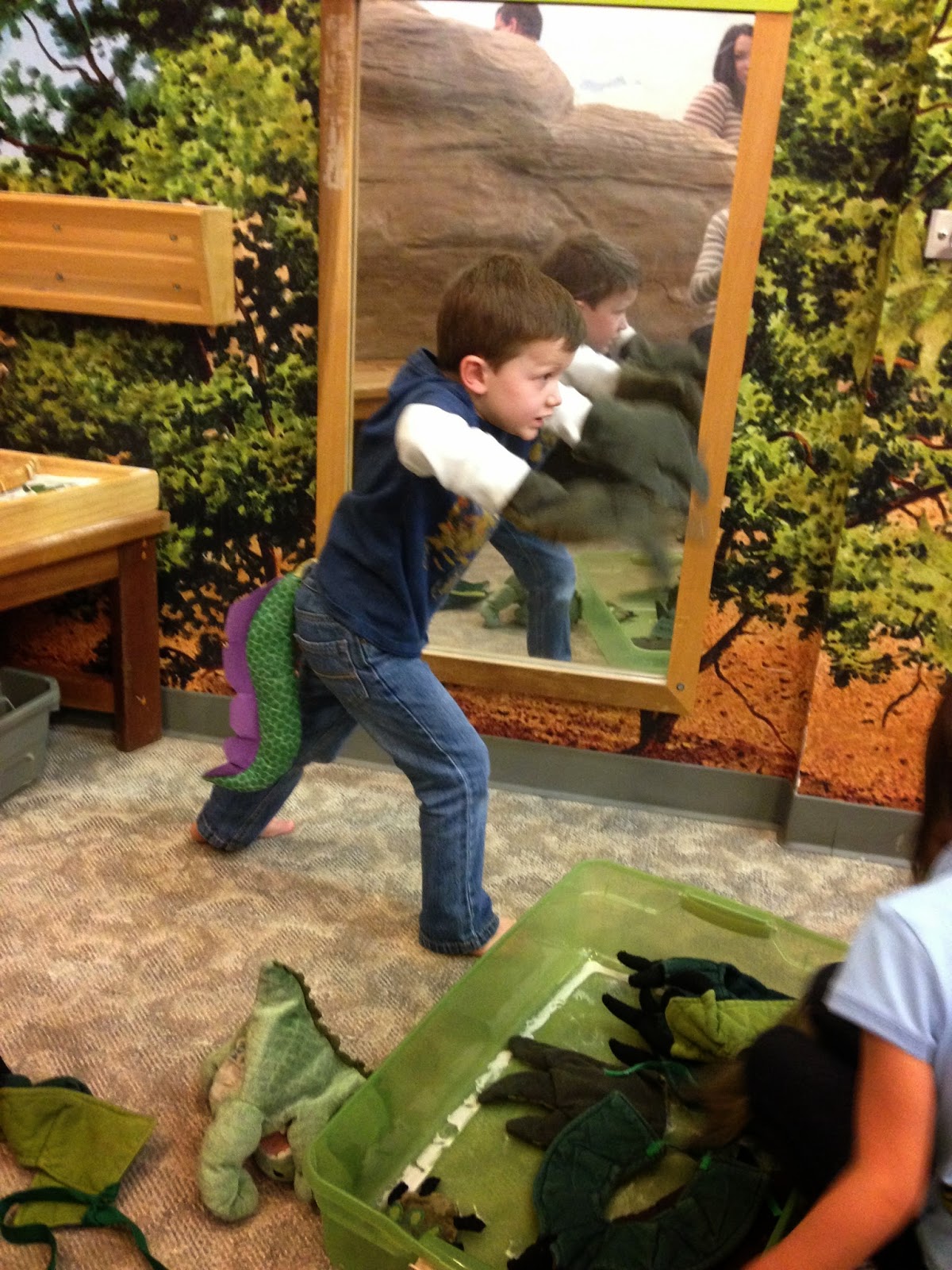 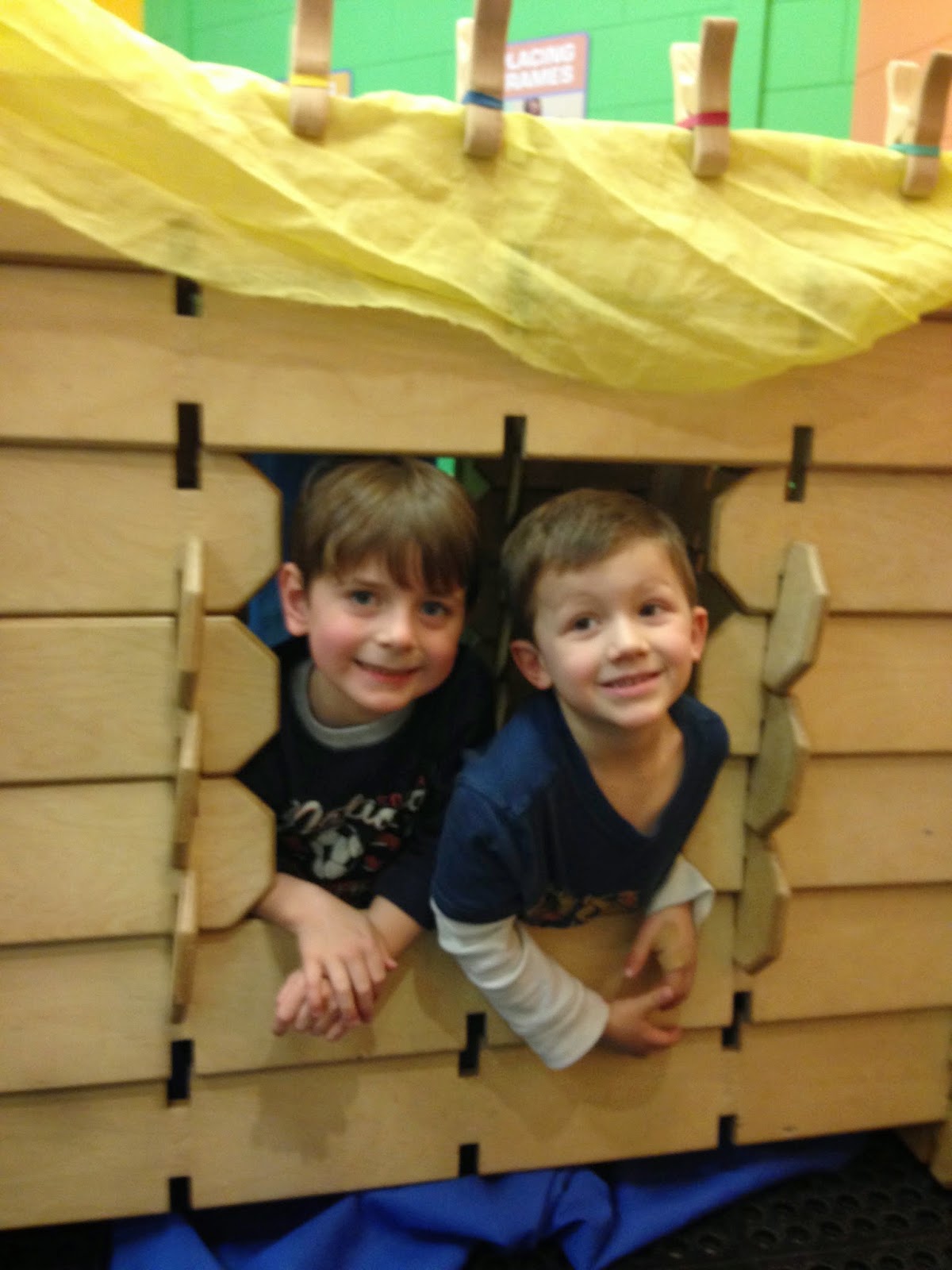 We played for three hours and would have stayed longer except we were hungry. So we went to Blue Plate, a restaurant we had all been to before and liked in Chattanooga. John snapped this photo of the mommies. (Yes, we needed beers after a morning at the museum with those two.) 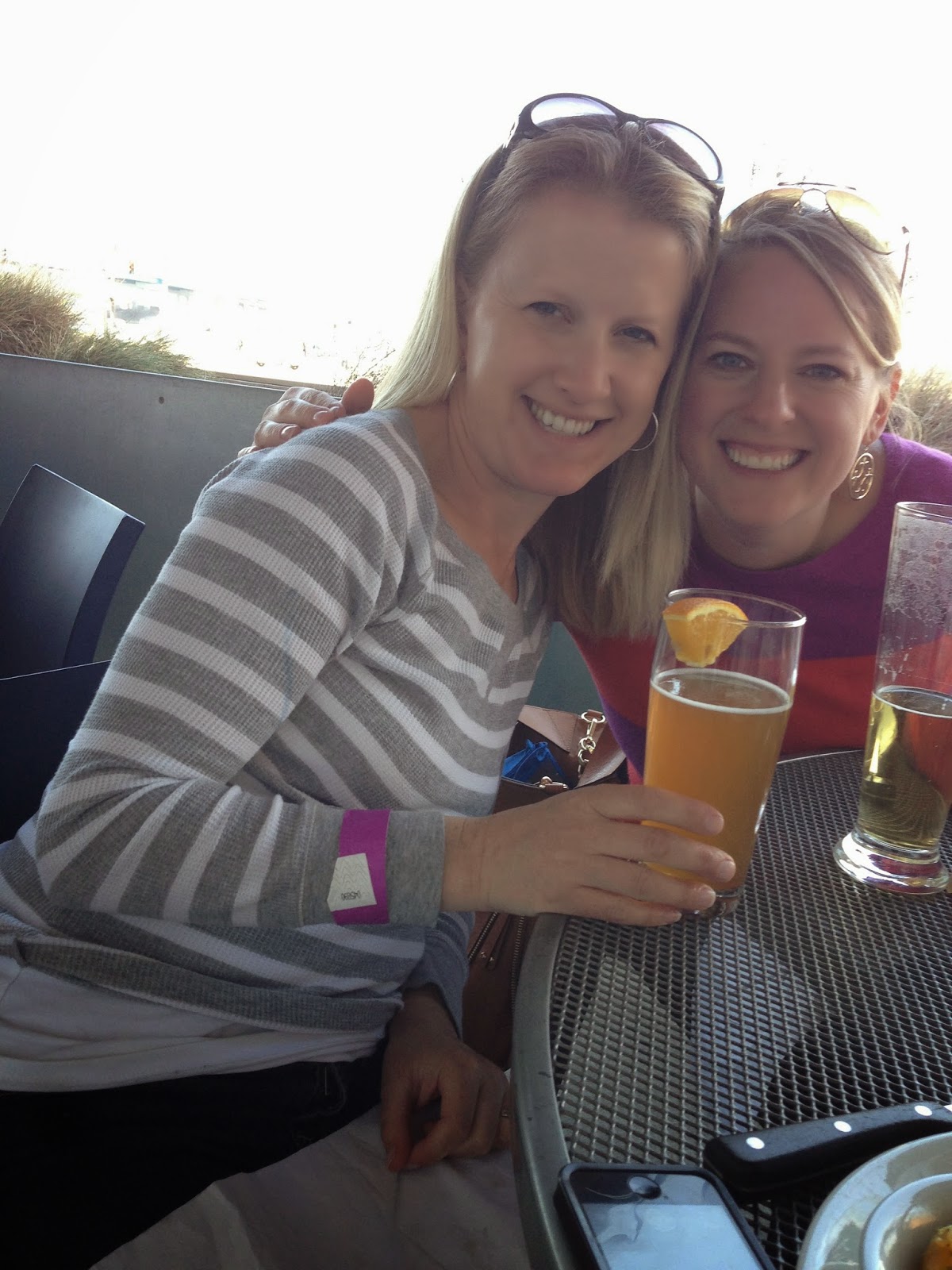 Here are our two almost-six-year-olds running around by the river; Isn't Chattanooga pretty? 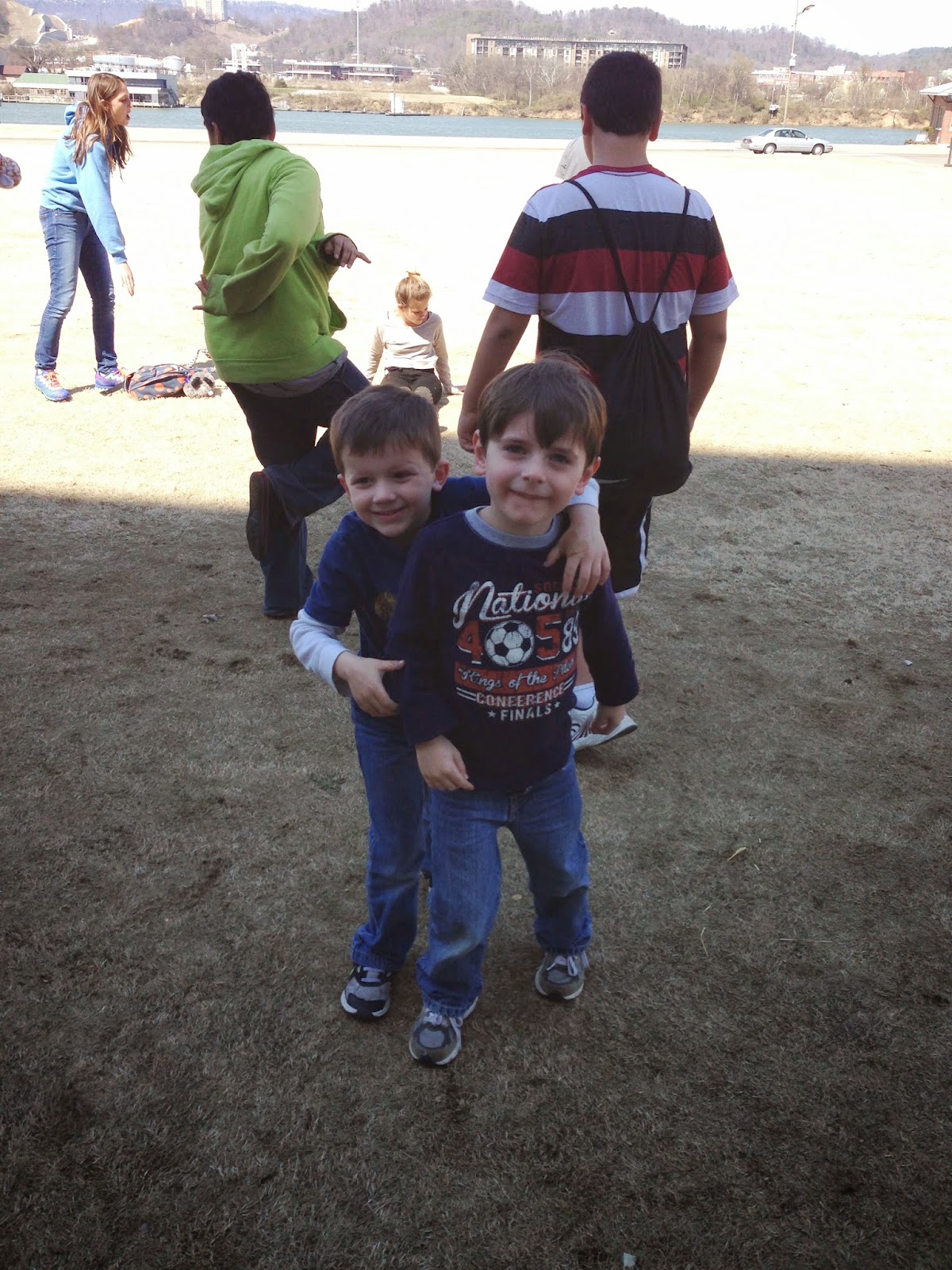 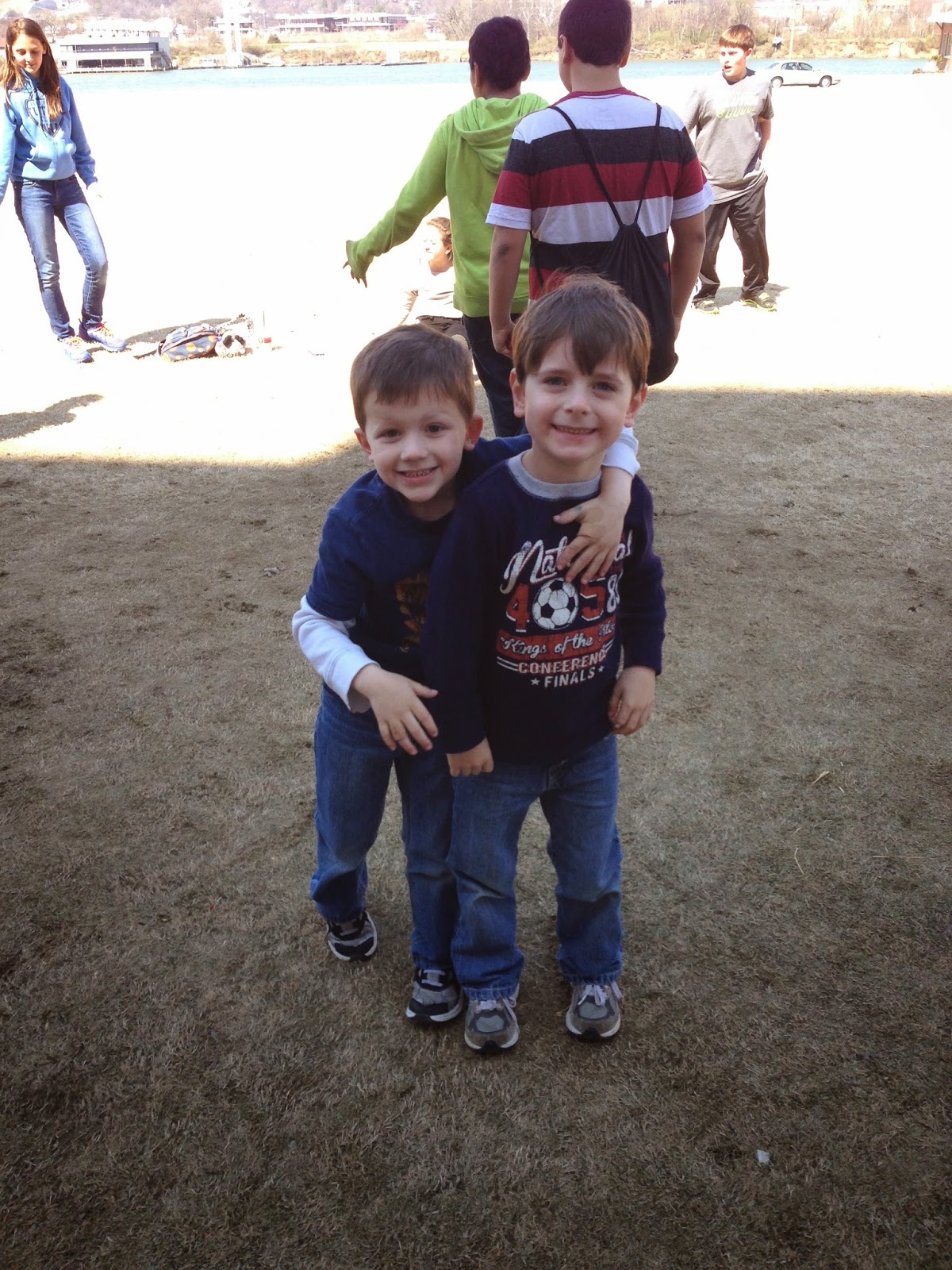 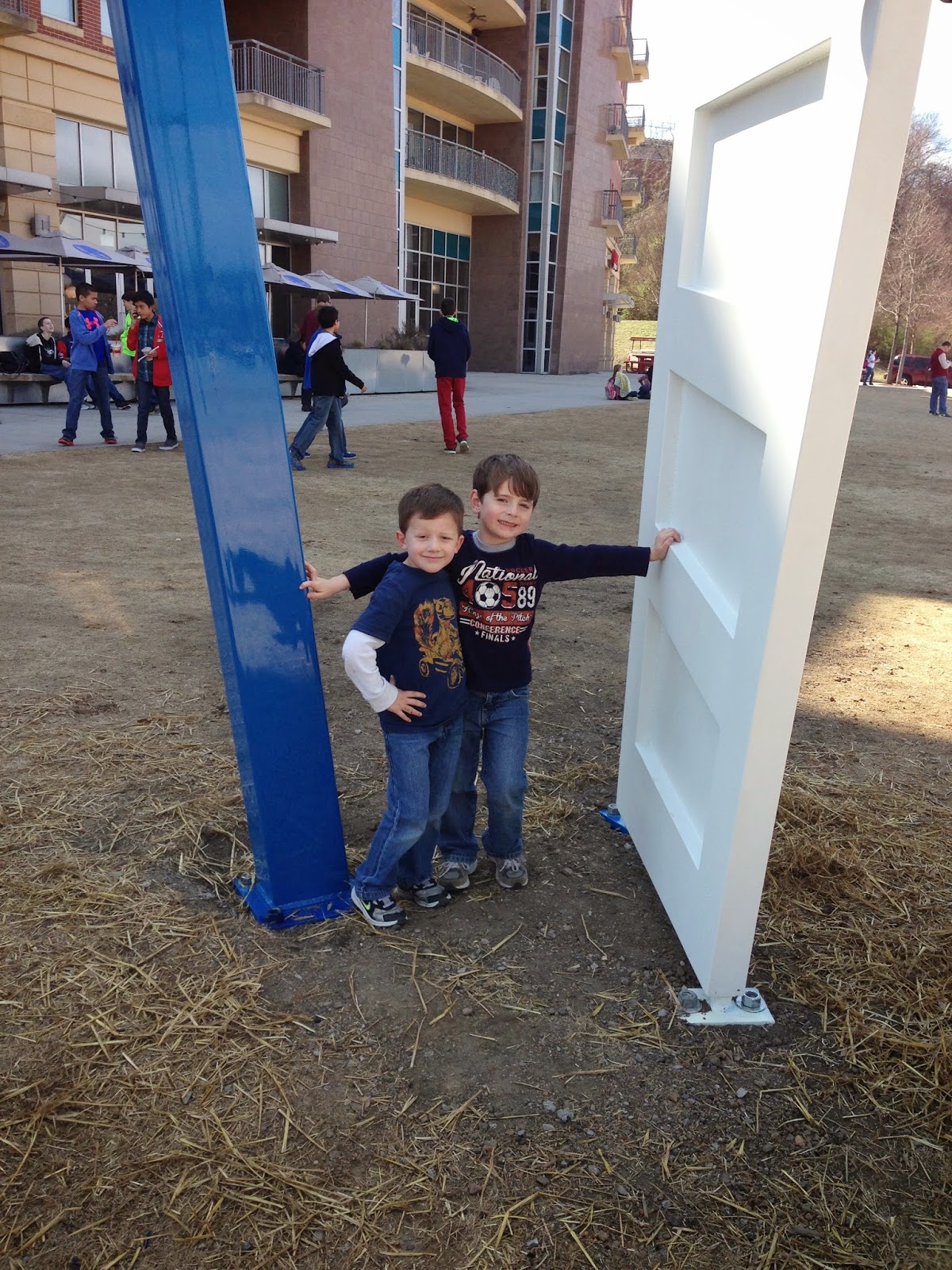 Friday night I got to catch up with some of my favorite Atlanta girl friends: Carrey (one day over due when this was taken!), Maress, Chantal, Me, Monica, Claire and Amy. It was so fun to chat and laugh with these ladies. 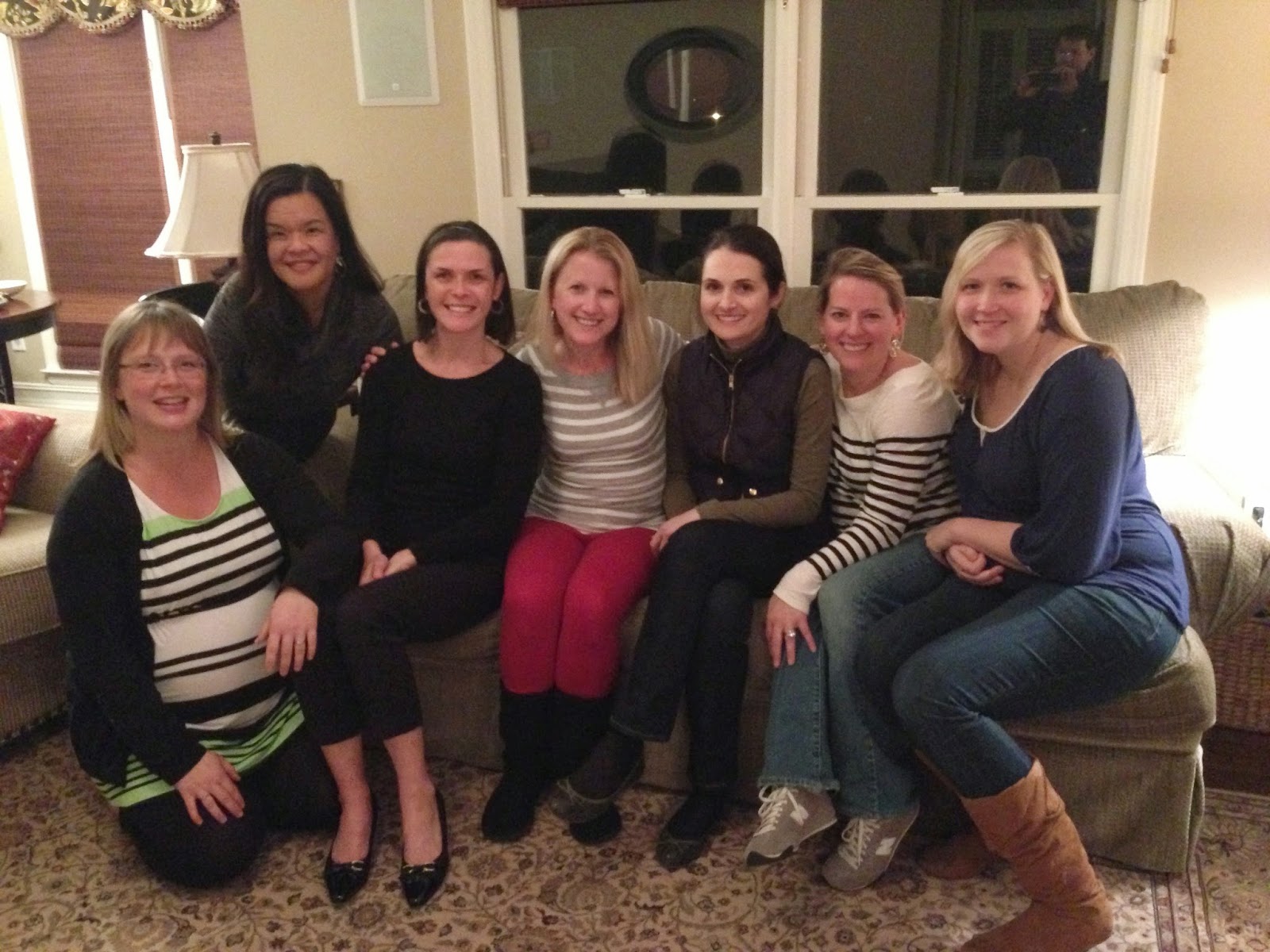 On Saturday Leo and John were so brave and tough as they climbed Stone Mountain! 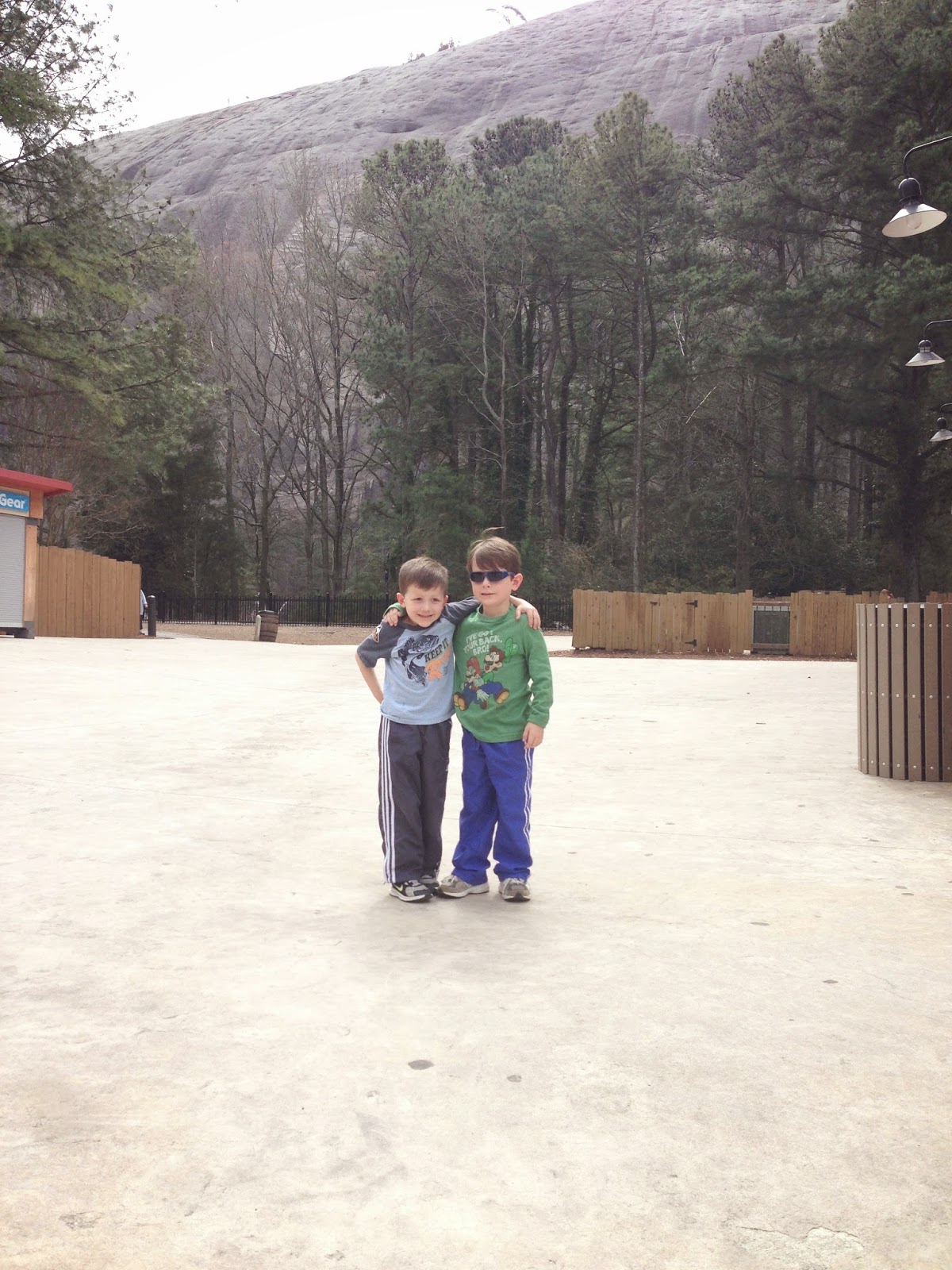 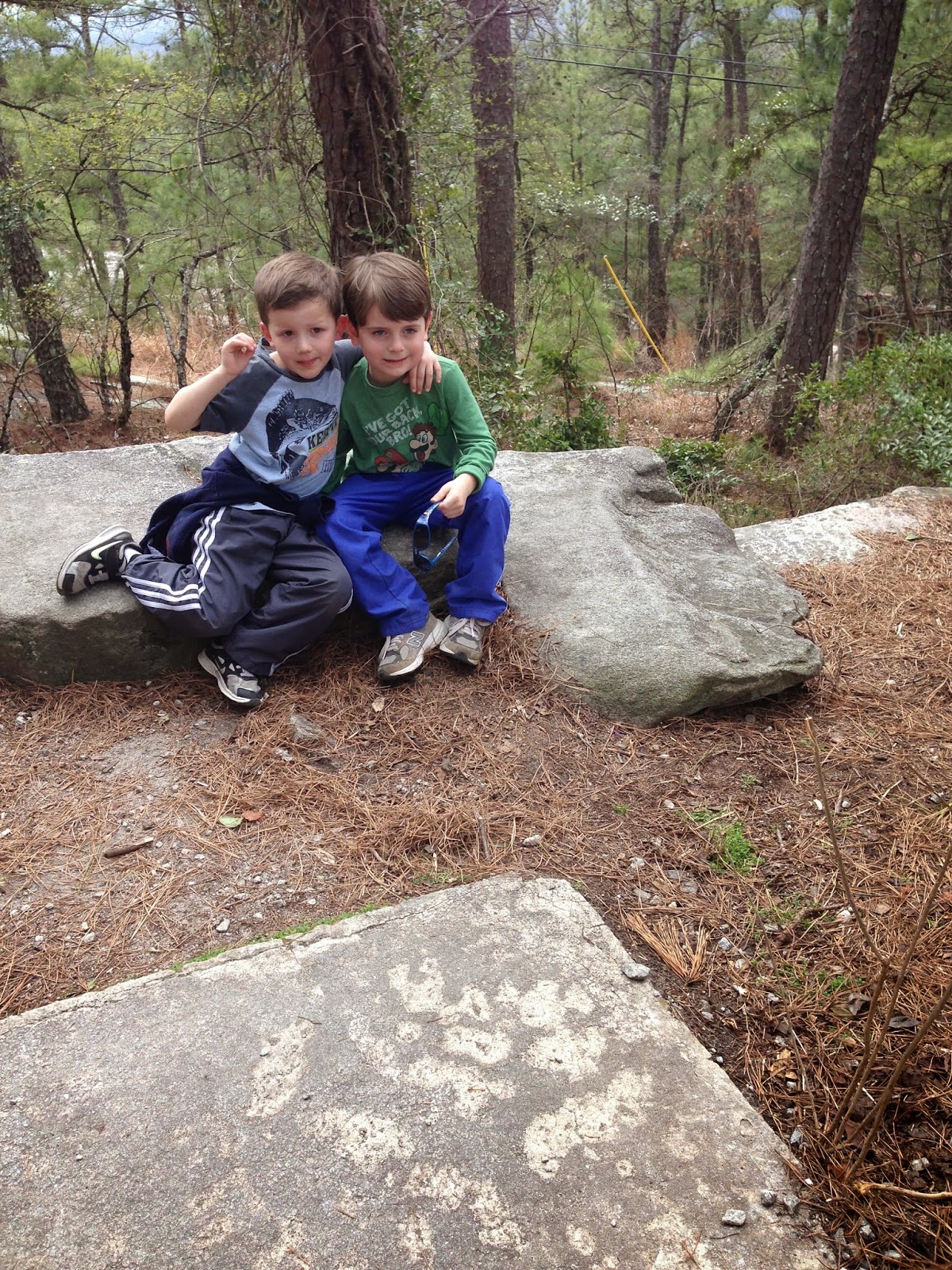 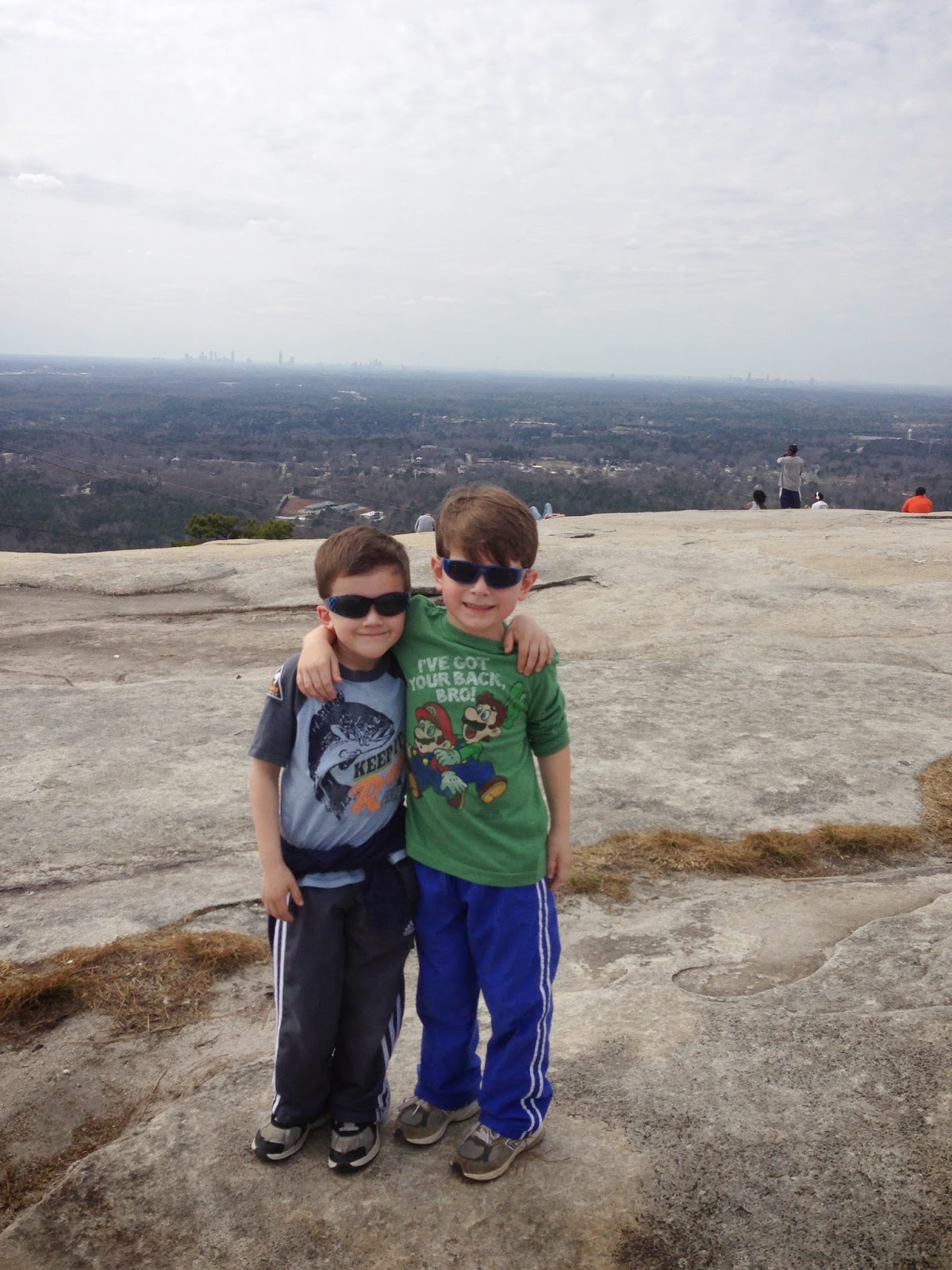 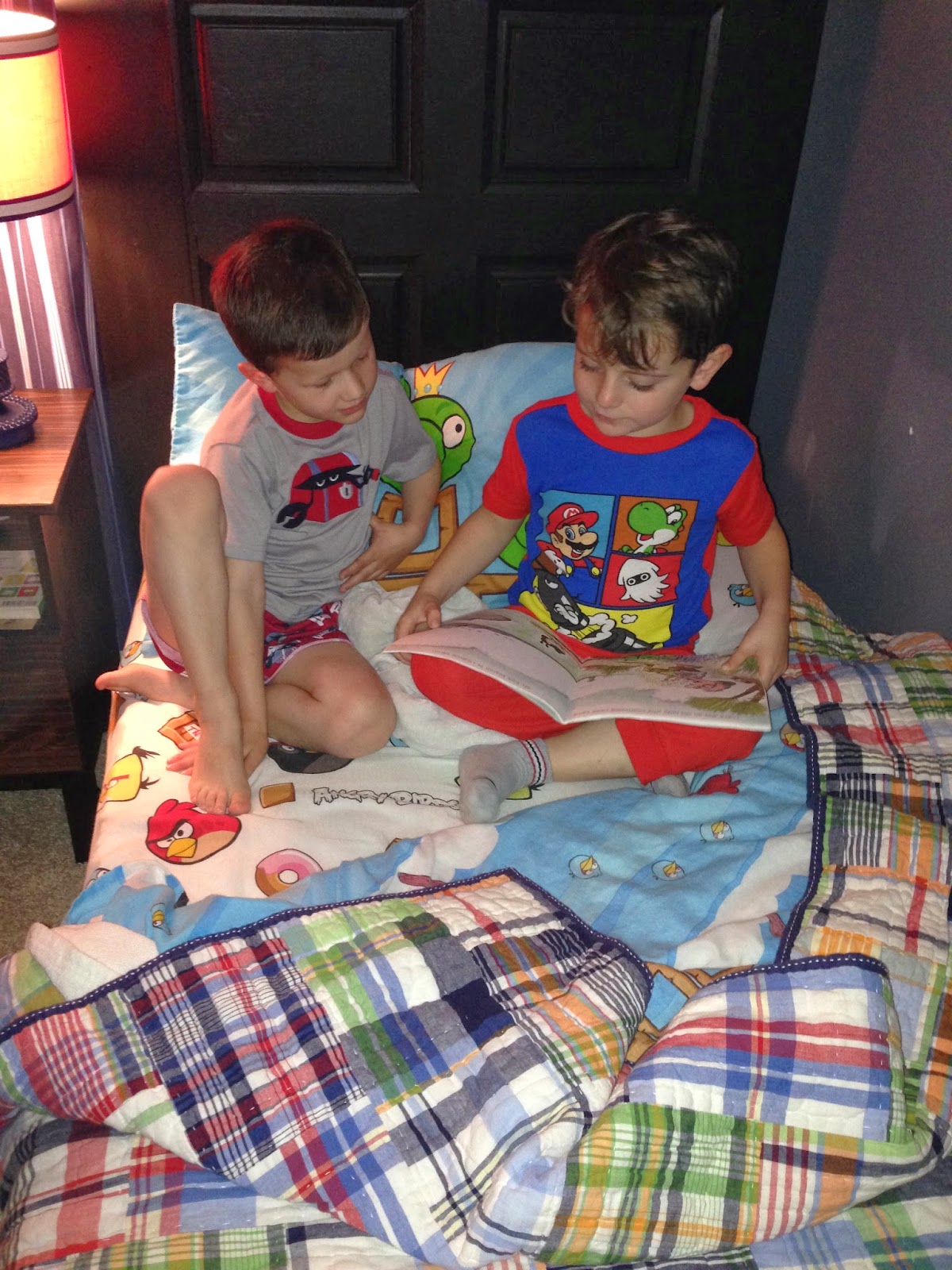 This trip was our last time to stay at John's house in our old neighborhood. They are moving at the end of April to another house in the area. "How will we know where their new house is?" Leo asked. "Hopefully they will give us the address," I told him. I think we are good enough friends for that!
Posted by Writinggal at 3:07 PM 2 comments:

Leo started asking me questions today and I didn't turn the camera on until it got funny. So we had to go back and redo some of the prior questions. He says it's a game he made up where I have to answer his questions with ten seconds or else…I forgot what happens but he seemed to be keeping score.

Listen for my favorite question about which type of bread I prefer. That one is a keeper.

It cuts off at the end because I ran out of storage. But consider yourself lucky. The game started to take a strange turn.

And speaking of strange things... 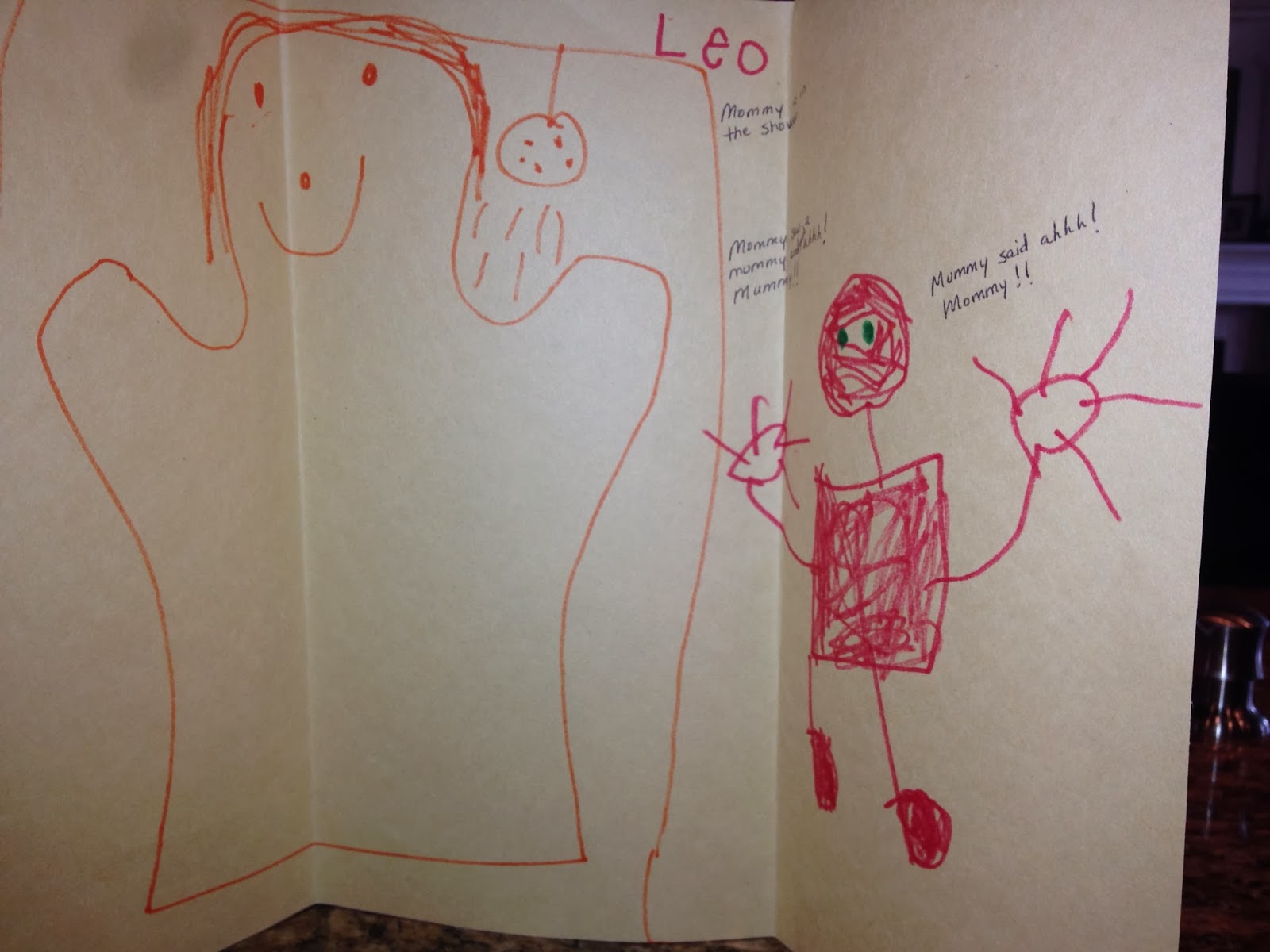 Leo had "free art" at school today and he drew a picture of me IN THE SHOWER. I am grateful he--although very talented for a five year old--is not an advanced artist. I'm happy to just be a blob in this case.  If you can't read the words (that Leo had his teacher write for him), here you go: