Leo and I are both very good liars actors and we fooled Gus and Frank who are both quite gullible trusting.

Leo named himself the raffle boss of the family and spent most of the evening lurking around either the door prizes or the DJ who announced the winners. He felt confident in his strategy--to choose just a few prizes and put a lot of tickets in each.

Early in the night Leo won a Stars and Strikes gift card for six people to bowl and have a pitcher of beer soft drinks. 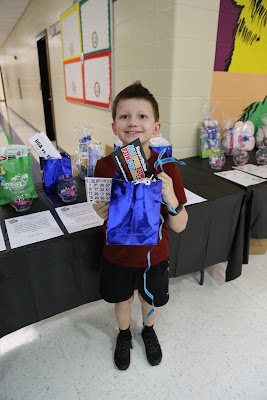 As if that wasn't exciting enough, Leo still felt hopeful that one of the other prizes would go in his favor.

With their Bingo cards depleted, Frank and Gus hitched a ride home with another family while Leo and I stayed behind to see if he would be a double winner.

And he was!! He won two tickets to a UGA game (that is University of Georgia for my Texas readers) this fall! We had to run out of there for fear we would be attacked by jealous bulldawg fans. 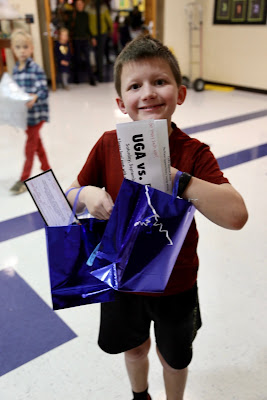 On the way home we concocted a story because we are quite the liars storytellers. Let me preface this by saying Gus hates soup. Thinks it is gross.

Scene: Leo and I arrive at home.

Leo: Nah. But we did win something else. Not as good as that.

Frank: What did we win?

Leo: Free soup for a year.

Elsa: There is this new place opening called "Souper" and Leo thought it meant like "Super Hero" so that's why he put a ticket in there. But really, it's a soup place.

Frank: Wow. So we can get free soup for a year?? That's pretty cool!

Elsa: Well, it's all vegetarian soup like broccoli cheese and tomato.

Frank: How does it work? Can any of us go get it? Whose name is it under?

Elsa: Yeah, anyone in the Simcik family.

Finally, after several more questions from Frank and disgusted noises from Gus, Leo revealed that we had indeed won the coveted UGA tickets!!! Gus was excited and eagerly put on his Georgia gear to pose for a pic. 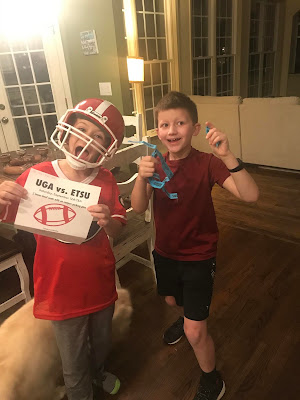 After all the celebrating and rejoicing Frank said, "I can't believe it!! We won Stars and Strikes, the UGA tickets and FREE SOUP FOR A YEAR!!"

Oh dear. I told you he was gullible trusting. #blesshisheart