Last night I did a radio interview with Dr. Fitness and the Fat Guy and the first thing they asked me about was my blog and Frank. “What’s Fabio doing in your pictures?” (referring to pics from our hike) and “How big is his chest?” This confirmed Frank’s theory that he is the “favorite supporting character on the blog.” I suppose I need to give the people what they want so here’s what Mr.Frank-Fix-It's been up to lately:

This weekend he went on a fixing, building and refinishing spree with all sorts of household projects.

He spent Saturday building these shelves for our garage: 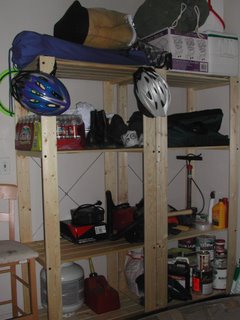 We got them at Ikea so it’s not like he bought lumber and designed them but still…it was quite a project. My favorite part? Ikea's $.50 hot dogs.


He spent Sunday afternoon cleaning our hardwood floors with the new “Flip-It” floor cleaning device. I sat on the couch and lifted up my feet while Frank made the floors look like this: 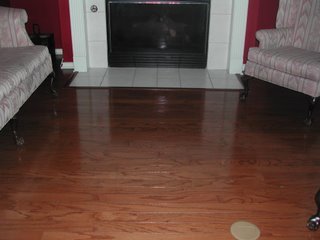 Later that afternoon he did the biggest job of all: finally fixed our master bathroom toilet. It’s been running since we moved in. He bought some part at Home Depot and was in there getting grease and toilet water all over him. I laid on the bed watching Real World reruns (that Paula is such a freak, isn't she?) 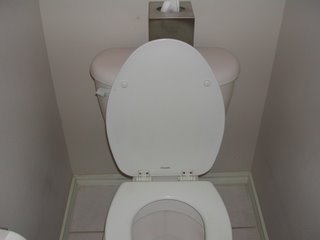 He may be your favorite supporting character but trust me, you don’t want him having any authority in the kitchen. He totally abuses our dish draining device. Instead of letting things dry for a little while and eventually putting them back in the cabinets, he just keeps piling dishes on top of other dishes and look what happens: 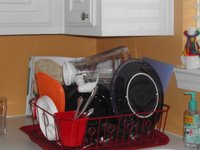 Ah! But I guess a girl who's married to Fabio really shouldn't complain. 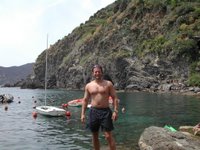 Posted by Writinggal at 8:38 AM

wow! To think that I live across the street (in a quiet little cul de sac) from all this excitement and never hear a peep. Well, every once in awhile we hear the patio stereo system when they crank it full blast. :)

Yes, we are the rock stars of lower Granbury!

All the girls at work will be jealous that my brother-in-law is Fabio!!

We actually met because I was writing a Harlequin romance novel and he was on the cover.