Is it just me, or do you also have this recurring nightmare?

I’m in third grade. I miss a day of school due to illness. I go back to school the next day and all of a sudden, everybody in my class stands up on their desks and breaks into a dance. They all learned the moves the day I was out. The moves are complex, much more sophisticated than nine-year-olds should know how to do. Yet they’re all doing them perfectly. All I can do is try to keep up. But I can’t. I dance my best but I’m still the girl who missed that one day of school and didn’t learn the routine.

Then I wake up in a cold sweat, relieved it was all just a dream.

Last week, however, that dream became a reality.

I was stoked about attending a class at Tracy Anderson’s studio in NYC, given by Tracy herself. I got one of the coveted spots in the class because I was covering it for Workout of the Week. Tracy’s people warned me that the cardio portion would be challenging. They said I might just have to stand back and watch.

Me? Stand back and watch? They obviously didn’t know who they were dealing with! I mean, I work out a lot. I even take Zumba.

It was kind of like if you randomly followed a pro basketball dance team out onto the court at halftime and were expected to perform with them. Imagine what that would look like:

Sexy, rhythmically-gifted women are doing fast-paced, complex choreography and you’re there in the back, trying to look like you belong. They turn, then you turn the other way. They leap across the room. You leap across two seconds later. They bend down in unison. You bend down one beat after.

That’s what I looked like!! It was totally like “which of these kids is doing her own thing” from Sesame Street.

Then why isn’t anyone there with me now? I expected there to be some, even one, dance-dork with me! I mean, I can always count on a few uncoordinated goofs in Zumba class (having the time of their lives, by the way).

But this time, I was the only goof. And actually, I had a great time too. I mean, I was getting an awesome workout from an amazing instructor and I would probably never see these people again.

And unlike my nightmare about third grade, the people in this class didn’t make fun of me or laugh at me. At least not to my face. 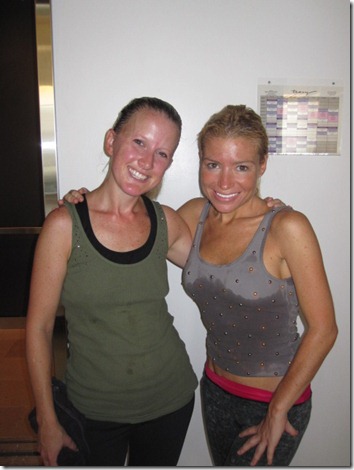 Posted by Writinggal at 9:42 PM

I didn't even put together who Tracy Anderson was until Kate just emailed me and said it... she and her friend do her arm and ab workout videos all the time. We even now use her arm video moves as dance moves!! Ha. Awesome.

I think it is awesome you were brave enough to go!
I am so excited you went, and we can all live vicariously through you to see how the rich and famous work out!
My dream is to have the money and time to do different types of exercise classes, and buy cute workout clothes from Betty Sport!