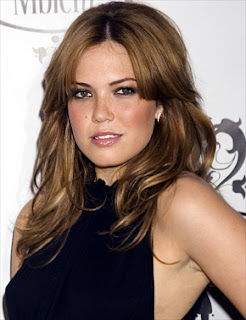 This weekend was like a Mandy Moore-a-thon for me. I watched the movie “Because I said so” one and a half times (once by myself and then half of it with Frank). I read an interview with Ms. Moore in In Style and then I watched this show on Oxygen called “I am Mandy Moore” which was a documentary about her grueling promotional schedule. It was sort of like MTV’s “Diary” but without the “You think you know but you have no idea” line that I like so much.

Anyway, after all that Mandy Moore mayhem, I decided something: I really like Mandy Moore. I wasn’t sure exactly where to channel my feelings though. It wasn’t like a fascination, like I have with SJP. And it wasn’t a girl crush, like I have with Brooke Burke. It was more like what I have with Jen. And Kelly Ripa. I want to be Mandy Moore’s friend. Yet I know it can never be.

That’s why she’s my friendtasy.

So sure am I that Mandy and I would make awesome BFFs, I’m willing to overlook two rules I normally institute when choosing friends:

1. Don’t be friends with someone whose name is the same as another friend. (I’ve already overlooked this rule for a couple of Amys and Kristins.) I already have a friend named Mandy. Sure, I could give up that Mandy but then I’d have to give up cookies. So in this case, I would keep both Mandys and call Mandy Moore “young Mandy” or “famous Mandy” or “Mandy who can get me into clubs and buys me expensive presents.”

2. Don’t be friends with tall people. Mandy is 5 feet 10. That’s like Amazon tall. It hurts my neck just thinking about it.

Mandy’s friendship will be worth it though. She’s charming. She’s funny. But she’s totally flawed. Like she’s probably one of those tall people who trips a lot. Oh, how Mandy and I would laugh!

I mean, we probably wouldn’t see each other much since she’s busy and we don’t live in the same city. And we can’t even share clothes and shoes, which is more of a bummer for me than for her. Although Mandy does like flip flops from the 1 spot at Target and clothes from Ross. At least she does in my friendtasy.
Posted by Writinggal at 1:06 PM

MM does seem like she would be a great friend!
My current friendtasy would be "Lo" on "The Hills".
I mean the girl bought Fruity Pebbles, how fun is that?

I love Lo too! "What's up with Justin/Bobby?"

I love Lo, as well!! JustinBobby has got to go.

I had no idea Mandy was so TALL! I think I'd want her to be my friend in LA who just visits now and then, because I know I'd feel pressured to wear really tall heels around her and my feet can only handle so much.

Justin Bobby is a blog topic in itself!

you are right Thea, MM might be too tall to be my friend. I already have met my tall friend quota!

I would like to be known as the "young Mandy" if you don't mind. Also, my maiden name was McFall, so technically you could call me MM also. Deal? (I know I'm only 5'1" but I can wear heels.)

How 'bout we call you "Watermelon Thump Princess Mandy?"