Frank always ate these elaborate meals but he wasn't as enthused as I was. He'd ask, "Do you really think it's worth it? All the time you spend making it and cleaning it up?" I'd say emphatically that yes, it was worth it. Awesome breakfasts on the weekend are what life is all about. No more boring cereal or Pop Tarts. No, on the weekend we eat eggs and drink orange juice out of champagne glasses!

But somewhere along the way I stopped making fun weekend breakfasts. I don't know whether to blame the two little people who live here now or my stomach's issue with eggs. But Frank, who had been just short of opposed to the whole idea, now loves to make special breakfasts on the weekends. He has one recipe: Cinnamon French Toast.

He gets out the griddle, the bread, the eggs, the cinnamon and he gets to work. Oh, how good it smells! Oh, what a mess he makes! But it's all worth it, right? Because the whole family gets to gather around and enjoy the wonderful creation that is Frank's French Toast.

Here's how it really goes: Frank makes French toast and HE eats all of it. The kids don't actually like French Toast (except for Elmo's frozen French Toast sticks) and I shy away from it because of the eggs. So while Frank is enjoying his warm, delicious French toast we're all having a regular weekday breakfast: cereal, frozen pancakes, etc.

It gets worse. Frank not only makes this elaborate meal just for himself; he doesn't clean it up! So that griddle sits out on the counter pretty much all weekend, just taking up space with all its French Toast droppings.

Neither one of us will give in on the cleaning: me, because I'm trying to prove a point and Frank because he just doesn't care. Now if he would use the griddle to make pancakes, something the whole family can enjoy, I would gladly clean it up. Well, not gladly.

Anyway, that's really the whole story. Frank makes French toast every weekend (sometimes Saturday AND Sunday and why not? The griddle is still out there!) and he eats it and we don't.

One day I will be in charge of weekend breakfasts again and it will go back to OJ in champagne glasses and Christian Rock on the stereo. Maybe when the kids are old enough to help clean up the mess.
Posted by Writinggal at 10:10 PM No comments:

Life with a Butler

I now know what it's like to have my very own butler.  Mine's name is AP. That's short for Amazon Prime. The good people at Amazon are going to be sorry they ever offered their Prime membership to the likes of me. For $80 a year a member can enjoy one benefit: two-day free shipping.

If I wanted to order something online, I would try to spend enough so I could get free shipping. "I need to find something that costs $6. How about a toothbrush? No, dammit! Those are only $2. Should I get three? Is that frivolous? Or maybe I should buy that Charlie Brown piggy bank for $7.50. If only it weren't $1.50 over what I need to spend. Oh, this is so complicated!!"

Life after Amazon Prime:
We're almost out of soap, you say? We have enough to get us through the next two days? Well I don't think I'll get to the store before that so let me just have AP send us over some more. It will show up at our door in two days. Perfect.

It seems I’ve run out of contact lens solution. Hey, AP! Can I have it by Friday? Sure! And you know what? Could you throw in some of those tall brown boots while you’re at it? You know the ones that look like I live in a ski resort town? Thanks.

Packages arrive from AP and the items within them are quite the potpourri: a children’s book for a baby shower, some headphones for the kids’ DVD player, a floral queen sheet set and some multi-vitamins.

My father-in-law was visiting and he said, “You sure have a lot of Amazon boxes!”

Now, don’t start thinking I’ve gone all hoarder on you though. I am simply ordering things online that I would normally run out to the store to procure.  It’s just that with AP at my fingertips, it’s all so pleasant and dare I say luxurious? Just like life with a butler. Except I don’t have someone in a formal uniform lingering around, forcing me to make awkward chit chat. And instead of getting something when I snap my fingers, I get it when I click my mouse. And of course, rather than getting it immediately, I get it in two days. But hey, for $80 a year, (versus whatever the going rate is for a butler), I can wait two days.

I’m also excited about my subscription for toilet paper and paper towels courtesy of AP. Every month I get a shipment of each right at my door step so I don’t have to haul them home from CostCo. I estimated accurately on the toilet paper but I’m currently buried in paper towels. Might have to tell my butler to adjust that.

What with all this VIP service a girl could get a little big-headed or even snooty. But since AP doesn't ship wine or pour it for me, I'm sure to stay grounded. I'll sum up with a little song I'm working on about my new status as a lady with a butler:

Don't be fooled by all the boxes that I got, I'm still, I'm still Elsa from the block.

Twas the Night Before the Potty Party...

...and all through the house, not a creature was stirring
(except for Elmo, who was totally psyched about potty training)! 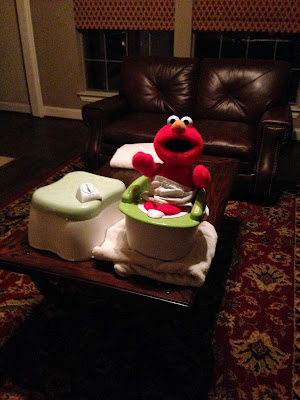 No need to get a "Potty Party" banner; Happy Birthday works just fine unless your two-year-old is a reading genius (or your six-year-old is a late potty trainer). 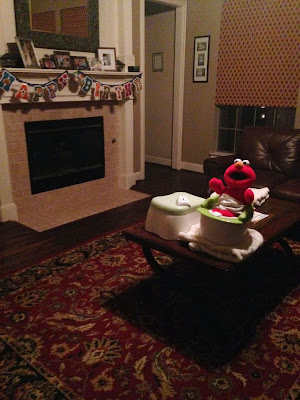 Gus was totally ready to perch upon his throne this morning, as long as his shoo shoo could come along. 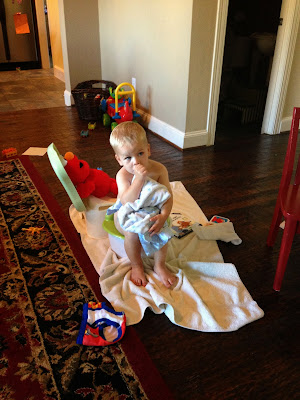 Gus and Elmo on the potty train! Look at all the treats Elmo's earned. 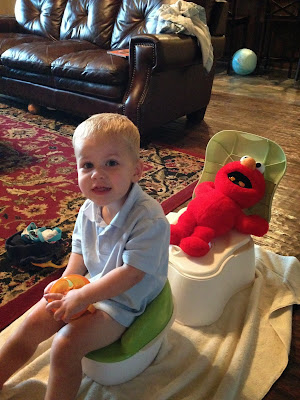 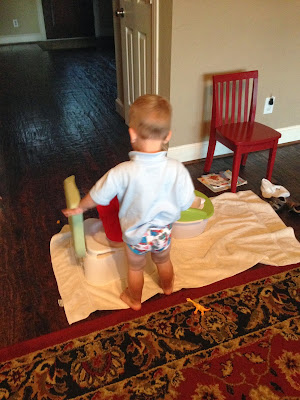 Now, in addition to my giant diaper bag, I also have to carry around this portable potty. If you think it's weird that to see me holding it at a park, you should have seen me chasing Gus through a football practice, with the little potty under my arm. 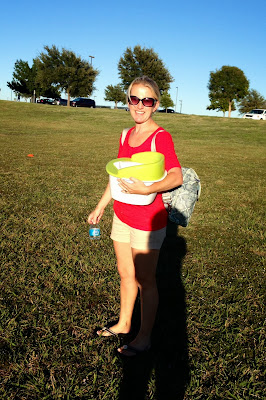 And here are a couple of videos of the start to the potty party. We serve juice boxes, but unfortunately not wine.