We've sort of failed our boys in the biking department (which is weird since, as a spin instructor, I am kinda like a pro biker). We just haven't put enough time and effort into teaching Leo how to ride his bike or Gus how to pedal at all.

Sure, we got the balance bar for Leo so Frank could hold onto the back but we only did that a handful of times. And poor Gus. We just let him ride his trike Flinstone-style most of the time.

But for some reason, Frank decided that yesterday, on a 100-degree afternoon, he wanted to teach Leo how to ride his bike without training wheels or the balance bar. He took him to the elementary school parking lot and did the whole "let go without telling him" trick and it worked. They celebrated at our hang out, RaceTrac.

There was no video evidence so we all went out tonight to see if Leo could replicate his success on the sidewalk (a little trickier terrain than the parking lot). He did great; Frank had to grab the balance bar a few times. And the best part was, when he did fall, he didnt freak out. And to our surprise, Gus decided to steal a little thunder and finally pedal his tricycle!

So without further ado, I give you proof of Leo and Gus' biking milestones:

Very proud of these boys! 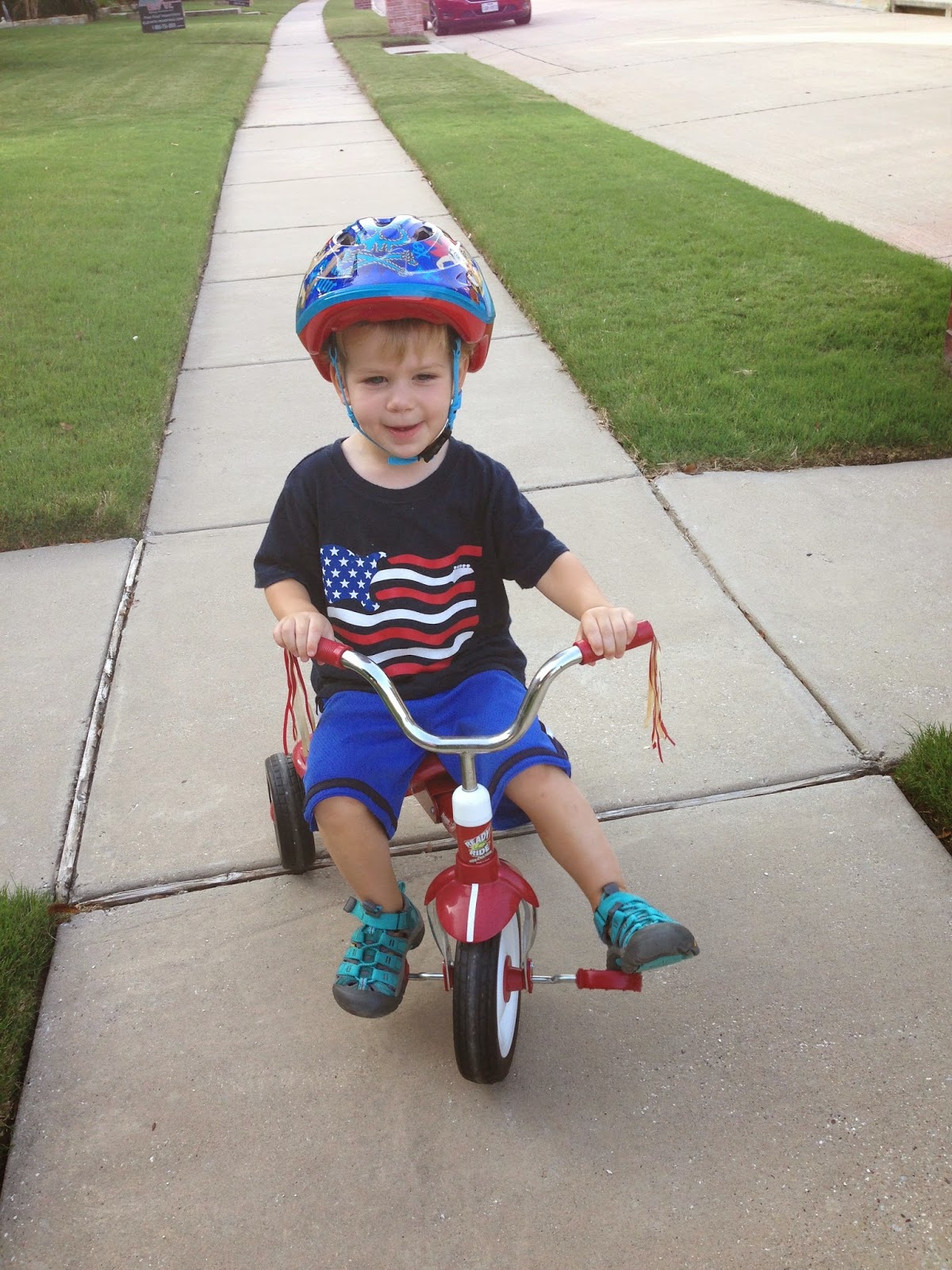 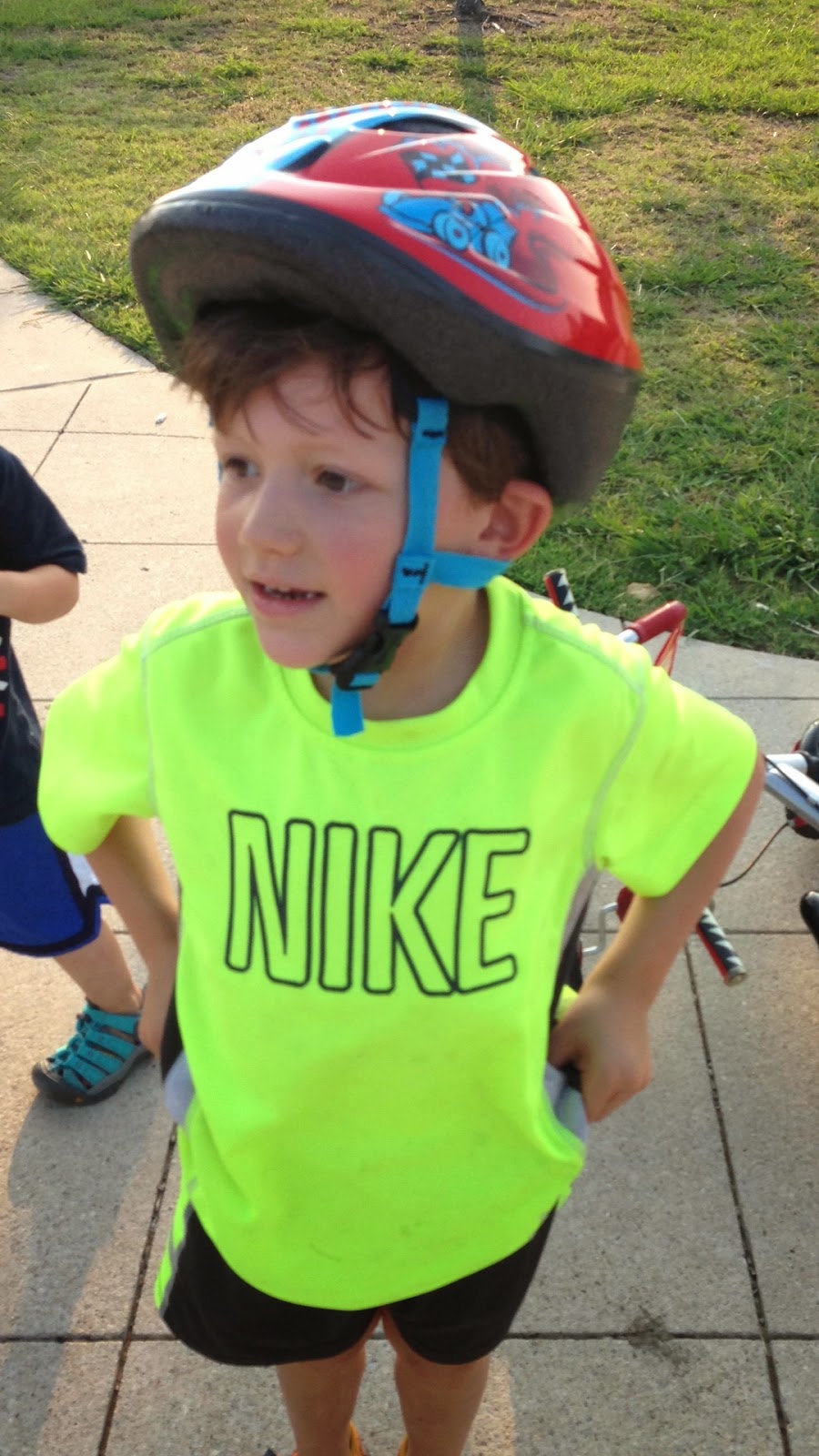 It's not like an emergency situation. Nevertheless, it is a situation. We used to have three shoo shoos. Now we have two. We may or may not have left the third shoo shoo at a car dealership. That wouldn't be so bad if it wasn't "Jerry Durant's in Weatherford, Ten Minutes West of High Prices" which means an hour and a half from our house.

Here are some recent pics of shoo shoo for your reference. We called this moment between Gus and Paloma "Shih Shoo Shoo" 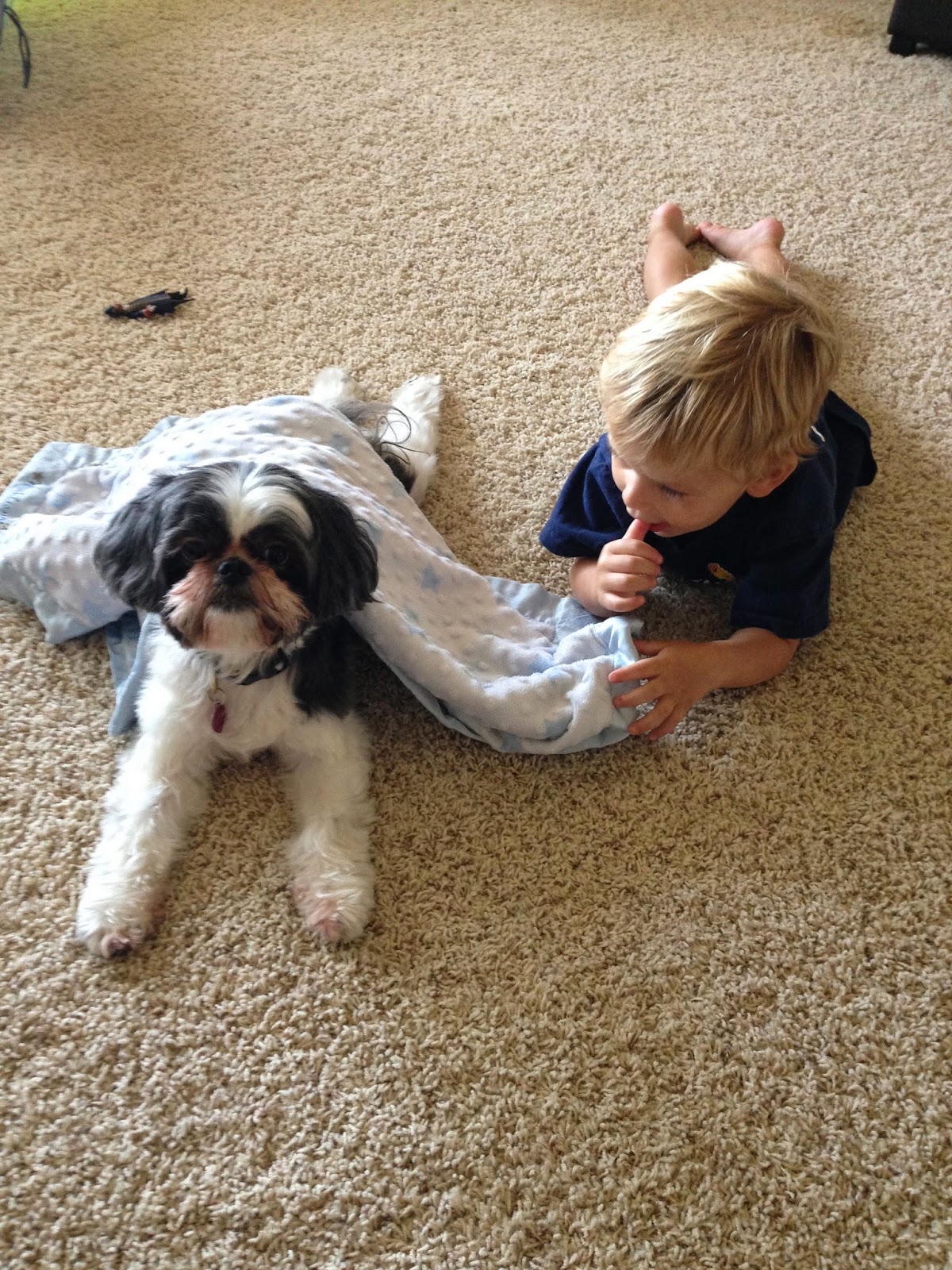 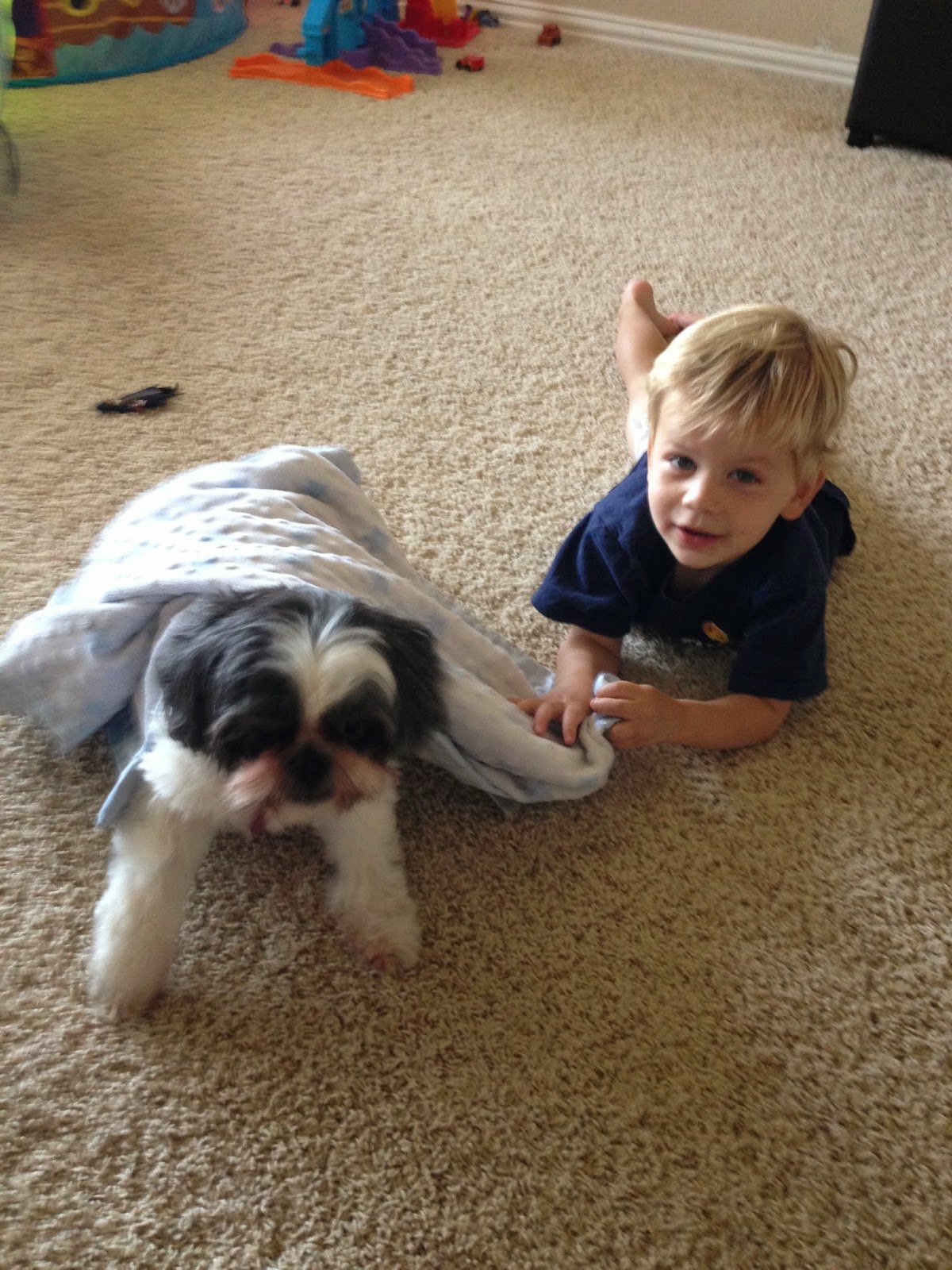 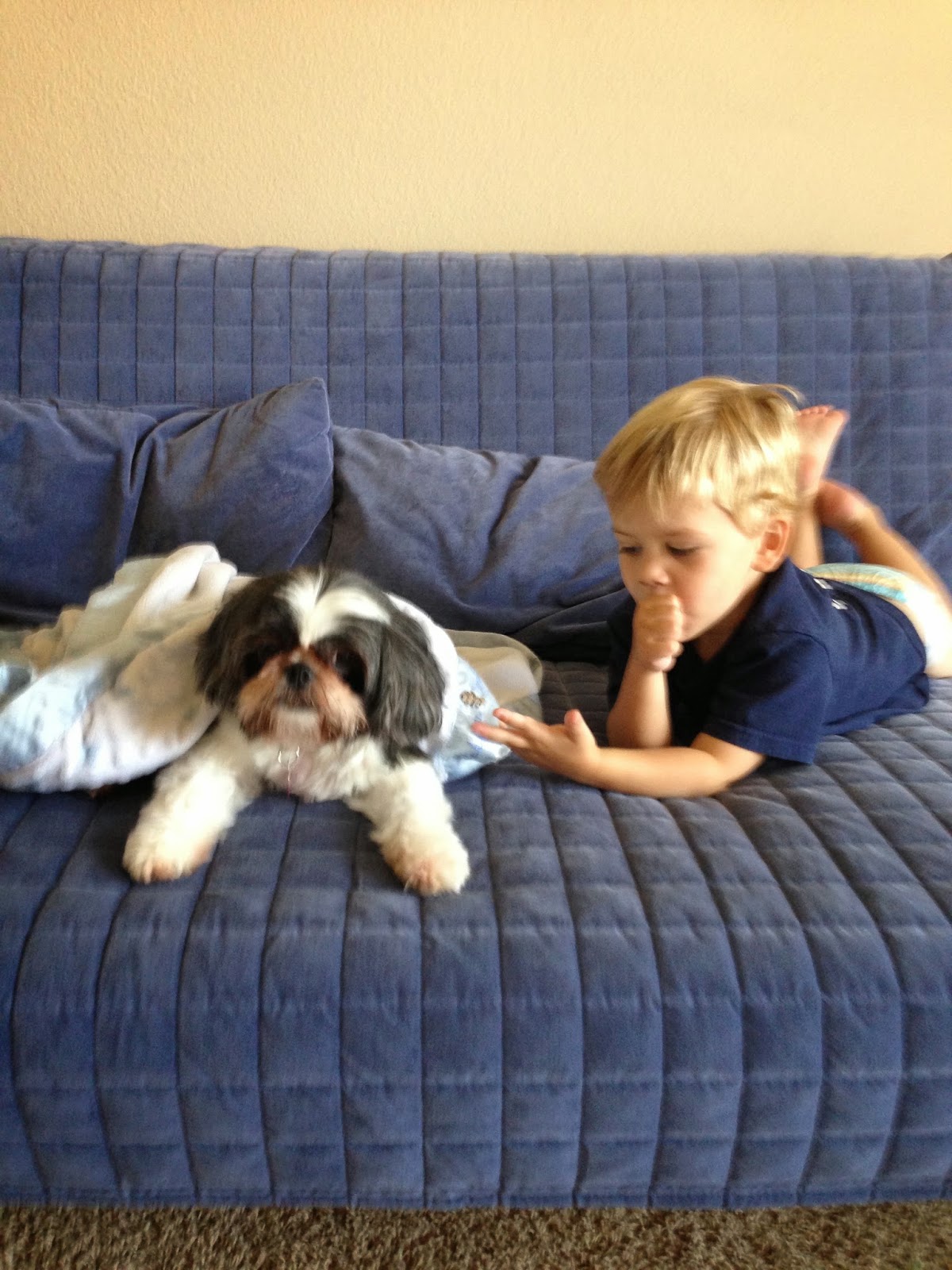 Life with two shoo shoos is complicated. We used to have one for the car (car shoo shoo), one for downstairs (play shoo shoo) and one for his crib (night night shoo shoo). Now I'm shuffling two shoo shoos between the car, downstairs and his crib. So tonight, for instance, we were about to read books before bed and he said, "Where is my shoo shoo?" Well, the one from his crib was now in the laundry after an unfortunate aiming issue in the bathroom. So I had to schlep to the car to get the only alternative. That means tomorrow I have to be vigilant about remembering to grab a shoo shoo before leaving the house.

Like I need something else to remember! I've got a company move tomorrow between the library and make-up swim lessons.

I went ahead and searched online because, really, how are we expected to live in these conditions? But I'm a little worried they don't make shoo shoo anymore. And by "they" I mean "Just One You made by Carter's." This little sub-brand is sold exclusively at Target so if they don't have it, I'm shoo shoo screwed.

I suspect they now make this newer version of shoo shoo: 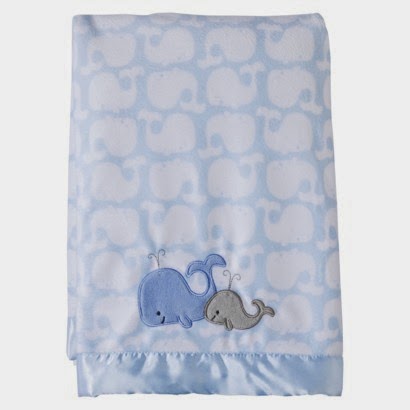 I mean, it has the same look and feel of shoo shoo but instead of stars it has whales. Could he be fooled? Methinks he is too smart.

But wait. As I was searching for images I happened across some shoo shoos on eBay! I think I'm going to bid on one that only has one person at $.99 so far. I've never bought anything on eBay before, but for this, I feel compelled to try. If I have to wait up late at night, right before the auction ends (like I've seen Frank do) and bid way over the amount shoo shoo would ever cost in a store, I will do it! And while I'm at it, I might get two more. It will be nice to have a spare in case this crisis situation ever happens again.

This is a typical conversation lately with what used-to-be my sweeter child. My sis-in-law Laura told me there's a term called "threenager" and it couldn't be more true of Gus. Ever since he turned three, he has been somewhat of a mess.

Now, he wasn't unlike a teenager before. He has a tendency to be lethargic. He loves to sleep in. And when I go in to get him up (Yes, I usually have to wake him up!) he'll say, "No, it's not morning time yet." Same goes for after nap. I totally deserve this, by the way, since Leo was so nap-resistant and has always woken up at 7am or earlier, no matter if he went to a bed at midnight.

Gus also seems a little bit older, not into babyish things…except sucking his thumb and his shoo shoo. But he can totally hang with the big boys.

Now that he is three, he's more than just lazy and cool. He's prone to melt downs and is so stubborn. I honestly used to think he was kind of a pushover (compared to Leo at two). Not anymore.

And he just makes no sense.

Like today, we were in a public restroom and after Gus had done his business I was trying to help him wash his hands (which always sparks drama) and not only did he not want me to help him, he kept insisting, "I don't HAVE to go potty! I don't have to go potty!" And I would say, "You already went potty. Now we are washing your hands" to which he cried and screamed repeatedly, "I don't have to go potty!" Foolishly, I repeated my last explanation to which he became more agitated and repeated HIS argument. Full of frustration I yelled, "Why am I arguing with a three year old?"

When we got home he wanted to go in the backyard to "mow the lawn." He asked me, "Do you think the lawn needs to be mowed?" I said, "Well, the boys did it yesterday but you're welcome to mow it if you want." He asked his question again. I answered again. He became upset and screamed his question. I tried rephrasing. He started to melt down, asking the same question over and over, no matter how I answered. Finally (and might I add that it was way too hot to be in the backyard in the first place), I said, "YES! THE LAWN NEEDS TO BE MOWED!" To which he completely stopped screaming and said, "Okay." I heard him doing the same exchange with Leo a few minutes later so I gave Leo a head's up: "Just say yes."

In the last month I think Gus has had more melt downs than he's had in his three years. And I think his first language is whine. So this is just a preview of what it will be like in the teen years. Except I bet he won't be this cute. 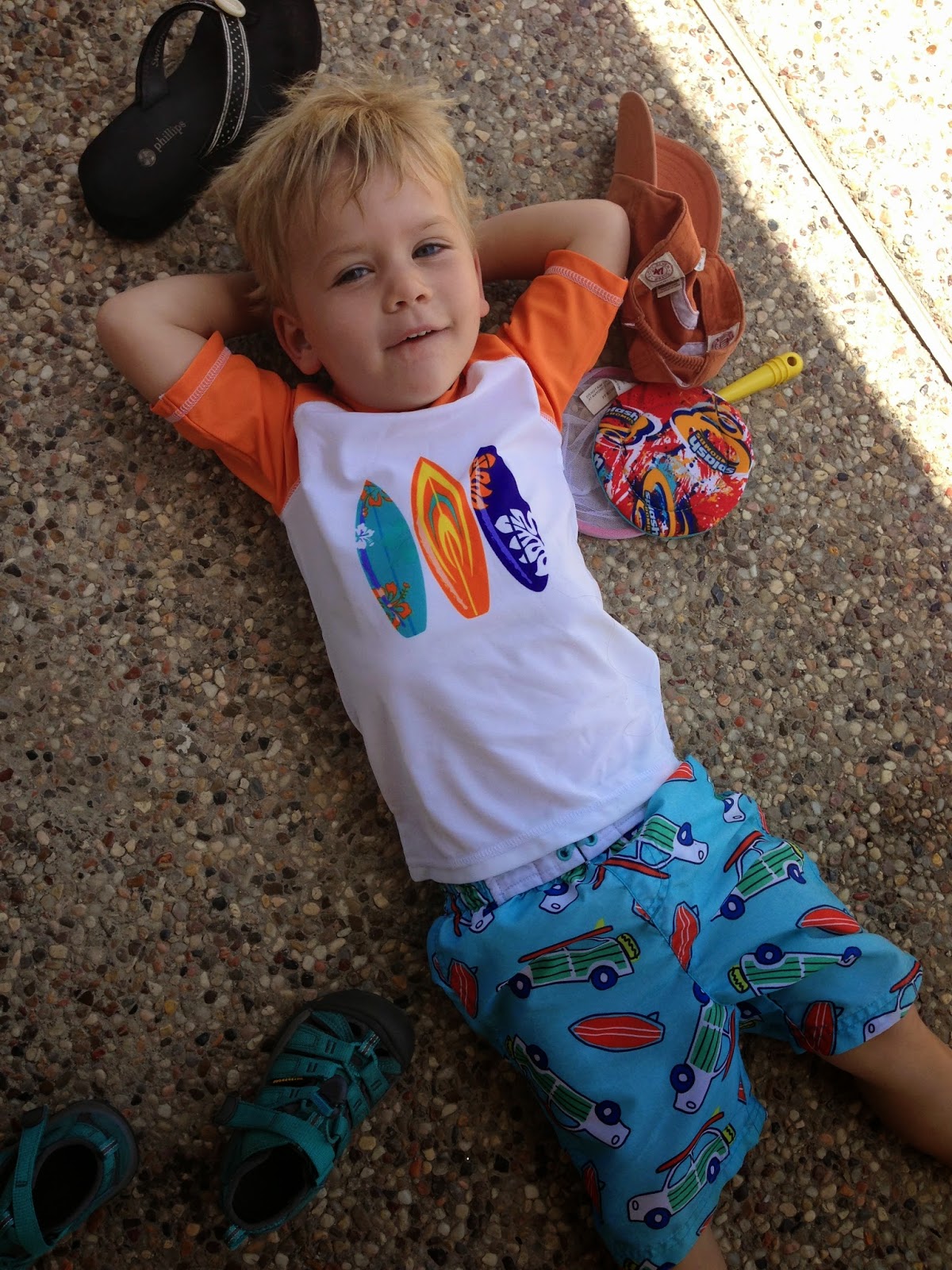