Back in the Saddle

When I posted this blog about Gus learning to ride his bike back in March, I thought that was it. I thought that was the bike riding blog. He learned. He rode. He was a bike rider. I even confidently said "once you learn, you never forget."

But apparently you can forget. Whether it was the long, hot summer or a bad fall down a hill, Gus DID NOT know how to ride his bike anymore. We tried a few times but were unsuccessful. And I'm not exactly up for bending over and holding on while he rides.

Luckily, Frank is. He took him up to the Sweet Apple Elementary parking lot and practiced for a long time two weeks ago. And he got it. Then Frank came home and took off Gus' beloved Balance Buddy and he rode in the cul de sac.

Last weekend we tackled the Greenway (side note: Frank and I always accidentally call it "The Greenbelt" from our Austin days).

He's still a little shaky on down hills but this time I really really think he will never forget! (As long as we keep rolling through the winter!)


Oh, and as I went to post this blog, I saw a draft of a blog that I never posted from October. So, this will be a little dated but bear with me:

Gus had planned to be Luke Skywalker for Halloween. Then one day he mentioned something about a pirate zombie and I stupidly said, "That would be a good Halloween costume." And Gus surprised me by responding with, "What? No! I already have a Halloween costume! And it costed a lot of dollars. Someone would have to be an idiot to buy another costume."

Okay, back to Gus riding his bike :)

He looks like a ten year old riding a toddler bike in this pic!! 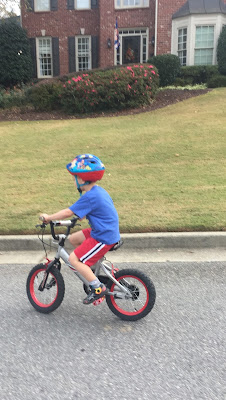 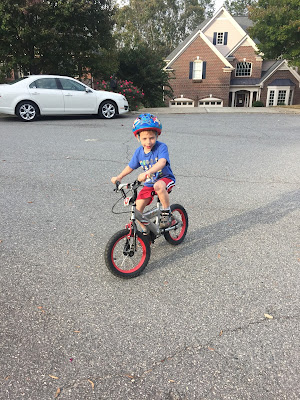 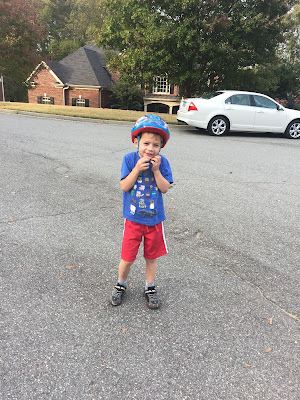