This is yet another tale that takes place at Target. It seems to be the setting of most of my stories.

So I was at Target, buying just a handful of things which quickly turned into a cart full of things. I got home and Frank kindly unloaded the groceries. I was going to sneak off and get a pedicure but just before I walked out the door I said to Frank, "Hey, what did you do with the chicken?" I wanted to make sure he put it in the fridge and not the freezer, since we planned to grill fajitas the next night.

"Chicken? What chicken?" he asked.

Where was the chicken? We checked the obvious places--the fridge, the freezer, the gridge, the greezer…nowhere. Did I leave it in the car? Hurry, time is of the essence! I ran to the car…no chicken. I surmised that I must have left at the store. Referring to my recent mishaps at Target as well as a situation at a Wendy's in Waco in which I left my driver's side door open the entire time we ate, Frank said, "You've been doing this a lot lately." Low blow, dude. But he did have a point. I mean, I completely forgot to take Gus to gymnastics on Monday even though a friend asked me, "Where does Gus take gymnastics? Does he like it?" DURING the time we were supposed to be there! The universe was giving me all kinds of clues!

But back to the chicken. I decided I would go back to Target, replace the chicken (cause they are always nice about that. Yes, this has happened to me before) and then go get my pedicure. So I did just that. Except the pedicure. Cause when I was walking out of Target I realized I can't leave chicken in the car while I get my toes did.

I checked the pantry. My eyes landed on the Halloween candy I had just purchased. It was way up on the top shelf still in a Target bag. I jumped and pulled the bag down. Yep, it was slightly cold. At the bottom of this bag, under the Halloween candy was the cream cheese, the guacamole, and THE CHICKEN! (That's some weird packing, btw.) I took it to Frank and said, "I found this in the pantry. You seem to be doing this a lot lately."

We had a little laugh and quickly agreed to throw out the chicken.

Popsy was here and had been part of the original search team for the chicken. When I told him the story, he said, "It would be a bigger sin to throw away the chicken. It's fine!" And he proceeded to get it out of the trash. Well, I'll admit I was sort of sold on the fact that the chicken was probably fine. But Frank and his mom WERE NOT. They insisted we keep "Popsy's chicken" separate and only Popsy--not Frank, me, Granny Jo, the kids or Thea (our guest for fajitas who is just learning of this by reading this post) would eat the chicken that sat in my car, then in the pantry and then in the trash.

But despite his best efforts to separate Popsy's chicken from the good chicken they inevitably got mixed. In the end we all survived. (Thea? Are you there? Please comment if you are alive.)

So the moral of the story is…if you have plans to go get a pedicure, just go. Don't mention something right before you walk out the door. Especially chicken.

Losing my Cart and Brain Cells at Target

"Ma'am! Ma'am! That's my cart!" A distraught Target customer said to me the other day.

She was right. I was walking away with her cart--with two tops I had picked out and HER PURSE!

Now obviously this was an honest mistake. But was it a logical one?

See, I had done some serious grocery shopping prior to my clothes shopping. My cart was piled high with frozen pancakes and whatnot. So why, when I found two cute Target tops, would I toss them into the first empty cart I saw? And then WALK OFF WITH IT?

As it turns out, my own cart was way down by the juniors section--pancakes defrosting.

While that was my worst cart-stealing offense, it wasn't my first. On that very same shopping trip, I almost stole another cart. I went to put my Starbucks in the kid-seat (cause I was kid-free!) and only after setting down my Pumpkin Spice Latte did I notice some concealer and thought, "Hmmm, I don't remember buying any of that…although I DO need some of that. Damn you, Target, always making me go off-list!"

About a week after the cart-stealing incidents, I went back to the scene of the crime. While shopping (with Gus this time), I saw a friend and shared the story of my prior cart mishaps. She gasped; we laughed. We discussed how I could be in such a fog at Target when I didn't have my kids with me. Maybe I was so elated to be there alone, we surmised?

So then Gus and I went out to the car and found this: 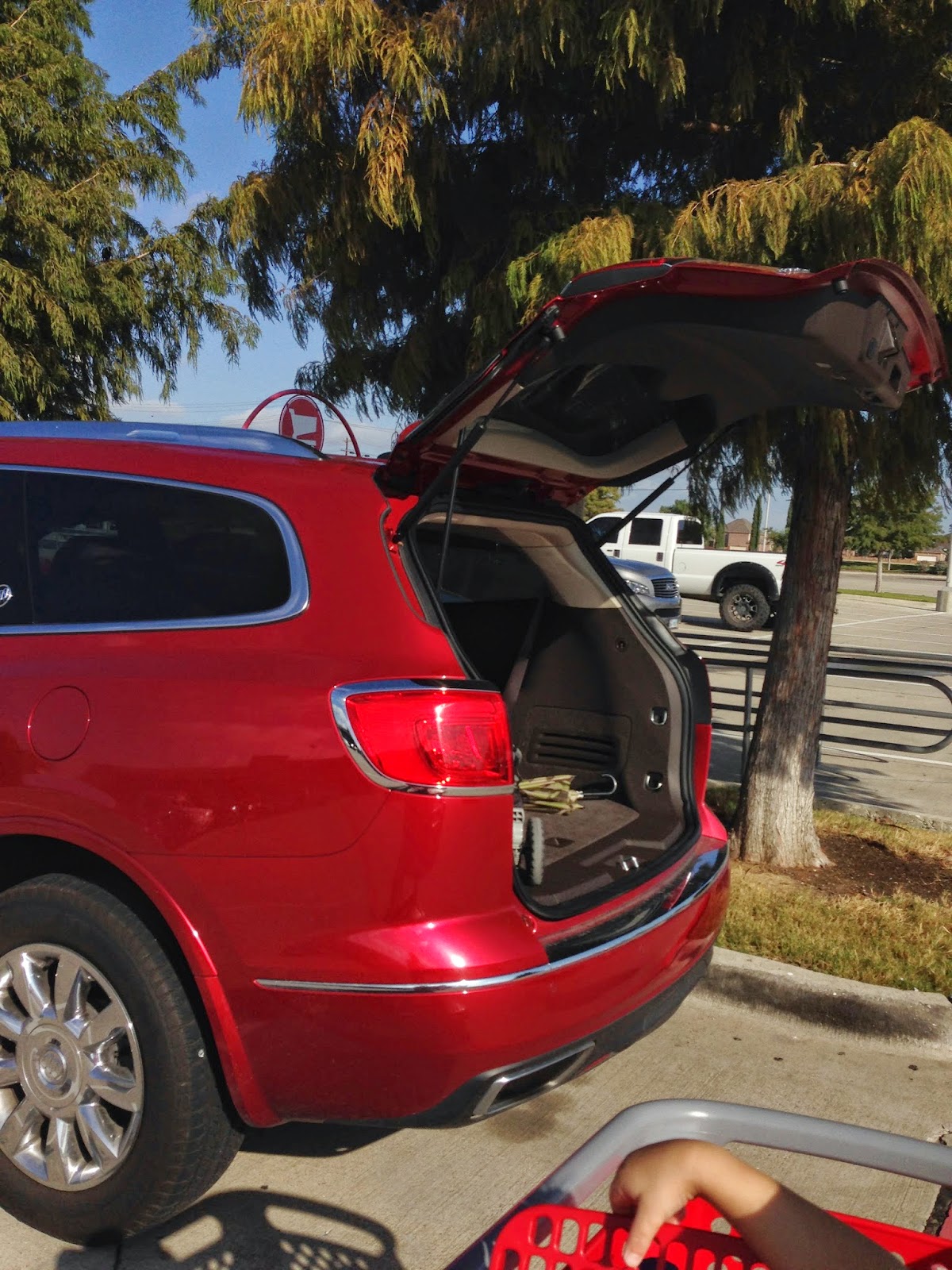 It had been open the whole time we were in Target! I was embarrassed to even approach it. An employee came up and told me they were about to make an announcement. So glad I got out  there before that happened. How would that go? "Attention Target Customers, would the biggest idiot in the store please report to the parking lot? Like if you just stole someone's cart by mistake, you might be who we are looking for."

Of course none of these incidents will prevent me from shopping at my favorite store. But if they kick me out..nah, they would never do that. They would have to close down the store!