It's a bad combination. My kids seem healthy but they are too contagious to go anywhere. Here is how this debacle started:

I lost my voice this weekend. I had no other symptoms though. But by Monday night I did. My throat hurt so bad it felt like it was totally closed up. I also felt really tired and just, you know, sick.

Also on Monday I noticed the kids had these bumps around their mouths. Gus' looked like a bug bite on his chin and Leo's looked like three tiny pimples above his lip. This looked suspicious to me and since I fancy myself a doctor, I diagnosed them with impetigo.

So Tuesday morning we all schlepped to the doctor. What an ordeal this was! I went to Walgreen's, my energetic entourage in tow, to see the doc in the box. I brought along a DVD player but forgot to charge it. So they amused themselves by taking flattering pictures of me during my exam: 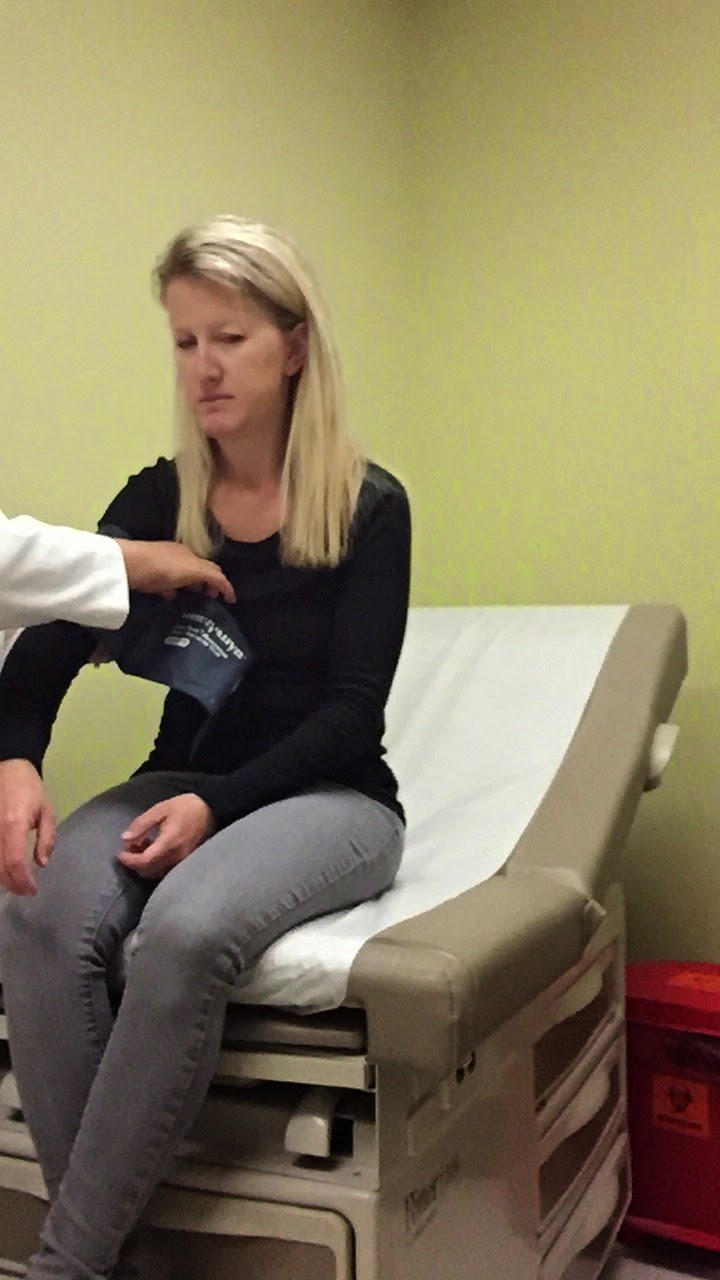 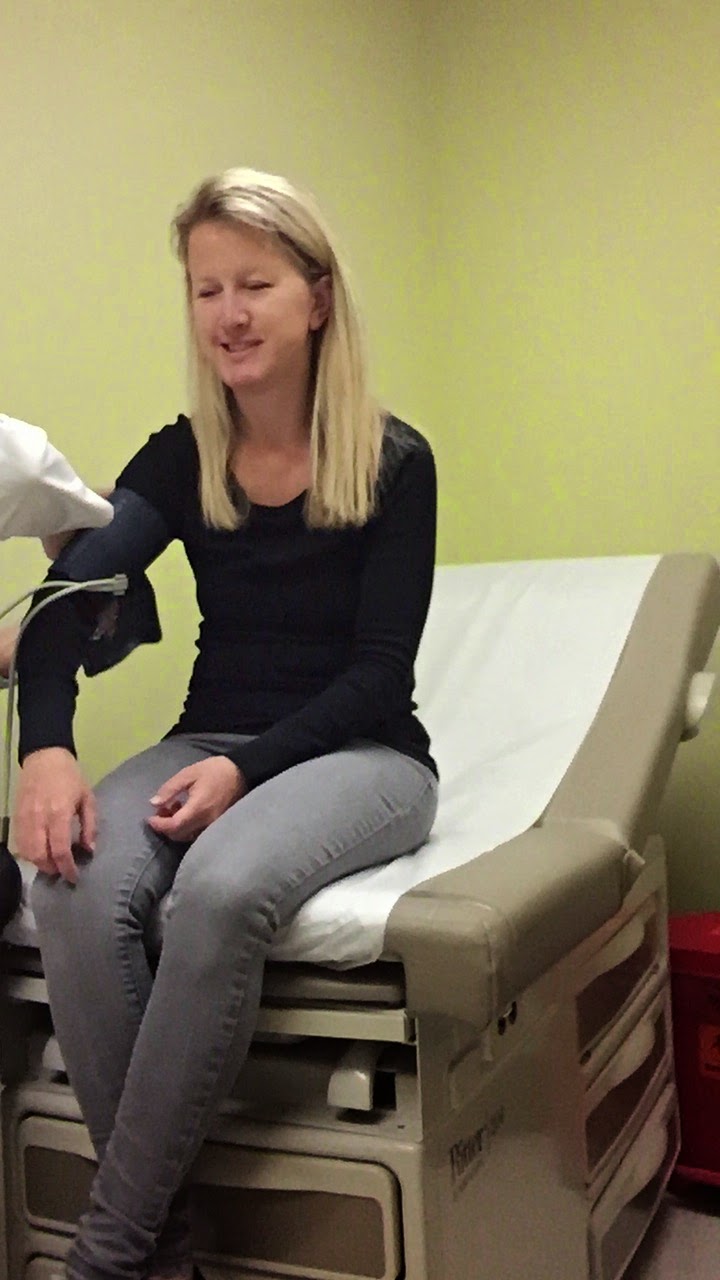 When the doc diagnosed me with strep I wasn't surprised (because I had already diagnosed myself with it) and relieved (because I knew I could get drugs to knock it out). Then we went to the pediatrician where the boys were diagnosed with impetigo (as if I didn't already know).

But the doc also tested them for strep, since I was positive. To my surprise, these perfectly healthy, insanely hyper boys tested positive too. When we were checking out and the boys were bouncing all over the "sick" side of the waiting room, I said to the lady in front of me. "They have strep throat. Can you believe it?" She could not. She could believe that I did because I sounded like a smoking frog.

So we all had strep throat. But I was the only one who felt crappy.

It really is the worst case scenario.

So I couldn't send Leo to school. I couldn't send Gus' to a friend's house. And I couldn't rest because they wanted me at 100% capacity. I even resorted to begging, "Can you guys just please go easy on me? I am really sick!" But no, if they dropped something n the car, they would still scream until I could pull over to pick it up. They weren't letting anything slide.

And they were hungry! Sick kids aren't supposed to be hungry. So I had to make meals and dole out snacks and clean up after them.

I now truly understand the phrase, no rest for the weary.

The doc had told me they had to be out of school Tuesday AND Wednesday since they would have started the antibiotics about 11am and you have to wait 24 hours before sending them back to school. But when I called the doctor's office today to get a note for Leo's school, the nurse said he actually could have gone back today since he didn't have a fever.

But the bumps on his face are in that stage where they look worse before they get better. So I'm afraid he may have been shunned if he went today. Also, he calls the bumps "warts," so I need to set him straight on that before he returns. 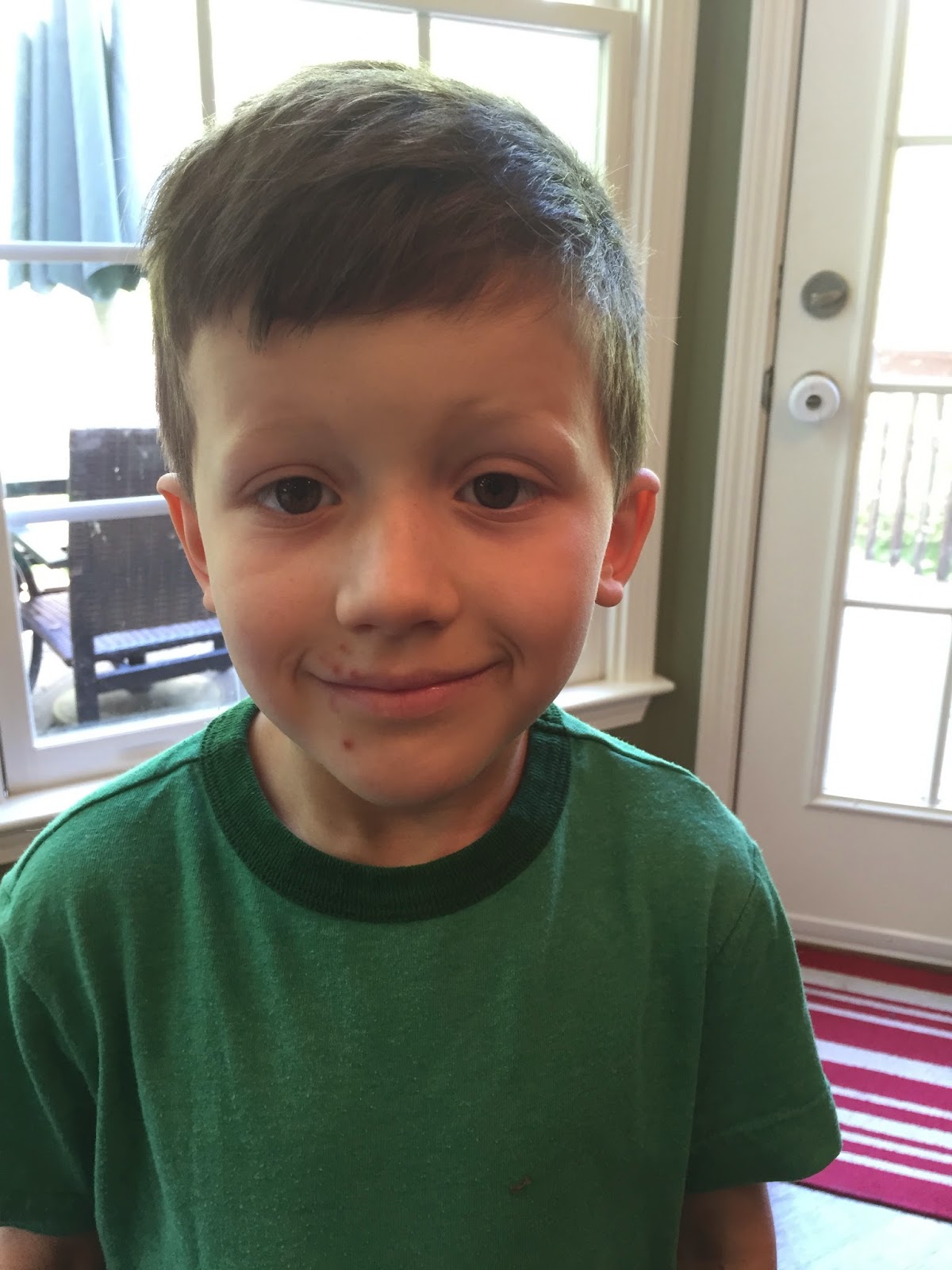 Gus' looks worse than it is because some of it is jelly. It's an occupational hazard. 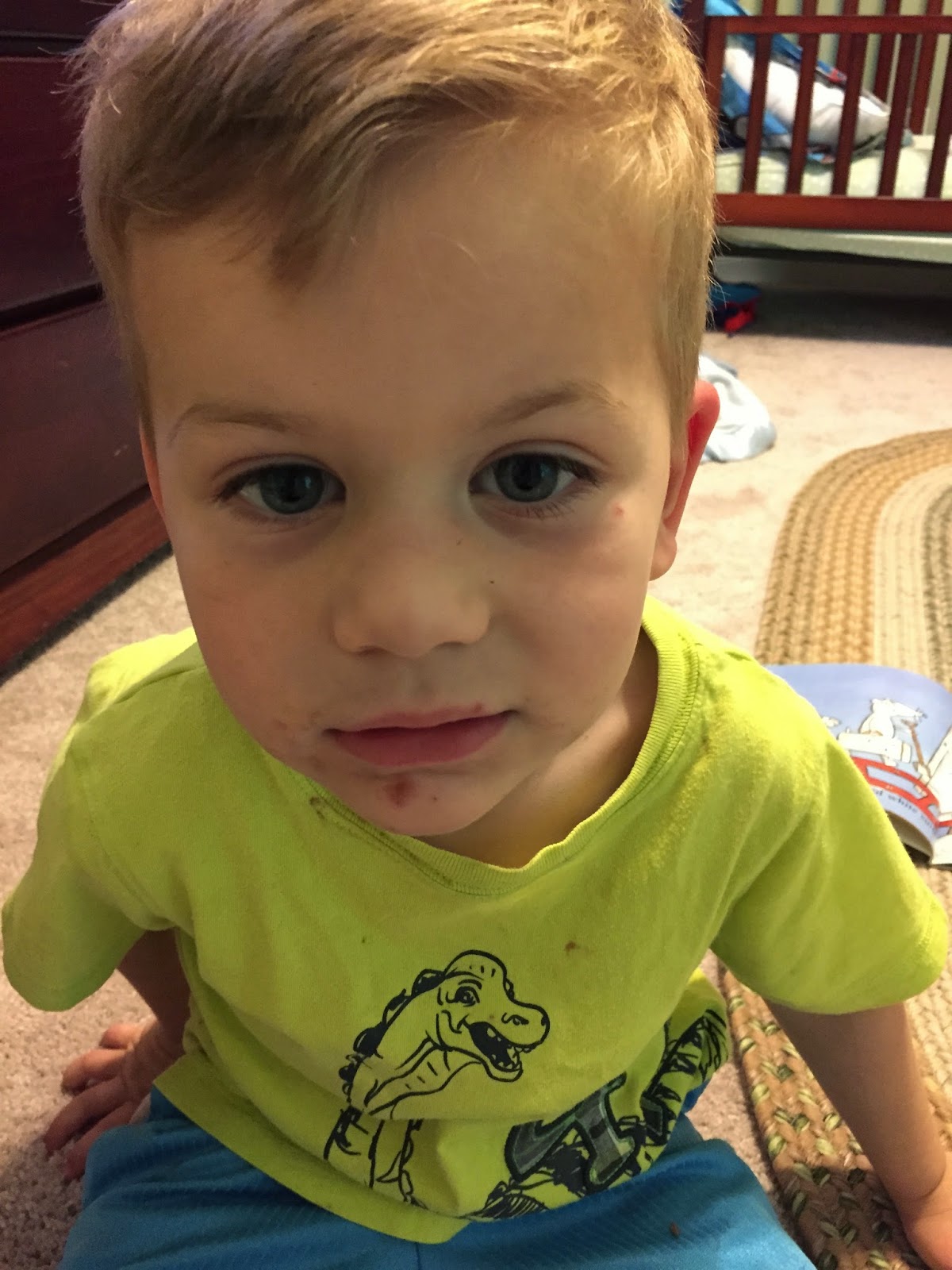 I am perfectly happy (mostly) to keep a sick kid home and take care of him. But keeping a sick yet healthy kid home (especially when you are sick AND sick) is just cruel. And two of them? That's just a "sick" joke.

Leo Says (and does) the Darndest Things 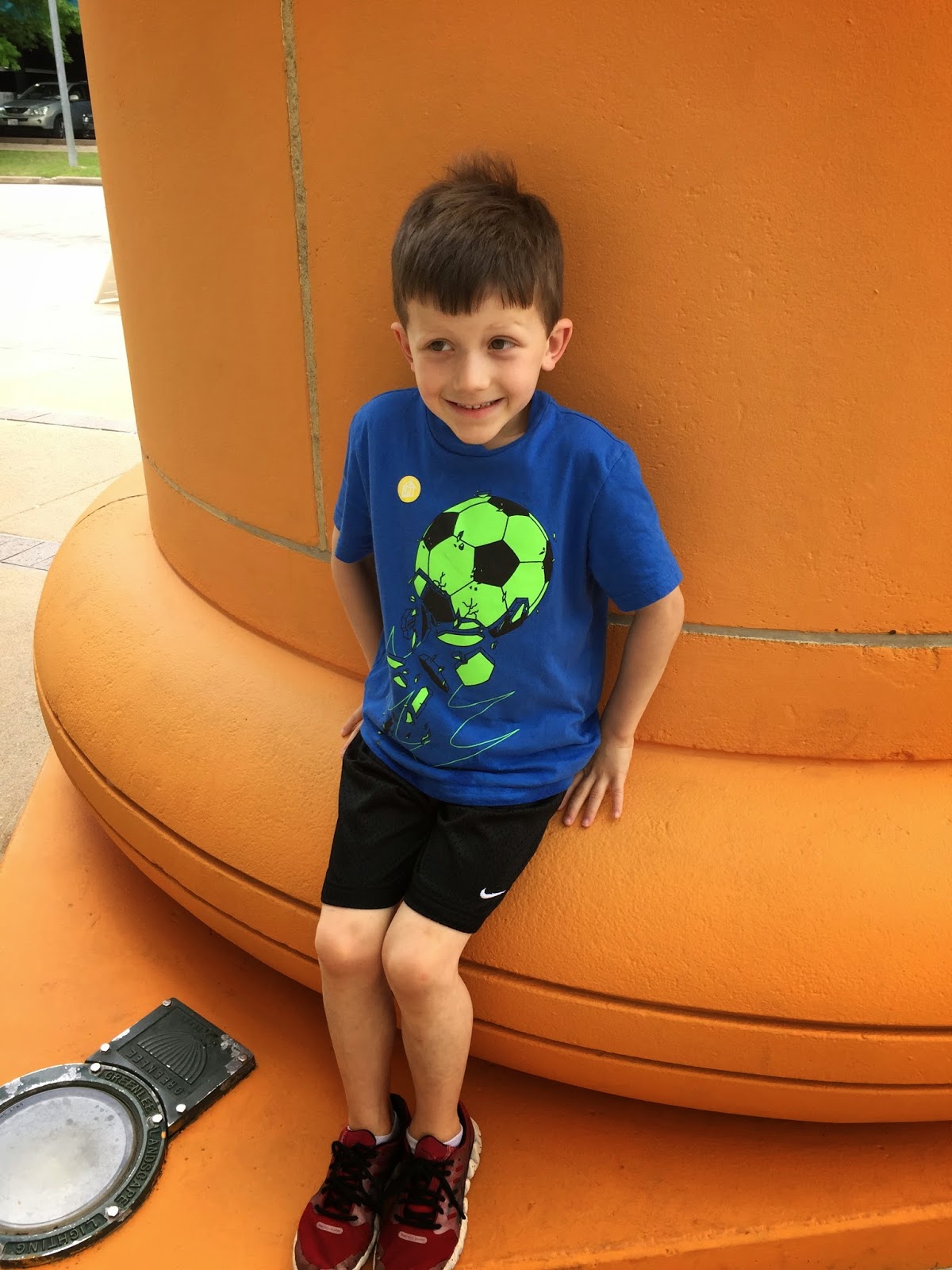 Everyday Leo gets off the bus and reports whether or not he received a sticker (which means he was good at school). Well, he actually only announces it if he DID get a sticker. If he didn't, he says nothing and I know immediately that he got the opposite of a sticker…A CODE.

A code is a letter which corresponds to the rule that the child broke like "A" for not following directions or "D" for not keeping parts to himself. (I guess they felt like "hands, feet and objects" didn't really cover it all.)

So today he told me that he got a sticker and then told me about how "less than seven kids got a sticker." He said that a lot of kids got into trouble for being loud and the teacher said she was going to have to write lots of codes on their behavior sheets.

"I made it up," he said. "It sounds like something Yoda would say, doesn't it?"

I thought it was smart AND hilarious!

And speaking of smart and hilarious, Leo has made his most impressive creation with tape yet. He attached the Cozy Coupe to the wagon using only Scotch tape and shockingly, it worked! That kid puts a lot of faith in Scotch tape. The people at 3M would be fools not to hire him.