Where Would Jesus Park?

It was bad. There were usually 19 cars down our street at one time. (Yes, every day I counted.) When we first went to look at the house I thought, "Is there a party going on?" It was Tuesday afternoon! I was such a fool. But I thought houses with alleys and THREE CAR GARAGES would mean LESS parking on the street.

Oh no. Alleys lead to MORE parking on the street. People are way too lazy to drive down the alley and park their cars in the back of their houses.

One of the only spots without a car on our street was in front of our house. Until one day someone parked there for two days straight. But he wasn't visiting us, he was visiting the people across the street. I marched over there and said as politely as I could, "I don't want us to get off on the wrong foot but is there a reason your guest is parking in front of my house?" She apologized and said she would have him move in front of her house.

And then NEVER spoke to me again. It was quite awkward.

And then you get to MY house.

For the past three weeks there has been a constant stream of cars parked right in front of my house. Sometimes it's just one. But usually there are three. And almost always there is a big black truck with a trailer carrying some large plastic water tank. When people come by my house they say, "Oh, who is visiting?" or "Do you have a friend over?" That is how much these cars are in front of my house.

The situation (so I've heard from another neighbor) is that the people next door to me have family staying with them while they are in between houses. I get it. It's temporary. But I don't know how temporary cause so far it was been 22 days and it is DRIVING ME CRAZY!!

I don't really have a leg to stand on though. The street is not my property, right? They are allowed to park there. My only reasons for complaining are 1). I am tired of looking out my window and, instead of seeing our lovely neighborhood, I see a parking lot and 2). If I were to have people over (which I have in the last three weeks), they can't park in front of my house.

But the thing is my neighbors are really nice. They seem to be the type of people who would not mind at all if I had relatives who parked in front of their house for weeks on end. And I guess that is why they didn't think it was necessary to come talk to us before and say, "Hey, we are going to have our family staying with us for X amount of weeks. I wanted to let you know that they might park some cars on the street, some in front of your house. Oh and one of their cars is a giant black truck with a trailer on it that carries a strange plastic tank of water on it. K?"

I just feel like that would be the Christian thing to do.

In a few weeks I am going to have a birthday party at my house for Leo. If the cars are still parking there I am going to have to say something. But I don't want it to end like my Frisco parking fiasco. So I have been practicing what I could say that would be very diplomatic, kind and reasonable.

"I know you are good Christians and so are we, so that's why I want to say in the nicest way possible…can you move all these damn cars?!!"

"See, I really don't like hoarders and so that's why I don't like cars parked on the street…"

"You're so lucky you have a FOUR car garage! We only have a two car garage but it's okay because we just have two cars."

"Where would Jesus park?"

I'm still working on it.

My Tweaks for Target 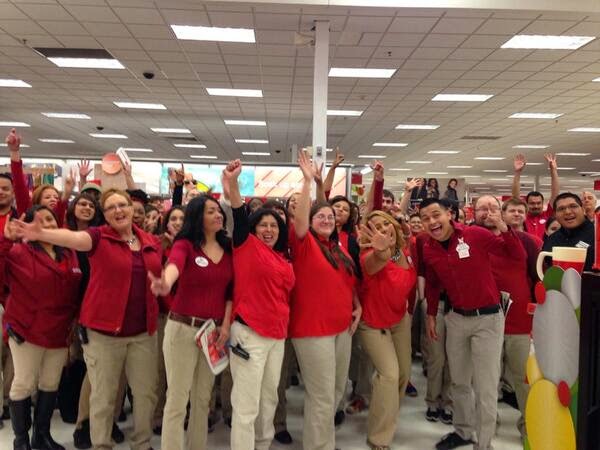 If I ever decided to work in a corporate establishment in human resources, the people at Target would be fools not to hire me. Sure, I don't have any HR experience but I do have TARGET experience. A lot of it. Right there in the trenches.

I've actually distanced myself from the red bullet in the last few months. I didn't do it intentionally. It's not because of that silly credit card snafu or anything. I think it's because it's about four minutes farther from my house than Kroger. But that doesn't make sense because Kroger doesn't have Starbucks, clothes or lamp shades. Still, my red card bill was significantly lower these last few months.

Back to HR: Since I still frequent Target at least once a week, I have some observations about their employees:

First of all, why oh why can't Target issue a standard red shirt? Cause these guys take the word "red" very loosely. They think it includes rose, maroon and neon pink. There I am asking someone  in a burgundy top where the Pull-ups are and she's all, "Do I look like I work here, lady?"

I also think they need consistent educational standards in hiring. Like, you need to at least have a high school diploma or a GED to work there full-time. But you don't need a college degree, much less a masters, like the guys I overheard the other day:

These two dudes were stocking the lame produce section in a non-Super Target. (They still had four-pack avocados--score!) They were both in their early 20s. One guy says something like, "The actual catalyst for the French and Indian War was France's expansion into the Ohio River Valley although many believe it was Great Britain's claims to Quebec." Then the other Target dude said something like, "But it was France's reconnaissance mission that brought about the retaliation of the British troops in the Mississippi Valley."

Huh?? (Btw, I don't even think they were talking about the French and Indian War but it was some war and they were using REALLY big words!) I mean, I could understand that one guy was a war buff and somehow was wasting his genius at Target. But two smarty pants? If I were in HR I would have at least put them in a Super Target.

But today I overheard some Target employees talking that made me think Target does NOT enforce the GED thing.

Target employee talking on his walkie talkie: "Yes, this is Lyle over in bedding. What is a sham? I repeat, what is a sham?  Do you copy? A sham?"

Now it's bad enough that Lyle didn't know what a sham was but there were THREE other employees AND a customer in this circle of nonsense. Lyle went on:

"A SHAM! What is it? No, no, I'm in the bedding section. It says it's a sham! Oh, it's for pillows? Thanks! He says it's something for pillows." And then silently to himself he surely said, "Who woulda thunk it?"

And this was a Super Target! I expect more. I mean, what if one of the war nerds had to stock shelves with Lyle one day? War nerd would be so annoyed. Or maybe Lyle would be.

Or it's quite possible war nerd does not know what a sham is either.

And I betcha neither one of them knows the difference between red and magenta.
Posted by Writinggal at 9:22 PM 2 comments:

Gus is learning about opposites AND Dr. Seuss. Here is what he has to say about those subjects:


Also, I was the "mystery reader" at Gus' school today. I read Green Eggs and Ham in honor of Dr. Seuss. When I made my entrance Gus ran over and hugged me. Then he sat in the chair next to me as I read the book. About three pages in he stood up and screamed,

It was the sweetest. thing. ever.