Oh, dear blog, if you were a child, you would be taken away from me. Because I have neglected you. But I vow to do better. Tonight, I suddenly remembered that you existed, and thought, "I need to write a post on my blog!" But what to write about? When I used to post daily (obviously, pre-kids), I would say to Frank, "What should I write about on my blog tomorrow?" and he would answer, "The pressures of writing a blog."

So with that, I give you a little bundle of what's been going on here--at my house and in my brain.

He had his first sleepover about a month ago. (I'm so behind!) He and his best friend John joined about seven other boys to celebrate Etienne's seventh birthday. Etienne's parents were so brave to do this as it was a lot of the boys' first sleepover.  The boys loved the Minecraft theme (Leo's latest obsession)--they swam, made Minecraft t-shirts, played Minecraft bingo and watched a movie before eventually going to sleep. 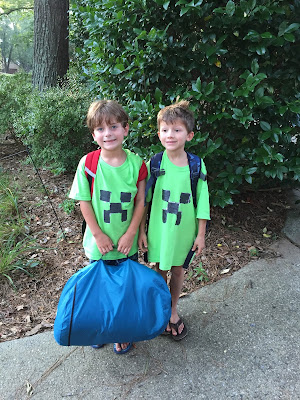 The other thing going on with Leo is a massive exodus of his teeth! He was a late bloomer in this department but he has lost three since June. So that is an average of one a month. He has lost two bottom teeth and a top tooth. I don't know how this kid eats! The tooth fairy has been generous but not TOO generous.  For his first tooth, he got $5 and a spy pen that coincidentally I had bought for him at Cracker Barrel six months earlier and had never given to him. For the next two he got a dollar per tooth. I hear that sometimes the tooth fairy gives more money for a tooth, if it was a tooth that she was low on. 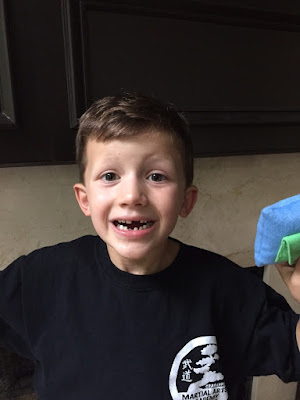 Then there's Gus. When he's not pooping in his pants, Gus is mostly delightful. He asks LOTS of questions. Like sometimes he just goes on a question-asking binge:

"Gus, here is a dish towel so you can clean up the water you spilled."
"What's a dish towel?"
"It's a towel that you use in the kitchen, usually to dry dishes."
"What are dishes?"
"The plates that we eat on, the glasses we drink out of."
"What is a drink?"
"You know, a liquid that you put in your mouth like water or juice."
"What is a liquid?"

It could go on all day.

Gus is also into Paw Patrol, his shoo shoo (which he still takes everywhere) and pretty much anything Leo is into (Minecraft, Star Wars and losing teeth). 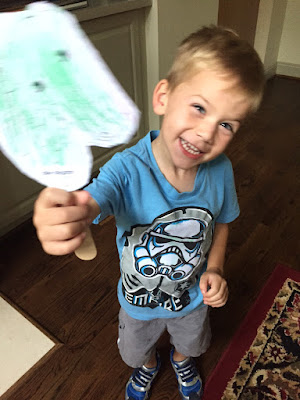 As far as what's going on in my head…there are two things. Okay, hopefully there are more than two things, but two things I'd like to share:

I really don't see the point of business cards. If I want to find you, I am not going to go search for a little piece of paper. I will just look you up in the phone book. Duh.

Just kidding. I mean, I guess sometimes you can't remember someone's name so you need the card to remind you? But I usually do remember their name or their company's name…at least enough to Google them and find their number. I so badly want to refuse business cards when someone hands theirs to me. But I know that looks crazy. So instead I just throw them in the trash. Because even something as small as a business card can cause clutter. It's like gateway clutter.

While I'm at it, I'd like to say I also don't like appointment reminder cards. I'm just going to put the appointment in my phone and throw away the card.

And then I've got one more Facebook cliche that I'd like to shed light on. Suddenly, every mom wants "time to stand still." Yes, the kids are cute in still photos and yes, they do seem to grow up quickly. I get it. But the other day I saw someone wish her "sweet" eleven year old son a happy birthday and she added #timepleasestop

You want to make someone stay an eleven year old boy forever? That is just cruel.

And since this blog is such a jumbled mess, I just want to say #timepleasekeepgoing

I have a little game I like to play:

Whenever I am perusing Facebook and see a birthday message for a kid, I try to see if the poster can possibly wish their child a happy birthday without calling him or her "sweet."

So far, no one has done it. Everyone MUST describe their child as sweet. They can't help it. Sometimes they throw in other adjectives like kind, caring, amazing. But never do they leave out sweet.

And this perplexes me. One because my own kids are anything but sweet. Second, my experience with other kids is that they too are not sweet. Sometimes I actually know the kid who has so sweetly survived another year of life. And I think to myself, "That brat? Sweet? Really? That's the best word you could come up with? I could come up with a lot more."

Obviously the adjectives should be positive. I mean, it's the kid's birthday. And probably, he or she does have some redeeming qualities. I usually use clever, creative and funny to describe Leo in such posts. But if I was being totally honest, I would have to add whiny, short-tempered and annoying:

Happy Birthday to my first born, Leo--we love you because you are clever, whiny, creative, short-tempered, funny and annoying! #timeflies #blessed


But back to those sweet kids. I have two theories. Their parents are either:


If they're lying, I think they don't even know it. I think, in the moment, they actually believe their kids are sweet. They think back to the one time the kid said, "I wuv you, mommy" and forget about all the "I hate yous."

And if it's the second, well whaddya gonna do? That's just me being a word snob.

Or perhaps, there are actually a few sweet kids out there. My niece Ellie can be sweet. She once offered to carry my things in from the car for me. I let her hold my phone as a thank you. Two minutes later she gave it back to me. I'm still in shock. But that's not so much sweet as it is un-freaking-believeable.

Even if one of my kids miraculously becomes sweet, I'm still going to avoid that adjective:

Happy Birthday to Gus--we love you because you are feisty, smart, violent, adorable and so darn lazy that you'd rather poop your pants than go to the potty. #youdontsmellsweet