How Scott Bakula and I are alike

I have a lot in common with this guy. Not Scott Bakula, the actor (although that would be really awesome because he is obviously a stellar dude). I mean his character, Sam Beckett, from the hit TV show of the early 90s, Quantum Leap. 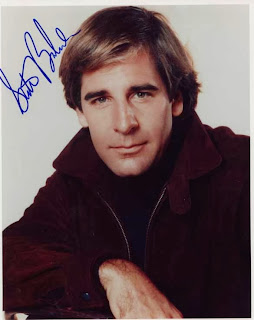 You see, Sam used to jump into a different body and time period each week. Now, as a freelance writer, I don't get to jump into anybody's body and I am rarely in a different time period but bear with me. I can make the connection. I do jump into different worlds all the time. And whatever world I am writing about, I soak it all up and sometimes even live in it for awhile. Here are some of the worlds I have had the privilege of leaping into:

While writing these pieces, I am captivated. (One exception? Drought-resistant landscaping). I'm usually like, "Wow. This is amazing. I had no idea hot yoga could be so invigorating, going on a culinary trip could be so life changing and that people could have so many kids and still seem normal." But what my subjects don't always understand is that I am writing an article, usually between 500 and 1,200 words. They often think I am writing a book. They want me to come visit them, spend hours and hours listening to them talk about the subject they are so passionate about. So that is a big part of my job, politely letting them know that I just need the Cliff's Notes. I wonder if Sam Beckett had the same challenge. "Look, I love it here in the Wild Wild West but I can't stay forever. I gottta leap into another world next week."

For this month I leapt into the world of pawn shops. That was a big leap for me because I had never even been in a pawn shop before. But they didn't disappoint. It's good, fascinating stuff. I'm posting it here so you can leap too: 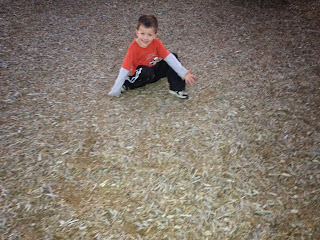 The other day Leo told me, "I wrote an article. It's a true story." He then showed me some pictures he had drawn and told me the story. I said, "You're a writer like mommy!" He said, "I saw it on Word Girl."

So maybe I'm not his inspiration but I still think the guy's got some talent. Here is a card he made for his teacher: 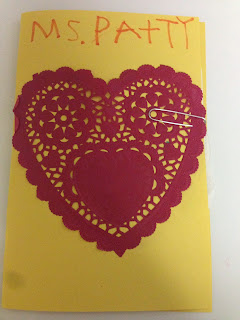 He told me a story and I wrote it for him. 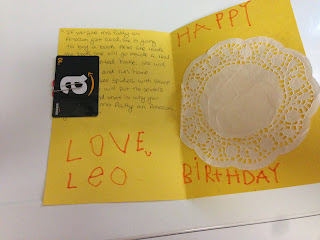 And here is how the story goes (in the style of "If you give a mouse a cookie" if you're not familiar):

I was impressed. I mean, I didn't write my first short story until first grade. And I would say this was just as good as Tammy the Dog.  Well, maybe I'm giving him too much credit. Tammy the Dog is a masterpiece. Nevertheless, Leo's story was a solid effort for a five year old. And I think Ms. Patty got a kick out of it.

Chatter from Leo and Gus

Now I've got two talking heads on my hands! And they both say hilarious, interesting and shocking things. Every time Leo or Gus says something that makes me smile, I jot it down on my phone. 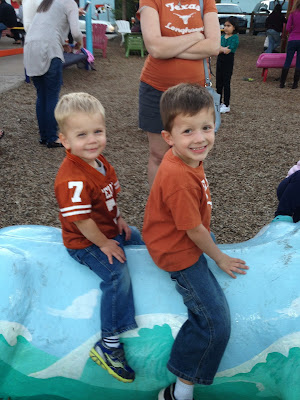 "Scientists think that volcanoes were caused by gods. But we know that there is only one God. I guess scientists didn't go to Pre-K."

Leo created this game which involved throwing a beer bottle cap at a piece of tape on the wall. I was not successful in hitting the target so he said, "Mommy, you have to, like, believe in yourself. Or pray about it. Dear God, help mommy to believe in herself and hit the target."

I was telling Frank how I bought some new Pyrex dishes. Leo came up and said, "I want to see them!" I said, "See what?" He said, "My new pirate dishes!"

His teachers told me this one: At school they took off their shoes to play in this tent. When they came out and put their shoes back on, the teacher told him, "Leo, your shoes are on the wrong feet" and he just crossed his feet :)

"I'm different. I have more powers than other people and I don't like Polo shirts. I'm happy that I'm not like everyone else."

Notice a lot of Leo's are of a religious nature. And on his report card, he got his highest marks in that area: knowing the sign of the cross, reciting the Lord's prayer and reciting the Hail Mary.

He thinks motorcycles are called "recycle bins." We don't correct him. He saw someone riding a motorcycle wearing a bandana and he said, "Look! A pirate riding a recycle bin!"

Gus and I were reading a book and Leo came into the room with some crisis (typical). I helped Leo and then sat back down with Gus to read. I said, "Now, where were we?" Gus said, "In our house!"

We were at Gus' swim lessons and he asked for his shoo shoo. I told him it was in the car. So when we got in the car and saw it he said, "We were just talking about shoo shoo!"

It was chilly the other night so after Gus went to sleep I snuck into his room and put a soft blue blanket over him to keep him warm. In the morning i saw he had thrown it out. He pointed to it and called it a towel. I said, "No, it's not a towel. It's a blanket." He held up his shoo shoo and said, "No, THIS is a blanket!"

Gus and I were at Wal-Mart and he said, "I saw Ho, Ho, Ho!" (That's what he calls Santa and there were lots of Xmas decorations up already). So he keeps saying that while we're shopping and I'm like, "That's right, Gus. There are lots of pictures of Ho, Ho, Ho around here." Then we pass a guy with a long white beard. Apparently HE is who Gus saw so Gus waved at him and said, "Hi, Ho, Ho, Ho!!"

And here are my two talkative boys at the UT/Kansas game--Gus' first! 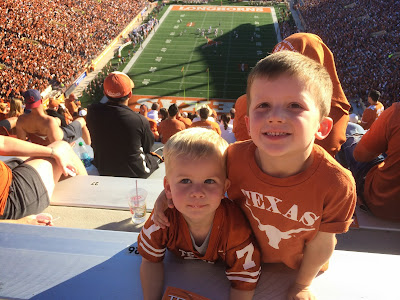 Among the many things nobody tells you about having kids is the fact that Halloween goes from September 15th thru November 5th. And the candy is here till well after Christmas.

As I type this blog Leo is watching "It's the Great Pumpkin Charlie Brown." Me, I'm over it! But Leo LOVES Halloween. He claims he is not scared of anything. Yet he refuses to deliver the neighbor's newspaper during the month of October because they put a mummy on their doorstep.

Gus got into the spirit too. He originally asked to be a football player but Leo convinced him to be Yoda. See, Leo was planning to be Darth Vader and as he said, "Don't brothers usually match?"

Frank and I even wore costumes this year; do couples usually match? And if so, do a cave woman and beer pong man go together? I'm not sure but I was just excited that I made this seven layer dip look like a spider web for a Halloween party! A Pinterest success! 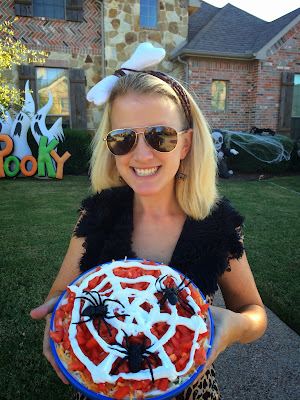 Okay, and here's my October photo dump: Halloween party, pumpkin patch(es), Trick or Treat at Frisco Square, Preschool Halloween parties and just one shot of trick or treating in the neighborhood! 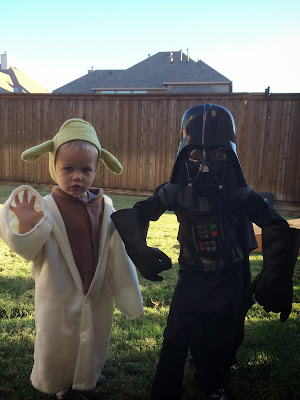 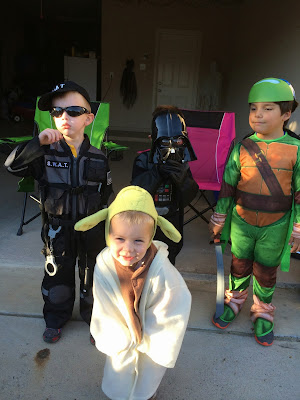 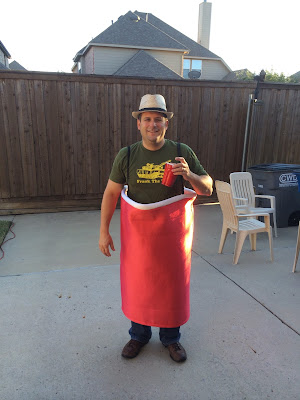 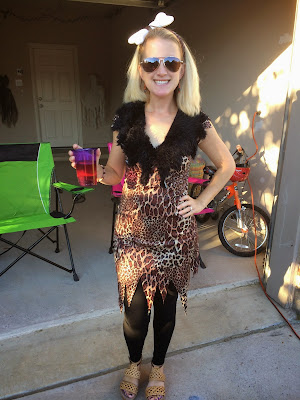 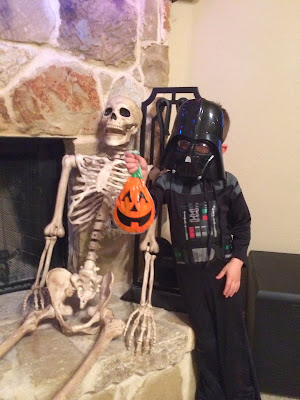 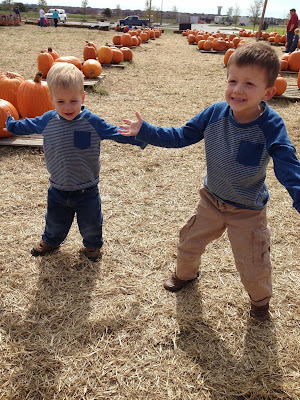 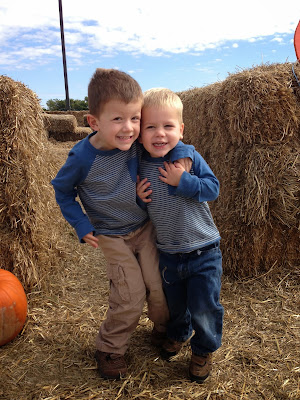 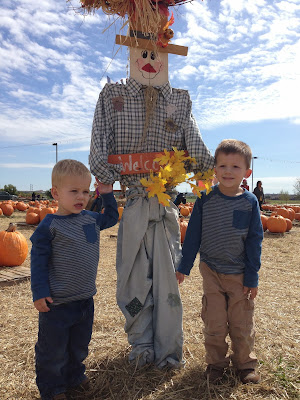 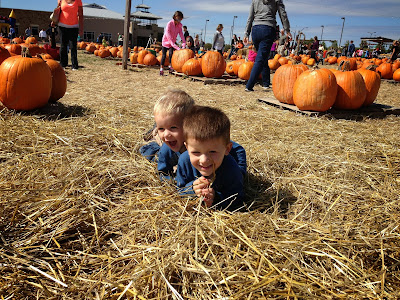 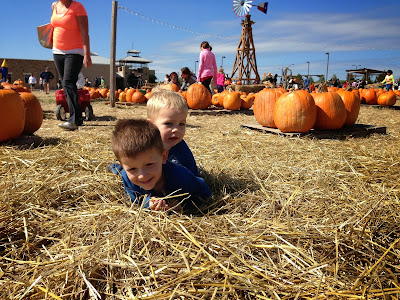 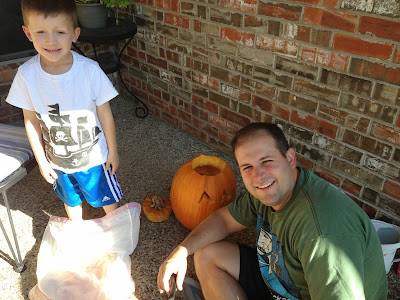 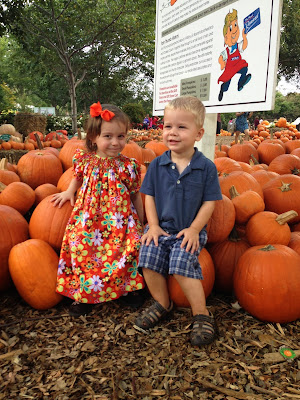 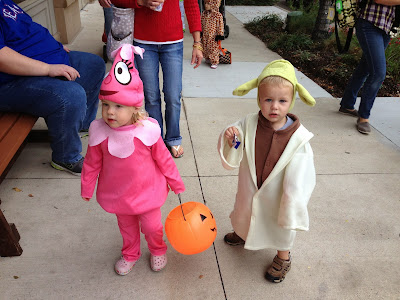 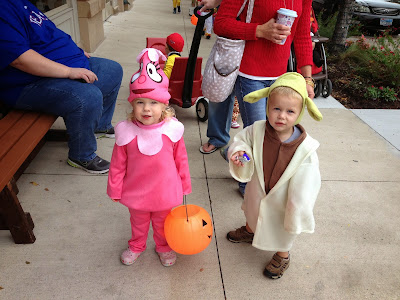 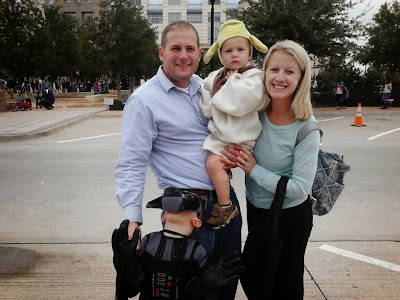 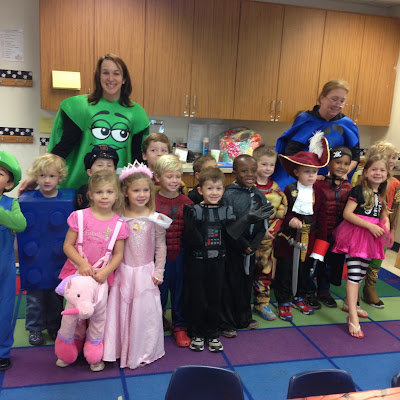 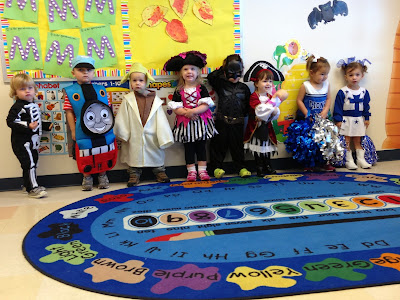 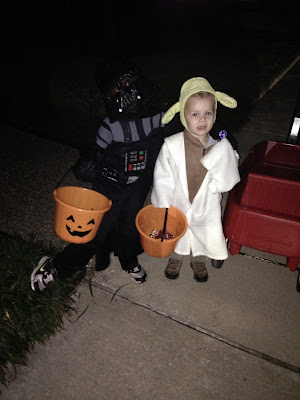